When visitors enter the new Schulich School of Business building at York University in Toronto, many immediately pick up on two features that are often conspicuously absent in modern structures: for a large campus building, the light-filled space is surprisingly quiet while the air is unexpectedly fresh.

“People comment about the air,” says James McKellar, a professor of real estate and infrastructure who serves as associate dean and oversaw the development of the $50 million project, known as the Rob and Cheryl McEwen Graduate Study and Research Building. “In a normal building, the air is constantly being re-circulated. In our building, the air is very fresh and people notice.”

Visitors also observe that the windows open (a rare feature in some newer institutional or commercial buildings), and attribute the fresh air to this seemingly cosmetic feature. In fact, the explanation for the McEwen building’s air quality tells the story of a much more involved and – for Canada, unprecedented – “bioclimatic” design concept that introduces some salient ideas about dramatically improving energy efficiency in built form. McKellar, an architect by training, says the McEwen building will use 74% less energy than a comparable campus structure.

Designed by Toronto-based Baird Sampson Neuert Architects, the project draws heavily on German technology, as well as age-old insights about the way buildings can naturally absorb and expel excess heat and cold. The focal point is a so-called solar chimney – a five-storey-high concrete slab surrounded by glazing and oriented, like the rest of the building, to maximize solar exposure. In the winter, it absorbs the sun’s heat and draws in fresh air. In the summer, the chimney functions as a convection oven, drawing hot air up and out of the building, thus expelling air-borne chemicals that cause indoor air to become stale and oppressive. 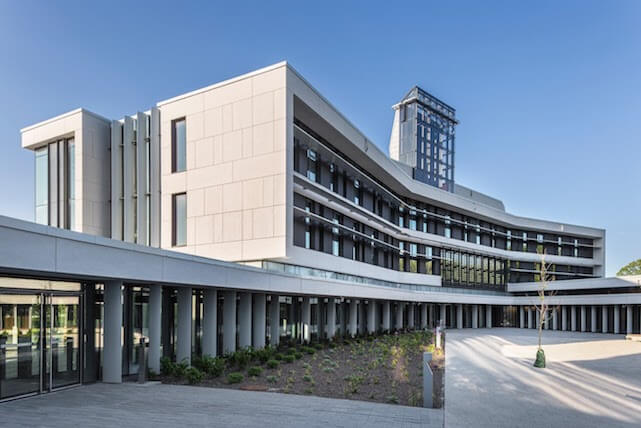 Instead of forced-air based heating and air conditioning systems, the McEwen building uses an extensive network of water-filled tubes that regulate temperature using thermal exchange systems linked to air moving through the chimney. This radiant system, in turn, is linked to a network of 150 computer-operated windows and shades that are automatically adjusted according to ambient temperature and weather – a design developed by Transsolar, a German environmental engineering firm.

Shorn of the technical elements, McKellar notes that the core design principles trace back to historic architectural techniques that recognize how to use materials, shade, and orientation to mitigate the impact of hot and cold weather.

Looking ahead to a warming future and the imperative to reduce energy consumption, McKellar says Schulich sought to adopt a radical approach instead of more conventional techniques, such as LEED (Leadership in Energy and Environmental Design) certification more common to office buildings, out of a recognition that the climate crisis demands game-changing solutions, not incremental alterations.

“We have to be prepared to make that quantum shift,” he says, noting that the cost-per-square foot didn’t exceed the capital costs for comparable campus structures but will generate energy savings in the order of $80,000 to $100,000 annually. However, the project did require expertise that’s not (yet) available here.   There has been one other important financial learning: the innovative project galvanized Schulich’s donors, including the federal government, which provided a $15 million grant. “It had a huge impact on our ability to raise money.”