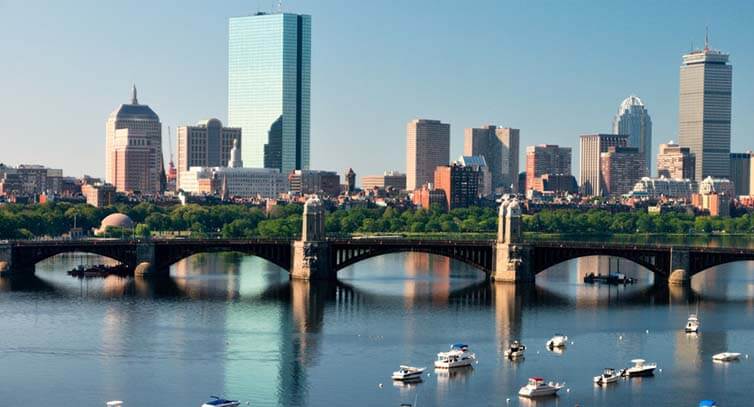 Boston Skyline over the Charles River. Photo by Matthias Rosenkranz

As this year’s hurricanes marched across the Caribbean into the Gulf Coast or out to the North Atlantic, cities along the U.S. northeastern coast knew they were dodging bullets. If Boston gets hit by a storm like Hurricane Harvey, mayor Marty Walsh acknowledged in a radio interview, “we are wiped out as a city.”

Back in 2012, Superstorm Sandy offered a heads-up on hurricane risks – killing 43 people and causing $19 billion (U.S.) of damage in New York City alone as it pulled in a surge of seawater that rose more than 1.5 metres above ground level in many neighbourhoods. If Sandy’s remnants hadn’t missed Boston’s high tide by a few hours, a similar storm surge would have swept across low areas of the city.

Today, a Massachusetts Institute of Technology (MIT) analysis suggests, a Category 1 hurricane with a few feet of surge on top of a high tide could flood a quarter of a million Boston residents. And climate change is bringing more intense storms and rising tides. 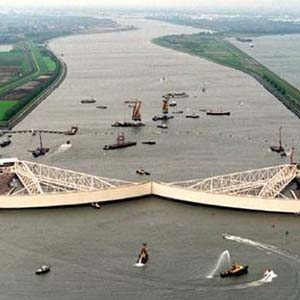 The Netherlands’ Maeslantkering storm surge barrier has doors that open and close to both allow access to and protect the port of Rotterdam. Photo via Wikicommons

Like other coastal metropolises, Boston is working on projects large and small to meet these threats. Most dramatically, the city is considering building a giant seawall across the harbour, somewhat like the huge barriers that now protect New Orleans as well as Rotterdam and a few other European cities.

Boston is enjoying good economic times. Construction is booming along the harbour, which was cleaned up by a multi-decade megaproject that was officially completed in 2016. There is also a working political consensus to take on climate change that extends to the state level, where the governor last year signed an executive order to plan for climate change mitigation and adaptation.

But launching a multi-billion-dollar, multi-decade megaproject like a giant seawall, in a country that often fails to maintain its existing infrastructure, is no simple task. To get things started, experts say, the city and its partners must plan long and hard, with all the project options and alternative approaches on the table, and keep local residents and other stakeholders involved from the start.

When European settlers arrived, Boston was all but an island. More than half of the modern downtown is built on tidal land, and some parts routinely flood even in calm weather. Like the rest of the northeastern coast, the area has been subsiding very slowly into the sea, about 23 centimetres during the 20th century. Now the city expects much quicker sea level rise, with 0.9 metres commonly expected by 2070 and perhaps more than three metres by 2100. 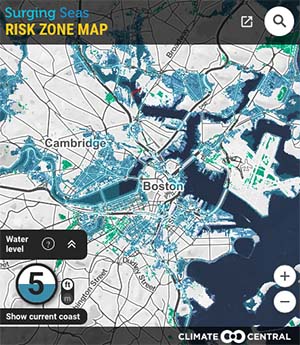 Rising tides are arriving along with rising risks of big storms. Boston hasn’t been hit head-on by a hurricane for decades. But as waters warm, Atlantic hurricanes appear to be growing more frequent, bigger, stronger and wetter, and they also seem to be maintaining their strength farther north along the U.S. coast, according to Kerry Emanuel, professor of atmospheric science at MIT.

The city presented its current framework for protecting its shores in its Climate Ready Boston plan in December 2016. The plan sets out many options to protect against storm surge, sea level rise and intense rainfall like that which swamped Houston during Hurricane Harvey.

Options for resilience range from reconfiguring waterfront land as green space to installing specialized protections for key infrastructure to building berms, dikes, dams, temporary flood barriers and buildings that can withstand deep flooding. The plan does not, however, follow up on a 2014 proposal to start cutting canals.

A few new facilities are taking on storm surges as an individual challenge. The poster child for this response is the Spaulding Rehabilitation Hospital, which opened in 2013 with generators on the roof, barriers and berms to hold off floods, and even a roof over the entrance that can act as a dock if water gets that high.

But as a surge could simply flood most of Boston’s buildings and key infrastructure on or near the waterfront, various proposals for seawalls have been floated for decades.

Currently, researchers at the University of Massachusetts Boston are putting together a feasibility study of two alternative barriers. One would stretch six kilometres between Winthrop and Hull, two nearby towns that bracket the entrance to the outer harbour. The other and much shorter one would cross the entrance to the inner harbour from Logan Airport to South Boston.

Scheduled for December release, the report “will not say whether we should build a barrier,” says project leader Paul Kirshen, a UMass professor of climate adaptation. “It will look at the practicality of the whole concept. If the city decides to go ahead with this, then there will be a lot more detailed studies.”

In 2014 Sasaki Associates, a planning and design firm in Watertown, Massachusetts, gave a first-guess price tag of $10 billion (U.S.) for the larger barrier and a quarter of that for the inner-harbour barrier. Kirshen says the upcoming report will provide wide ranges of estimated costs, reflecting uncertainties about the local seafloor and many other factors.

Given that a single storm event might inflict more than $10 billion of damages on the city, these costs may seem quite reasonable. “If you build a storm surge barrier for Boston that costs $5 to $10 billion, there will be a payback on that cost that makes sense,” says William Golden, executive director of the National Institute for Coastal and Harbor Infrastructure in New York City. “It’s almost unavoidable. Not to do it is a disaster.”

But a seawall must be weighed among other options to protect the metropolis, experts agree.

“We’ve got to think about the impact of climate change from inland to the coast, out into the harbour and the harbour islands and beyond,” says Kathy Abbott, president and CEO of Boston Harbor Now, a nonprofit organization located in the city. “You can’t solve it at any one point.”

The solutions may include approaches that environmental groups might have opposed until recent years, such as building barriers, she notes.

The seawall is a popular option, at least before details emerge about funding and impacts, because for some people it might push the solution literally out of sight. “There’s a human tendency to want a quick fix that maybe doesn’t impact you directly,” Abbott says.

For example, many new apartment buildings now dot the Boston Harborwalk, a public park along 69 kilometres of shoreline. “If you just paid $2 million for your waterfront condo and we raise the Harborwalk [to act as a barrier] and you can no longer see the harbour, you’ll care deeply about that,” she says. “If instead, we could just build a wall a couple of miles out in the harbour, you might prefer that option.”

The city needs a barrier, but that’s only one part of the resilience problem and far from the most urgent, says Alan Berger, MIT professor of landscape architecture and urban design.

“As we’ve learned from the Dutch, the only way to really protect against climate change is to have redundancy in the system,” says Berger. “If Boston only builds a flood wall to protect against storm surge, and that wall breaks, the whole system would fail, 27 cities and towns would be flooded, and half a million people would be impacted.”

Moreover, a seawall wouldn’t help with chronic tidal flooding or the coming more frequent and intense rainstorms that can also flood the city.

It’s more urgent, Berger says, to build a first line of defence with flood walls around the city’s most critical infrastructures in vulnerable places.

Next, other measures can follow on a district-by-district basis. “If we start the districting process now and start working with stakeholders in neighbourhoods, we can start to develop plans to get us closer to shovel-readiness,” Berger says. “Then when a disaster happens and there’s a federal outlay, we don’t have to wait 10 years to start talking about it and getting approvals before we can move.”

Once the seawall feasibility study is out, “the next step will depend on the content of the analysis – the costs, the time frames, the effects on economy and ecology, and the alternatives,” says Carl Spector, Boston’s commissioner of the environment. “How will those measures compare to more localized measures we’re taking?”

This fall the city will propose specific local projects for the areas most vulnerable to chronic tidal flooding. These initiatives already are going hand-in-hand with community involvement – for instance, open houses on climate change adaptation, including the opportunity to play a game that examines waterfront protection options.

“The residents, the major institutions and the businesses of Boston are very supportive,” Spector says. “The discussions we have with all sectors of the community are not about whether we need to prepare for climate change. They are very healthy discussions about the best ways to do it.”

Such conversations are taking place elsewhere along the coastal United States where other sea barriers are proposed.

One is the long-contemplated “Ike Dike” around Galveston Bay and Houston, which is gaining acceptance after this summer’s disasters. Another, a two-wall New York barrier, would close both the main entrance to New York Harbor and the East River. The main seawall, Golden says, would be a five-mile-long, 30-foot-high barrier from Sandy Hook in New Jersey to Queens in New York City. “For the next 100 years or more, you close it at low tide before the next storm, and it’s low tide along 820 miles of shoreline in the metropolitan area,” he says. Such a barrier system would supplement a range of other resilience projects underway or in planning.

“We’re living in two realities about disasters,” Golden says. “The old reality says that we’re victims of nature, and all we can do is pick up the bodies and the garbage and the destruction after it’s over. But we’re facing a new reality that can’t afford the levels of disaster that are coming our way. We need to switch our federal policy from disaster relief to investing in disaster prevention. We can do that by reimagining the coastline of the United States in light of this new reality and develop what I call an interstate coastal infrastructure system, much as we did with the federal highway system.”

As Harvey, Irma, Maria and Nate have smashed in, “it’s an arresting moment, and it focuses our nation on our exposure and our vulnerability to these storms,” says Erika Spanger-Siegfried, senior climate and energy analyst at the Union of Concerned Scientists in Cambridge, Massachusetts.

“Where in the past we would simply talk about recovery and rebuilding, you now also hear quite clearly in lots of high-level statements the need to build back stronger and to build resilience. Because clearly the next storm is coming.”

The article first appeared in Ensia