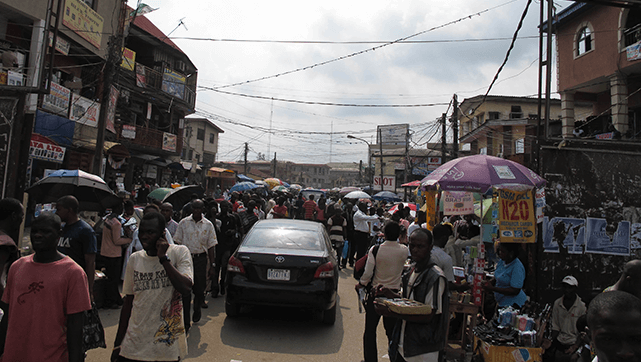 Canadian and U.S. cities arrived early to the party and mingled with their friends from Europe, soon followed by those from Japan. Resources were plentiful. Spirits, for the most part, were high. Recently, cities like Jakarta, Sao Paulo, Mumbai, Johannesburg and Shanghai have added to the mix. And soon the really big players like Lagos (Nigeria), Kinshasa (Democratic Republic of the Congo) and Dar es Salaam (Tanzania) will join and really shake things up.

The world is undergoing an enormous wave of urbanization. Students graduating today will see a doubling of the world’s urban populations within their careers. And almost all of the three billion new urban residents will live in the burgeoning cities of middle- and low-income countries – that is, “the south.” The world’s rush to urbanize is already having profound impacts on Canadian and U.S. cities, especially the larger metropolitan urban areas.

Today, 15 of the world’s 100 largest urban areas are in the U.S. and Canada. The Greater Toronto Area with 5.4 million people is the 50th largest city in the world and Montreal, the only other Top 100 Canadian city, is 87th. The U.S. has 13 cities in the Top 100 starting with New York City in sixth place.

Fast forward to 2050. Even though populations are expected to grow considerably in all cities, the U.S. and Canada will still lose three or four cities from the Top 100. Project further into the future and the Top 100 number drops even more. The projections are a little murky but a few things are clear. By 2100 Canada’s only large city, Toronto, is barely in the Top 100 list, hanging by the nails in 96th spot. The U.S. has only six. New York City is still the largest but drops to 22nd place. 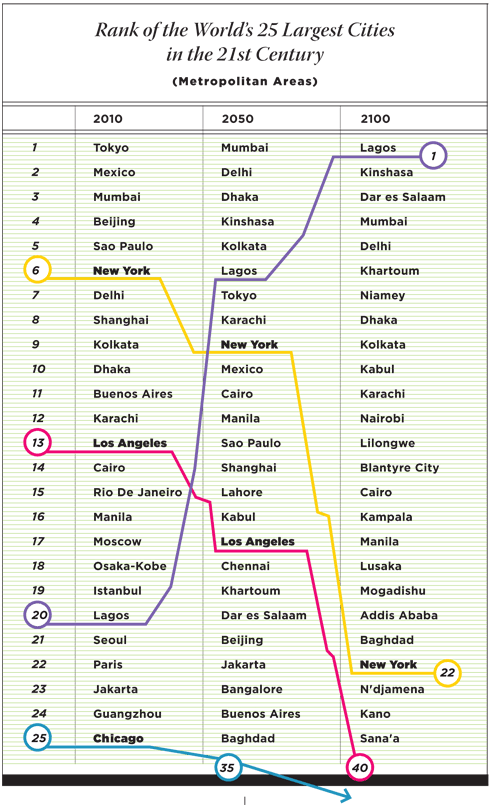 Toronto is a good example of how North American cities are running ever faster yet still falling behind their global large-city peers. Linked to Toronto’s impressive growth, from 2001 to 2011 total annual passengers at the city’s Pearson International Airport increased from 28 million to 33.4 million. Despite this 20 per cent growth in annual traffic, in just a decade Canada’s busiest airport (by far) dropped in the global ranking – to 38th from 26th.

The growth in Asian air traffic swamps anything today happening in North America or Europe, and Asia is a precursor for Africa. The African continent is just getting started on its urbanization path. By around 2050 Africa will have more people living in cities than all of East Asia, and by the end of the century Africa will have as many people living in the Top 100 cities as the rest of the world combined.

Roughly speaking, the volume of Canada’s voice at the close of this century will be half what it is today, and most of the influence will come from Toronto. This is similar for the U.S., where most of the diminished remaining influence will be through New York City, Los Angeles, Chicago, Miami, Philadelphia and Dallas.

Clearly, Canadian and U.S. cities need a new approach if they are to continue to have global influence.

Not that bigger is always better, but when it comes to the global economy and international influence, large cities matter. Large cities are like stationary aircraft carriers within a country’s global power base. Big cities are the vehicles through which countries most influence global events. Big cities finance the soldiers, weaponry and embassies abroad while at home they drive the economy, patents, higher education and innovation. The world talks through its cities, and bigger cities almost always have a louder voice.

The selection of Cardinal Jorge Mario Bergoglio from Buenos Aires as Pope Francis is another example of how economic heft and influence are shifting away from traditional power bases like Europe, Canada, the U.S. and Japan. This shift of power presents enormous opportunities but also threats to the U.S. and Canada. The greatest opportunity is likely not the supply of commodities and agriculture products, but rather provision of urban services, institutional support, and working together with emerging markets to help cities develop and operate in a more sustainable way.

The rise of North America’s big cities is illustrative as history looks to repeat itself, only this time in Asia and Africa. Of the world’s larger, more affluent countries Canada was one of the earliest and fastest to urbanize. Spurred by many young rural men enlisting (and heavy casualties in World War I), Canada surpassed the 50 per cent urban mark around 1921. The country’s fast-paced urbanization manifested in many ways; for example, with so few rural workers, Canada became a world leader in tractors and mechanized farming. Parts of the United States followed the same path.

There was much fanfare last month as Toronto proper nudged past Chicago to become the fourth-largest city in North America. However, the Greater Toronto Area is still three million people smaller than Greater Chicago. Overall urban area is a much better measure of the economic and cultural heft of a city than the inner core alone.

A few strategies for U.S. and Canadian cities emerge as the world’s centre of urban gravity shifts southward. If Toronto and Chicago strengthened partnerships, for example, they would emerge as even more critical urban centres for their countries. Greater Toronto and the rest of Canada will also need to work more closely together as Canada faces increased geopolitical and climate turbulence. Miami, New York City and Philadelphia present particular vulnerabilities. Sea level is expected to rise by 0.5 to 1 metre by the end of the century and all three coastal cities are located in common hurricane track paths. Miami and New York City are respectively the world’s first and third most threatened cities with $5.7 trillion in combined assets likely exposed to coastal flooding by the 2070s.

On their own, with their provinces and states, and occasionally with the help of their national governments, as well as through city associations like C40, Metropolis and ICLEI, all larger Canadian and U.S. cities are working in some way toward greater sustainability. Their key sustainability objectives include enhanced resilience and risk reduction, securing basic service provision such as water, food and energy, strengthened community involvement in city functions and for many cities a much greater focus on transportation (as these large cities compete globally they will need to effectively mobilize as many residents as possible across the urban area).

A newly emerging sustainability priority is the building of stronger and more cooperative international partnerships. Watch for pragmatic partnerships between cities like Toronto, Chicago, Dallas and New York City with cities like Sao Paulo, Bogota, Seoul, Jakarta, Beijing, Dar es Salaam, Lagos and Johannesburg. As most of the larger-scale climate, economic and security threats to Canadian and U.S. cities are common across the world, cities have a greater incentive to cooperate.

Continued economic prosperity for North American cities is mainly conditional on how well they can integrate themselves globally; how well they are able to influence improved urban service provision around the world; and, how well the systems and institutions they develop to meet the needs of sustainable development are emulated and exported. When your voice is about to be halved it’s important to ensure that your input is pragmatic, profitable for all parties and doubly persuasive.

One challenge all North American cities have in common is a severe infrastructure deficit. Cities like Chicago, Toronto, New York City and Philadelphia are like middle-age players that became soft in the belly. Transportation deficiencies are the most noticeable, but power, water and wastewater systems are also often sclerotic. While the cities of the south need new infrastructure, North American cities need extensive and urgent improvements to existing infrastructure. As an example, Chicago Mayor Rahm Emanuel intends to spend $7 billion over the next three years just to start addressing the city’s backlog.

As the relative political influence of Canadian and U.S. cities falls over the next several decades, a new opportunity arises. More cities in countries like China, India, Tanzania, Nigeria and Indonesia will need expertise in urban service provision. Building and rehabilitating cities is the world’s fastest growing market and success benefits everyone. The worst thing North America’s big cities can do now is rest on the past. Efforts need to be redoubled to build better cities in our own countries, and then to export this expertise.