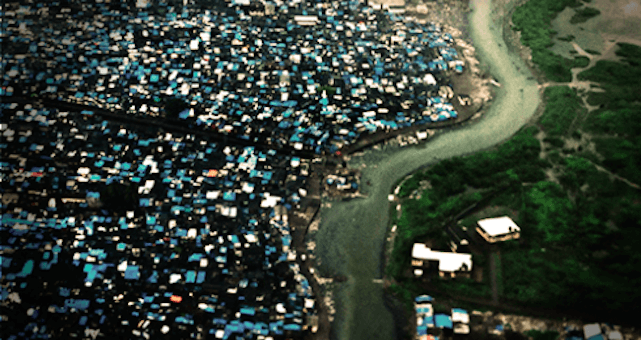 The world is on the move – and butterflies and wildebeests aren’t the only ones migrating. As Doug Saunders writes in his recent book Arrival Cities: The Final Migration and Our Next World, more than a third of the world has moved from village to city during the last century. And this is just the beginning of the massive shift of humans from the periphery to the core.

These migrants arrive and settle in the fringes of cities, creating illegal interconnected neighbourhoods that risk being bulldozed over at any moment. The dwellings form the structure of “arrival cities” which function as a network, entry mechanism, urban establishment platform and social mobility path for people who want a better life for themselves and their family.

Saunders ventures through these dwellings, describing them as “unstable buildings elevated on stilts over open cesspits separated by shadowy passageways less than a metre wide, crawling with livestock and untended children,” and spoken to people who see these transient cities as an opportunity of achieving upward mobility.

Their current state of poverty is temporary; as residents identify as “successful urbanites who happen to be passing through a period of poverty, perhaps for a generation.” From his discussions with the residents of the arrival cities he has learned that the value of a cell phone is equal to that of kerosene and that these shantytowns and their inhabitants are not to be overlooked or ignored as they will become the city’s future lower- and middle-class residents.

Canadian author Doug Saunders is also a journalist with the Globe and Mail. His travels and background as a reporter provide the reader with rich detail and a wealth of information about the people and places he comes into contact with. However, his love of detail can overwhelm in Arrival City. Biographical narratives intersect with lessons on urbanization patterns, studies in linguistics (as in the ever-changing meaning of the word “job”) and demographic statistics, bolstered by footnotes. This flood of information, while interesting and thorough, at times detracts from the personal anecdotes that initially capture the reader’s attention. Nevertheless, his book proves to dispel the myths surrounding arrival cities while advocating their recognition and their preservation by the cities that they surround.

Arrival Cities‘ thorough nature also adds merit to Saunders’ investigations. He often returns to places, such as the Tower Hamlets in London to interview second-generation immigrants a decade after first visiting them to see how they have fared. These re-interviews allow for the reader to learn of the fortunes of these people and their neighbourhood, which, unlike some European countries managed to produce a continuous cycle of incoming and outgoing Bangladeshi Britons. Like a machine, these people enter the neighbourhood and soon gain upward and outward mobility, moving away from high-risk, labour-intensive jobs to careers in finance, politics, education and government. Still tied to their roots, they manage to send remittances back to their village. Saunders’ claim of the benefits of arrival cities is fortified by his diligence to return and recall what and who has changed at most of the places that he visits.

Saunders attests cities that put together funding and resources to promote “density, spontaneity and diversity” in the form of land ownership and citizenships have witnessed greater integration and growth both socially and economically. Such cities have led to a decrease in population growth and the empowerment of women who are both educated and employed. They have, however, led to the loss of the support system that an extended family provides, as is missed by Malian-born Alima inArrival Cities. She now lives in France, yet is reminiscent of the times she was “surrounded by extended family members who can help.”

While North American cities were the destinations of the largest international migrations that facilitated upward mobility through land ownership, Saunders notes that not all cities have been successful, citing Paris as an example. Cities that do not allow for the residents of their arrival cities to gain ownership of their lands end up with immigrants that cannot grow and flourish into “something that contributes to the country’s economy and culture.” Because of their last names and neighbourhood, the second generation French-born “immigrants” as they are still considered, are both marginalized and isolated. In France, this led to the riots of 2005, where the children and grandchildren of villagers incinerated cars, an object that symbolized one’s “mobility and success.” Their fight was one for acceptance, which they demonstrated by holding up their French ID cards in protest. Saunders’ ability to examine both the positive and negative aspects of arrival cities is refreshing, and key to this book’s relevance.

What is the future of arrival cities? Doug Saunders title implies that this migration is the final one resulting in the permanent reduction of rural cities worldwide. He predicts that by the end of the century more than three quarters of the world will have become urban, which is beneficial for both the people and the environment. The idea of humanity heading towards a permanent equilibrium seems debatable.When the urban economy falls, as it did in 2008, most immigrants return back to their home villages, as was seen by Polish villagers in parts of Europe and villagers from cities in sub-Saharan Africa alike. Predicting a permanent stable population in a time of turmoil and chaos is like trying to outrun a herd of wildebeest, near impossible.