Corporate Knights and As You Sow have released our 7th Carbon Clean 200 list of publicly traded companies that are leading the way with solutions for the transition to a clean energy future.

Since our first report was launched in the summer of 2016 a great deal has changed in the world.

Larry Fink, the CEO of the largest investment firm in the world, shook up Wall Street this January stating that we are “on the edge of a fundamental reshaping of finance” with climate change as a defining feature, that “climate risk in investing risk…in the near future – and sooner than most anticipate – there will be a significant reallocation of capital.”

In between Fink’s letter, Greta Thunberg’s call for a radical change acceleration on the pace of climate action took over the agenda at Davos during the World Economic Forum, where a new manifesto proclaimed stakeholder capitalism and ESG define the new economy and Larry Fink was spotted wearing a rare-edition 2 degrees scarf around his neck.

Another inflection point in the popular culture realm occurred during halftime at Superbowl 2020, where the company that once “killed the electric car” purchased a prime advertising slot to showcase their new electric Hummer with LeBron James as the pitchman.

The fundamental story is that march from high carbon energy to clean energy is only quickening driven mainly by economics, risk, and increasingly supported by other social forces from Greta to Pope Francis; from Extinction Rebellion to The European Central Bank.

Investors have awoken to this trend, which helps to account for the anomalous direction of oil prices and oil stock values in 2019. Brent Crude Oil prices rose 28% and WTI oil prices rose 30% last year, while the energy sector placed dead last in the Standard & Poor’s 500 index, posting a 7.3% gain, while the index as a whole rose 29% for the year.

As the outgoing governor of the Bank of England, Mark Carney, puts it, “Companies that don’t adapt [to the low-carbon economy] – including companies in the financial system – will go bankrupt without question. [But] there will be great fortunes made along this path aligned with what society wants.”

Carbon-intensive companies are suffering because the alternatives are not just cleaner but cheaper. Around two-thirds of the world’s population now live in countries in which wind or solar are the lowest-cost ways of generating power. Renewables are now cheaper than coal in two-thirds of the world’s countries, according to Bloomberg New Energy Finance. BNP Paribas estimates that oil needs to come down to US$10 a barrel to be competitive with electricity-driven transport. This does not mean fossil fuels are going away tomorrow, but it does kill the growth story and leads to questions about demand assumptions on big oil’s economic forecast. For oil investors, the market’s realization of this inevitable decline could make the coal horror show look like Mary Poppins.

This increasing speed of the energy transition is part of the reason why investors representing US$12 trillion in assets have made public their divestment from fossil fuels.

Perhaps more telling is that beyond these public declarations, many of the biggest investors in the world are selling off their fossil fuel holdings and loading up on green assets. For example, without any fanfare the C$200 billion Ontario Teachers’ Pension Plan has dialed down its fossil-fuel equity holdings to just 1%. On the upside, the C$306 billion Caisse de dépôt et placement du Québec (CDPQ) has grown its green investment book to C$30 billion, earning commercial returns along the way, according to outgoing chief executive Michael Sabia.

While economics are shifting in favor of clean energy investing, so is public sentiment. Call it the Greta effect if you like, but most people are no longer comfortable with the idea that their retirement investments may be helping to set the world on fire and we are seeing this especially in millennials and women.

With all this action, we hope that the Clean200 can to do two things:

Efficient market theorists caution that if you add any non-financial considerations to portfolio selection, you are at a financial disadvantage. The trouble with this theory is that investing in a time of transition is like hitting a curveball. Putting on a clean energy lens gives the batter a better sense of the ball’s trajectory and increases the chance of making solid contact.

While we’re not promising any home runs, we are happy to report that the Clean200 now has more than a three-year track record of outperforming its high-carbon global counterparts.

Since inception (July 1, 2016), the Clean200 has generally been ahead of the MSCI ACWI Energy Index. 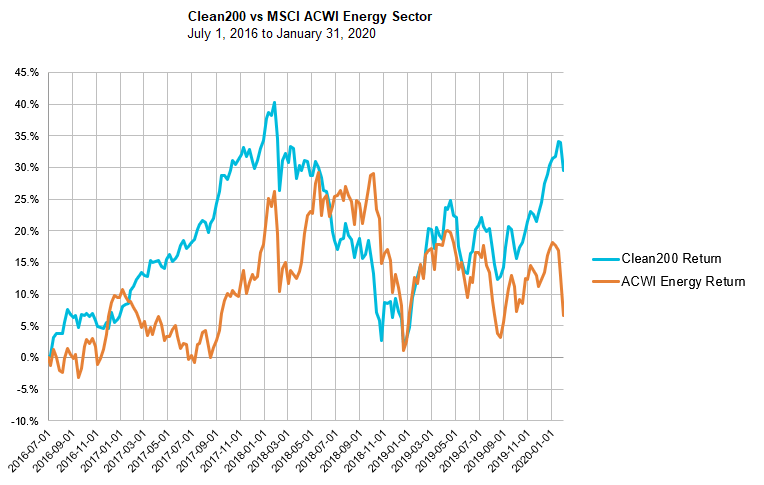 Overall, the model presented in the form of the Clean200 continues to indicate that demand and market forces are driving growth for low carbon companies. Since its inception two and a half years ago, the Clean200 has generally outperformed the MSCI ACWI Energy Index. It will be interesting to see how the trends unfold over the next few months.

For full results, including last year’s Clean 200 companies that didn’t make the cut this year, this year’s new entrants and companies excluded from our 2020 list, click here:

The Clean200 are the largest 200 public companies ranked by green energy revenues. It was first calculated on July 1, 2016 and publicly released on August 15, 2016 by Corporate Knights and As You Sow. The current list has been updated with data through the end of 2019 (December 31, 2019).

The Clean200 companies are listed by their estimated green revenues in USD. The dataset is developed by multiplying a company’s most recent year-end revenues by its clean revenue estimate, primarily sourced from Corporate Knights Research. In order to be eligible, a company must have USD revenue of at least $1 billion (most recent available fiscal year end data) and earn more than 10% of total revenues from clean sources.

The Clean200 uses negative screens. It excludes all oil and gas companies and utilities that generate less than 50 percent of their power from green sources, the top 100 coal companies measured by reserves, the top 100 oil & gas companies as measured by reserves, as well as all fossil fuel companies, majority fossil-fired utilities, pipeline and oil field services companies, and other fossil fuel-related companies screened on As You Sow’s Fossil Free Funds. In addition, the Clean200 excludes weapons companies including major military arms manufacturers found on the SIPRI Top 100 arms-producing and military services list, as well cluster munitions, nuclear weapons, and civilian firearm manufacturers screened on As You Sow’s Weapon Free Funds. The Clean200 also excludes palm oil, paper/pulp, rubber, timber, beef, and soy producers that are screened on As You Sow’s Deforestation Free Funds, companies using child or forced labor, and companies who engage in negative climate lobbying are not included. The full list of exclusionary screens is provided below.