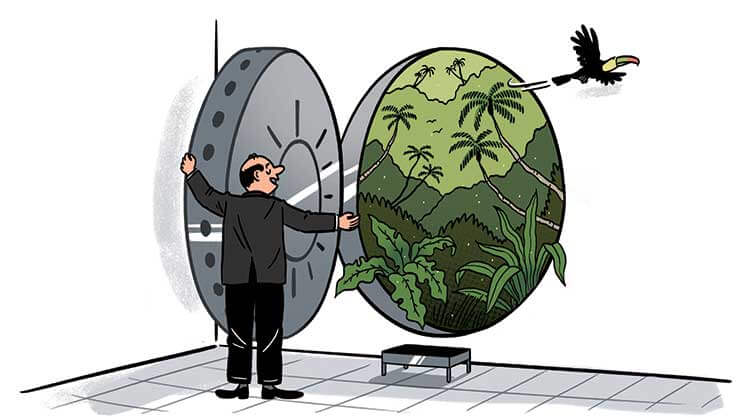 The fossil fuel divestment movement argues that where we invest our money either helps move toward a cleaner future or props up polluting industries that are driving climate change.

Now government agencies are taking that idea to the next level by proactively encouraging investment in renewable energy and energy-efficiency projects. Called green banks, they are not banks as we typically think of them. They do not accept deposits from individuals, and they aren’t private institutions. Instead, green banks are government run and aim to leverage limited public funds by attracting private capital to these projects.

They “are really more like public financing authorities, pulling in as much private finance as possible,” says Rob Youngs, program director for the Coalition for Green Capital, a Washington, D.C.-based nonprofit that works to establish green banks. “Generally they’re capitalized with public dollars from a variety of sources: taxes, cap-and-trade revenue, a rider on utility bills.” But they have greater reach than typical government subsidies, says Youngs, which are spent and then depleted. Because green banks are using government money primarily to make loans, rather than grants, the money is effectively recycled when loans are repaid, he said.

By offering financing or reducing the cost of financing, green banks can attract private investment to clean energy, sometimes achieving a 10:1 ratio of private-to-public dollars, Youngs said. This leverage is critical because, although the world invested a record US$286 billion in renewable energy in 2015, that investment must be doubled by 2020 and tripled in the 2020s to meet international objectives laid out in the 2015 Paris agreement, according to a recent report by the International Renewable Energy Agency. The lion’s share of that investment must come from the private sector, the report concluded.

Green banks are a growing global movement. At the Paris COP21 talks in December 2015, the Green Bank Network made its worldwide debut. Youngs’ Coalition for Green Capital was behind it, along with the Natural Resource Defense Council and early examples of these public financing authorities, including Connecticut Green Bank, New York’s NY Green Bank, UK Green Investment Bank, Australia’s Clean Energy Finance Corporation, the Japan Green Fund and Malaysia’s Green Technology Financing Scheme. The goal of the new organization is to share best practices for clean energy financing, sort of an “open source banking” model.

It will amplify internationally the work begun at the Coalition for Green Capital, which has been involved with legislative proposals for a U.S. national green bank in 2009, 2014 and, most recently, July of this year. The latest House of Representatives bill, the United States Green Bank Act of 2016, would create a national green bank to fund state green banks. While this attempt may again fail to become law, “I think it is important to keep the conversation going,” said Youngs.

These new financing authorities can be seen as a continuation of an earlier movement, confusingly also called green banking. It dates back to at least 1980 with the founding of Triodos Bank in the Netherlands. Unlike the government financing authorities, these earlier green banks are actually banks: private institutions where individual people can have chequing and savings accounts. What sets them apart from traditional banks is that they only make loans to companies and individuals that meet charter values, such as environmental sustainability or strengthening the local community. They include at least 10 banks in the United States and Canada, including Vancity in Vancouver and New Resource Bank in San Francisco.

The 2008 financial crisis spurred three early green banks, including Triodos Bank, ShoreBank in Chicago and Brac Bank in Bangladesh, to form the Global Alliance for Banking on Values (GABV) to promote their banking model. “They thought, ‘Wow, if all the other banks had banked the way we do, we probably wouldn’t have had a financial crisis,’” said Marc Eguiguren, secretary director of the alliance. “It’s time for us to raise our voice and tell the world there’s a different way.”

That way, according to Eguiguren, is centred on key principles, including transparency; a triple-bottom-line approach that values people, planet and profit; attentive monitoring to avoid being sucked into banking industry disruptions like the 2008 crash; and “only financing the real economy,” he said, meaning no derivatives, hedge funds or other money machinations.

Based in the Netherlands, the GABV now includes 36 financial institutions operating in countries on all six populated continents. They serve 25 million customers, hold US$110 billion in combined assets and employ 42,000 people.

For example, despite a rapid fall in the cost of wind and solar technology over the last several years, up-front costs still tend to be higher than conventional options because “weak environmental policies fail to sufficiently price pollution,” said Youngs. Private investors also tend to be less familiar with renewable options and lack reliable information about them.

These factors add up to perceived risk, which often translates into higher interest rates for up-front capital investments.

The new green banks provide project information to potential investors and use various financial tools to mitigate risk. These include putting up extra collateral for a loan, becoming cornerstone investors by committing to buy a defined block of stock, or aggregating a number of small projects together in a single investment to make it more attractive to private investors. “Because of the cost of underwriting, it would be expensive to underwrite a bunch of $500,000 projects,” said Youngs. “But if the project is $50 million, it’s more attractive.”

By reducing risk, green banks can help renewable energy projects get low-interest financing, thus reducing the up-front cost. Green banks are able to go where traditional banks fear to tread because “money from the government is not beholden to the fiduciary requirements of private investors,” said Youngs. “They can go into an area where there’s little track record.”

In Canada, Ontario’s Ministry of the Environment and Climate Change is working to create a green bank funded by the province’s cap-and-trade program, part of its Climate Change Action Plan. Details are being ironed out in preparation for its 2017 rollout, said Gary Wheeler, spokesperson for the ministry. Because emissions from buildings make up 24 per cent of Ontario’s greenhouse gas pollution, the bank will invest in energy-efficiency projects for buildings, according to the action plan. These include replacing gas boilers, electric baseboard heaters and oil furnaces with solar panels, air-source heat pumps, geothermal systems, vehicle-to-grid energy systems and energy storage systems.

The bank plans to provide grants or other incentives to homeowners for energy-efficient home improvements and may, in some circumstances, provide or help secure financing, said Wheeler. The bank will also make financing affordable for commercial and industrial projects, primarily by aggregating projects to reduce risk. Cap-and-trade revenues will provide the bank’s capital, which the ministry estimates will be funded at C$1.8 billion to $2.3 billion, or approximately 25 per cent of the total estimated value of the cap-and-trade market, said Wheeler.

Ontario’s bank will join growing ranks around the world. In addition to the six that founded Green Bank Network, Switzerland now has a green bank, as well as Hawaii, California, Rhode Island, New Jersey, Montgomery County in Maryland and Masdar City in the United Arab Emirates.

That momentum is likely due to the fact that the public financing authority model resonates with political animals of various stripes, said Youngs. “They have components that a lot of people can get behind, like efficient government, lowering energy costs for consumers, and increasing the amount of private sector activity in renewable energy.”