While commuter traffic may have slowed dramatically through the first year of the pandemic, one group of motorists was clocking more miles than usual: delivery drivers. Between May 2019 and May 2020, Canadian online retail sales more than doubled, according to Statistics Canada. That surge in e-commerce has meant a spike in last-mile deliveries – the final stage of order fulfillment between our purchased items leaving local distribution hubs and arriving at our front doors.

While ramping up sales of electric passenger vehicles is important and inevitable, last-mile freight delivery offers the lowest-hanging fruit for rapid reduction of carbon emissions. As of today, Natural Resources Canada data show that transportation-related emissions account for 20% of all Canada’s emissions, and freight-related sources represent 42% of that. A 2020 World Economic Forum report predicted that growing demand for e-commerce could bring 36% more delivery vehicles into inner cities by 2030 and increase traffic congestion and emissions by more than 30% in the world’s top 100 cities – problems exacerbated by increased demand for same-day delivery, which more often sees half-empty trucks making rounds. If nothing is done to change the course, the Calgary-headquartered Pembina Institute warns, emissions from last-mile freight delivery will outpace those of passenger vehicles by the end of the decade.

Meanwhile, Canada has committed to reducing its greenhouse gas emissions by 40% to 45% below 2005 levels by 2030 and to being net-zero by 2050. Reversing the emissions trajectory of last-mile deliveries is key to keeping Canada and the world on track for meeting emissions targets.

The first step is targeted investment. The federal government’s spring budget announced funding for a number of measures that would help accelerate the EV transition, including $56 million over five years to implement standards for ZEV (zero-emission vehicle) charging and fuelling stations. There’s also $46 million allocated to advancing Canada’s critical battery mineral supply chain and a tax break of 50% for corporations and small businesses that manufacture zero-emission technologies.

There’s less in the way of funding for individual businesses looking to convert their fleets. The federal Incentives for Zero-Emission Vehicles (iZEV) program allows businesses to write off 100% of the purchase costs of eligible zero-emission passenger vehicles up to $55,000. Quebec offers businesses the same incentive as consumers, meaning that zero-emission vehicles with sticker prices of $60,000 or less qualify for a rebate of $8,000. British Columbia’s fleet program is the most robust in Canada: companies can recoup up to one-third of the purchase price of medium- and heavy-duty zero-emission vehicles, or two-thirds for tourism and hospitality businesses, up to a cap of $100,000 per vehicle through the Specialty Use Vehicle Incentive.

Governments can also lead by example. American President Joe Biden announced in January that the U.S. government’s 650,000-unit fleet (most of which are postal vehicles), will be replaced with electric models. To date no similar commitment has been made by the Government of Canada.

Each of the Detroit Three automakers has committed at least $1 billion to retool vehicle assembly plants in Southern Ontario to EV production. The most pertinent development for fleet operators is General Motors’ commitment to convert its CAMI assembly facility in Ingersoll, Ontario, to produce battery electric delivery vehicles, making it the first large-scale production plant in Canada to do so.

FedEx Express has signed on to be the first customer for BrightDrop, the GM subsidiary with products to be assembled at CAMI in Ingersoll. The first of an undisclosed number of FedEx BrightDrop vehicles are expected to be operational by the end of 2021. The entire FedEx parcel pick-up and delivery fleet will be zero-emission by 2040, with 50% of all new vehicle purchases to be electric by 2025 and 100% by 2030.

Ford Canada announced in May that more than 450 commercial customers have stated intentions to purchase its Ford E-Transit, which benefits from battery development shared with the Mustang Mach-E BEV.

“A leadership position would require committing to an all-electric fleet by 2030 or soon thereafter. They would have to be all-electric starting now.”

According to a December 2020 study by Canadian fleet-tracking firm Geotab, nearly two-thirds of North American fleets would reduce their operating costs by swapping to EVs today. As with passenger vehicles, the up-front purchase cost of a battery electric delivery vehicle is higher, but the reduced operational costs lead to a break-even point after which the cost of running the EV is demonstrably lower over time.

Lion Electric, a medium- and heavy-duty EV manufacturer based in Saint-Jérôme, Quebec, offers battery electric Class 6 cargo, Class 8 cargo, Class 8 refuse and Class C, D and A school bus products. Although up-front costs for vehicles and charging stations can vary depending on the size of the fleet and existing infrastructure, the benefits already outweigh the drawbacks in today’s economics, and the situation only stands to improve, says Gary Lalonde, vice-president of truck sales for Lion Electric. 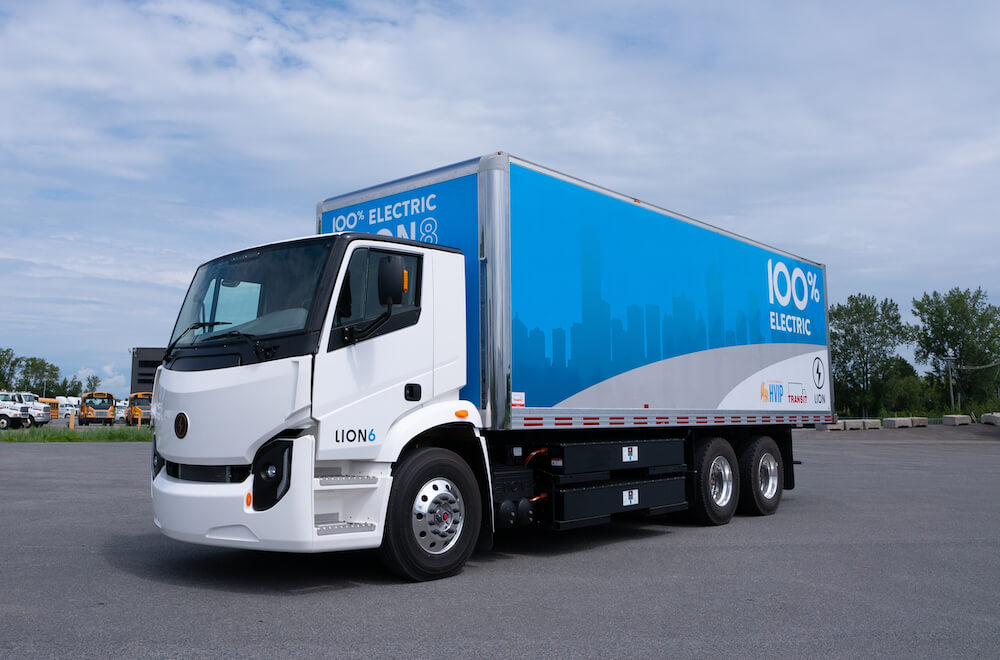 Lalonde says that fleet operators can expect to spend 80% to 90% less on electricity than on diesel fuel, depending on their location within Canada. Electric motors are also more reliable and require less upkeep, which he says means EVs have reduced maintenance costs thanks to the lack of oil changes, diesel exhaust fluid costs and overall downtime (time that trucks are not out doing deliveries because they’re having maintenance performed on them).

In comparing a Lion6 to a diesel-powered Class 6 truck, Lion Electric data shows a current total cost of ownership for the Lion6 that is 18% lower and begins to pay back over 7.7 years of ownership, while cost projections for 2024 see those figures improve to 41% and 3.3 years, respectively, as prices come down. This is based on an estimated useful life for each truck of 10 years, 52,000 miles driven annually and fuel consumption figures of 1.18 kWh per mile and maintenance costs of $0.16 for the Lion6 versus 7 miles per gallon, $0.40 per mile in the diesel equivalent.

Amazon, which is expected to account for 40% of the U.S.’s e-commerce sales by year-end, has contracted to receive 2,500 of Lion’s battery electric trucks by 2030. This is in addition to the 100,000 Rivian battery-electric delivery vans Amazon will receive beginning in 2021, most of which will be on the road by 2024. The shift to ZEVs is part of Amazon’s broader commitment to being carbon-neutral by 2040.

IKEA Canada is, indirectly, a Lion Electric customer. The home furnishing retailer has partnered with last-mile delivery provider Second Closet, which has ordered 15 Lion6 trucks. IKEA Canada announced in April its commitment to fulfilling 100% of its deliveries with zero emissions by 2025.

Purolator currently operates 323 hybrid-electric vehicles and has committed $1 billion toward reaching net-zero by 2050. The company says that residential deliveries have increased 50% during the pandemic and that it is piloting zero-emission low-speed electric delivery trucks and electric cargo bikes in Toronto and Montreal to help green last-mile deliveries. Those electric delivery vehicles are based on Ford’s F-59 platform and electrified by Motiv Power Systems.

This deployment marks California-based Motiv’s first collaboration with a company in Canada.

Ralph Torrie, director of research at Corporate Knights, says the time is now to convert all corporate fleets to zero-emission vehicles. “A company that is claiming it will have an all-electric fleet by 2050 is saying that they will be followers, not leaders, in the transition. A leadership position would require committing to being all-electric by 2030 or soon thereafter. To be nearly all-electric in 2030, they would have to be buying all-electric starting now.”

He adds that a commitment to electrifying sooner than later has another critical advantage: “It hedges against the real possibility that fossil fuel vehicles purchased now will indeed be stranded assets before they are fully depreciated, because of rising carbon prices that render their continued operation more expensive than their replacement with EVs.”

As more companies look at reducing emissions by converting their delivery fleets to electric, the lineup of product offerings is expanding in lockstep. For last-mile deliveries and all other vehicles, Torrie says, EVs are a clear winner: “It’s a bit like comparing a car to a horse.”

Stephanie Wallcraft is a multiple-award-winning automotive journalist based in Toronto and is the president of the Automobile Journalists Association of Canada.