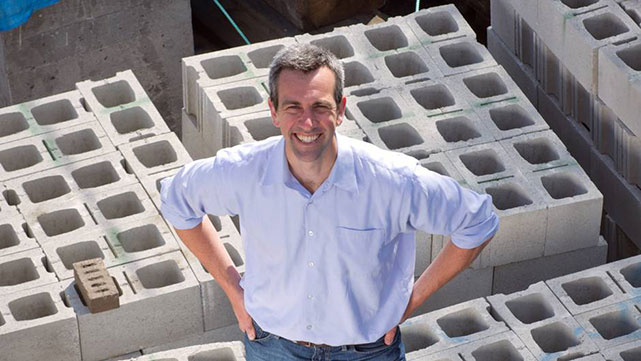 CarbonCure Technologies retrofits concrete production systems with its technology to inject waste CO2 into the process to replace some of the cement with CO2.

A roomful of materials scientists, gathered at UCLA for a recent conference on “grand challenges in construction materials,” slowly passed a brick-size white block around the room. They held in their hands, briefly, part of the solution to one of those grand challenges. The white block, rock solid and surprisingly lightweight, was a new alternative to cement, the glue that holds together aggregate, or crushed rock, to make the world’s most ubiquitous building material: concrete.

Production of cement — and by extension, concrete — has a large environmental footprint, mostly due to the huge amount of energy it takes to heat limestone, cement’s key ingredient, and the subsequent chemical process it undergoes. The process of creating cement emits upwards of 80 per cent of the cement’s weight in carbon dioxide and accounts for about 5 per cent of human-generated CO2 emissions annually. Though the white block’s production still requires some of the CO2-emitting fuel use of typical cement making, CO2 is also one of the ingredients used to create it. About one-third CO2 by mass, the cementlike substance reduces its carbon footprint by sequestering CO2inside the finished product.

Concrete, and the cement that binds it, is the most widely used material in the world, and its usage is on the rise. From 2011 through 2013, China used more than 6.5 billion metric tons (7.2 billion tons) of cement — more than the U.S. used in the entire 20th century. Between 2006 and 2050, global production of cement is expected to increase to between 3.7 billion metric tons (4.1 billion tons) and about 4.4 billion metric tons (4.9 billion tons) a year. Since concrete’s not going away, reducing the carbon intensity of its production is becoming a global imperative. New technologies and approaches are being developed to cut down on concrete’s environmental downsides — everything from utilizing industrial by-products to reduce cement usage, to recycling existing concrete, to producing self-healing concretes that reduce the need for new concrete, to creating entirely new materials.

But no perfect solution exists. That yet-unnamed white block is not completely carbon-negative nor can it replace typical cement completely, explains Fredrik P. Glasser, a professor at the University of Aberdeen in Scotland who is part of the team that developed the cement alternative. In this case limestone is replaced with waste CO2 and magnesium from a cement production facility and a desalination plant in Qatar, but carbon-emitting high heats are still required. Glasser says it’s less about replacing cement than reusing the large quantities of CO2 it produces. “The emphasis has to be on taking that CO2 and making useful products from it,” he says. The material he’s helping develop is still a few years away from market, but it’s proving in tests to be a viable replacement for some concrete and insulation in building projects. His goal isn’t to compete with cement, but to “eat away at the edges” of what it’s currently being used for, shaving down the global need for cement and the carbon emissions it produces.

Researchers and businesses all over the world are trying to find other ways to carve niches into this market — by developing novel material approaches or simply making concrete less environmentally harmful.

The Canadian company CarbonCure Technologies has developed a process that injects waste CO2 into a typical concrete production process, effectively replacing a small amount of cement with CO2 without compromising the concrete’s strength or integrity. Once in the mix, the CO2 changes into calcium carbonate, the chemical equivalent of the limestone used in the production of conventional cement. Four concrete producers in North America have started using CarbonCure’s technology, including Argos in Atlanta and Vulcan in Springfield, Virginia, and about a dozen more are negotiating licenses, according to Sean Monkman, the company’s vice president of technology development. One user, over the course of a single week after the technology was installed, saw its CO2 emissions drop from 124.5 metric tons (137 tons) to 119 metric tons (131 tons) by replacing some of the carbon-intensive cement in the concrete mix with waste CO2, Monkman says.

CarbonCure’s technology is a small retrofit to the concrete production process — just a computer system, a tank of waste CO2 and a tube that can pump that CO2 into the concrete mix. “It’s simple. It doesn’t require any huge change in the way things are normally operated,” Monkman says. “For a conservative industry like concrete, it’s got to be simple if people are going to want to do it.”

Change is slow, many in the industry concede, which has made it challenging for new material approaches to catch on. And though typical cement has a high carbon footprint, there’s still no cheaper option.

Yet another way to reduce the carbon footprint of concrete is to recycle it. Researchers at the University of Notre Dame are developing a cost-effective method by which producers of precast concrete — concrete formed into a mold and brought to building sites — can effectively recycle their waste concrete into aggregate and reuse it in the production of construction beams. Engineering professor Yahya Kurama, who’s leading this research, says the environmental toll of mining the aggregate used to make concrete — often from riverbeds and mountaintops — has been largely ignored. “You’re not only destroying the environment but you’re spending the energy to dig that material out, and then you have to transport it,” he says. By reducing the amount of virgin aggregate they mine, concrete companies can cut both environmental impacts and costs.

Another approach to reducing the need for new concrete is the advent of self-healing concrete — concrete mixes augmented with various polymers, bacteria and healing agents that can automatically respond to cracks. Researchers in the United Kingdom are currently testing out a number of experimental self-healing concretes, including one embedded with tiny capsules that open when the concrete cracks and form new solid calcium carbonate.

None of these approaches on its own will erase the environmental impact of concrete. But the more alternatives there are, the more sustainable the industry can be.