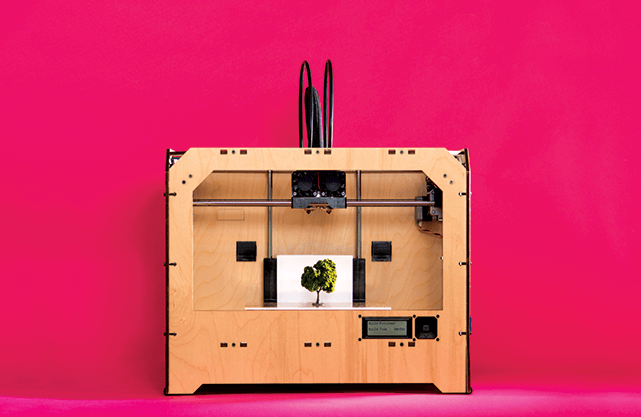 Tyler McNaney didn’t get into 3D printing for the usual reasons. Rather than creating things out of seemingly nothing, he was motivated more by the idea of transforming existing items into something new.

To that end, McNaney designed the Filabot, a breadbox-sized machine that melts existing plastic waste into the filament used by 3D printers. In that way, today’s water bottle can be recycled into the printing “ink” that forms tomorrow’s iPhone case.

In late 2011, the Vermont Technical College student launched a crowdfunding campaign on Kickstarter with the goal of raising $10,000. A month later, he closed at more than triple his goal. The funding allowed him to further develop his invention, which can now process a variety of thermoplastics, including nylon.

McNaney, a self-described altruist, plans to start selling the Filabot this year. He priced it at $350 during the campaign and hopes to keep it at that level so it can reach a wide range of users, particularly in the developing world.

People in developing countries have plastic all around them, he says. “If they could use 3D printing as a means to make something as simple as a fork, that would be amazing.”

McNaney’s creation looks to solve two of the biggest current issues with 3D printing. At around $40 per one-kilogram spool, the plastic filament used in many home devices is still too expensive for the mainstream. The Filabot can eliminate that cost and get rid of the waste produced by printing test objects, since those items can simply be recycled into more filament.

3D printers themselves have been around for more than 20 years, but they’ve also been expensive and therefore used strictly by industry. Rapidly improving technology and falling prices in recent years, however, have brought them within reach of small businesses and individuals, with desktop models now available for less than $1,000. And while plastic has generally been used for output, recent strides have been made in printing metal and even edible goods. The replicators seen on Star Trek, with which Captain Jean-Luc Picard could instantly order up a cup of tea, don’t seem so fantastical anymore.

The worldwide market for 3D printing is thus expected to double to more than $6 billion by 2019. Not surprisingly, hype is at a fever pitch. Over the past year, the media has mused on everything from how the technology might be used to pull manufacturing back to North America to the creation of a moon base.

Lost amid all the noise, however, is the question of whether 3D printing is even economic – and environmentally sustainable – in the first place. Like all technologies, it holds much promise, but is there any peril?

On the plus side, 3D printing could significantly lower carbon emissions. If it does indeed lead to manufacturing repatriation, the environmental savings on shipping goods across long distances will likely be huge. Additive manufacturing, where an object is created by adding material to it rather than by machining excess away as in traditional manufacturing, also produces much less waste by its very nature.

Conversely, it still takes energy to produce the printing materials and convert them into objects. There’s also the question of what happens to printed items when they’ve outlived their usefulness. If the materials are toxic, they could be expensive to dispose of.

Manufacturing experts say it’s hard to determine whether 3D printing is economically and environmentally desirable because this sort of research hasn’t been done yet.

“It very well may be the greatest thing for the environment since beer in a can or sliced bread,” says David Dornfeld, professor of mechanical engineering at the University of California, Berkeley. “But you have to think about the energy that comes in the door with every kilogram of metal or material that you’re using. We don’t yet have the numbers for that on the powders and extruded pastes used in additive manufacturing.”

Coming up with such data is a task Dornfeld has assigned to his students. One of the problems they’re encountering, however, is that the materials used in 3D printing – both large-scale industrial and individual-level home tinkering – have not yet matured, which means costs are still in flux.

On the economic front at least, studies are emerging. Some are showing that 3D printing is, contrary to conventional wisdom, more cost effective when it comes to creating complex objects rather than simple ones.

A study by Lawrence Livermore National Laboratory in California, for example, found the cost of making a single lead bullet through traditional manufacturing to be about a tenth of a cent. Using a direct ink write process cost considerably more, at 66 cents per bullet.

A comparatively complex knee implant, however, cost approximately $1,900 to make through traditional means, but only about $1,650 through additive manufacturing. That’s because 3D printing can make a single object with complicated dimensions, while traditional processes need to break it down into multiple parts. Complex additive manufacturing therefore stands to get even cheaper, which could indeed spur large-scale industrial adoption. But how will that affect the environmental cost of manufacturing?

Proponents believe the technology will have indirect environmental benefits on the consumer end. As more people learn about how things are made and perhaps even create them at home, they may end up buying fewer things. Combined with the sort of recycling promised by the Filabot, this could have a profound positive impact.

“When people become re-engaged with what they use in-house and spend their time with it, it’s going to take away from the consumerist culture a bit,” says Aaron Pratt, vice-president of marketing for 3D printer maker Afinia. “That’s going to be a bigger long-term impact than any gains from production.”

Still, the cost questions may be a big reason why large players have so far resisted getting into the technology. The likes of HP and Epson, both of whom declined to be interviewed for this article, hold patents in the area, but have not ventured forward publicly as of yet.

The legal and ethical questions may also be a disincentive. 3D printing could make the copyright battles over music and movie file-sharing look like a spring training warm-up, once the swapping of patented designs becomes widespread. The Pirate Bay – the infamous file-sharing repository – already has a “physibles” category.

The fights have already started, with U.K. toymaker Games Workshop last year sending a cease-and-desist letter to a man who created and shared his own Warhammer miniatures.

There’s also the possibility that 3D printers will be used to create guns and other weapons, with some tinkerers having already succeeded.

In both cases, the technology will likely force regulatory and legal reforms. Copyright and patent laws, which are already considered horrendously outdated, will need to be amended to reflect how people are actually using digital technology. 3D printing proponents also hope its potential negative uses don’t provoke irrational responses. After all, the Internet made it much easier to make weapons, too.

“Those who wish to do damage will do damage,” says Pratt. “I don’t know that there’s a way to stop it.”