Not too long ago, consumers with broken electronics – everything from smashed phones to cracked dishwashers – would turn to independent repair shops for help. That’s slowly becoming a thing of the past.

A new generation of devices that are purposely difficult to mend, either through design, legal copyright or encrypted software, are leaving frustrated consumers with fewer repair options. It’s a problem that’s costing them money and creating an ever-growing pile of e-waste, drawing the ire of environmentalists, repair advocates and activists.

Working under what is known as the “right-to-repair movement,” these advocates are fighting back against manufacturers they claim are greedily boosting their bottom line at the expense of their own customers. Their goal is to roll back restrictive repair policies, press tech companies to share their manuals more publicly and make it easy to access crucial service parts. In other words, they want to give consumers the ability to fix their own electronics without legal interference all while creating more, and hopefully cheaper, repair options.

The movement couldn’t have come at a better time. Canadian households are throwing out more and more e-waste every year, reaching 725,000 tonnes in 2014.

Forced to choose between trying to fix goods on their own or visit expensive manufacturer-endorsed repair centres, most are choosing to simply throw out their old devices and buy new ones. The toxic trash is rarely recycled and all too often ends up in landfills, leading to negative consequences for soil, water and air quality.

A recent study by United Nations University found the amount of global e-waste hit record highs of 41.8 million tonnes in 2014, with Canadians finishing 15th on the list of largest producers. Since then, the sum has continued to grow exponentially, according to industry watchers.

“We’re seeing more e-waste now because technology isn’t a nice-to-have like it was 20 years ago; it’s necessary so diverting [waste] from landfills is important for the future,” explains Lynda Kitamura, chief financial officer and vice-president of operations for the ‎Electronic Products Recycling Association (EPRA).

The program, which oversees recycling hubs in nine provinces, processes almost 17 million electronic devices every year. This e-waste, adding up to more than 110,000 tonnes, is still only a fraction of the total junk thrown out. “A number of these discarded electronics contain hazardous material, like mercury, that doesn’t break down,” says Kitamura. “It’s dangerous to the environment and that’s why it’s important to recycle or refurbish items at the end of their life.”

Of course, recycling isn’t a perfect solution. Even organizations like EPRA, which manages to reuse up to 90 per cent of donated devices, can’t find a use for every element found in old tech products. A growing number of companies are beginning to focus on “urban mining,” the practice of extracting valuable metals and materials from electronic waste. This nascent industry is set to grow in importance in the decades ahead, but the simplest way to reduce the heavy volumes of e-waste remains reducing the barriers to repair.

In the U.S., lobby groups are taking the fight for repair reformation to the public and court system in order to drum up support for their cause. Grassroots groups like The Repair Association are pairing up with hobbyists, law groups and more to not only recruit members but also motivate everyday consumers. So far it’s working, with more than a dozen U.S. states considering right-to-repair bills over the last year.

French lawmakers have taken a different approach, passing a landmark bill in 2015 that made illegal the practice of “planned obsolescence” – where a product is deliberately designed to have an artificially short lifespan. No companies have thus far been successfully prosecuted, but two new high-profile investigations were launched by French authorities earlier this year. 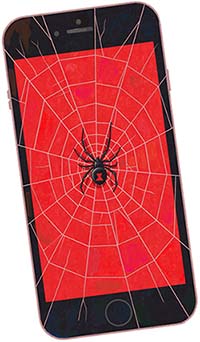 Supporters of right-to-repair in Canada haven’t been as successful as their U.S. counterparts, but recent events may finally help Canadians crack the repair monopoly. The movement is gaining steam thanks to the dubious actions of one of today’s biggest tech companies: Apple.

When it was revealed that Apple had begun intentionally slowing down batteries in old phones, ostensibly under the guise of improving efficiency, it ignited a firestorm online. The optics were not improved by the lack of transparency around the decision.

It’s not the first company to commit such a tech faux pas and it won’t be the last. However, the public fallout united both Canadian consumers and politicians who were eager to play a bigger part in a repair battle that has been brewing behind the scenes for years.

“It’s not like we haven’t had these conversations in Canada before,” says NDP politician Brian Masse. The Windsor West MP first started a very public debate over right-to-repair back in 2008 when he introduced private member’s bill C-273. The legislation was designed to give independent car garages access to specialized software data that, up until then, automakers kept under lock and key.

“It became absurd the barriers consumers faced,” Masse explains. “You had situations where cars that needed to be fixed couldn’t [be]. They were on the road longer because carmakers wouldn’t share simple software with independent garages,” he says, emphasizing that new-age machinery has changed the repair industry for good. “Fixing cars or technology products in general is more than just nuts and bolts now.”

His efforts were somewhat successful when then federal industry minister Tony Clement pushed ahead with a voluntary agreement that allowed auto companies to opt out of sharing data in certain conditions.

Masse is hoping to make a difference once again with a newly-tabled digital rights bill that, among many other things, advocates for better repair rights.

“It’s not just about Apple but all companies that change your device without your consent or prevent you from finding other repair options because they claim their proprietary technology can’t be shared,” he says.

He isn’t sure if his legislation will succeed but remains committed to the issue because whether or not people want to accept it, ever-tightening repair rules will one day impact everyone. “It’s not just consumer rights, but public safety and the environment that is affected. Everything is somehow touched by technology and the general public deserves to have a choice.”

In the absence of federal laws, a variety of tech forums are being established. International repair site iFixit is one of the many that have stepped in to serve desperate consumers around the world.

The company, which launched a Toronto store last year, sees 100 million people visit its site every year looking for diagnostic advice. As such, it operates in a somewhat legally grey area by providing user-generated tips and kits that help consumers repair their devices.

“So much waste is shipped overseas or dropped here [in the U.S.] because manufacturers won’t share critical repair documentation,” says Kelsea Weber, the company’s outreach coordinator. “If we can get more people to fix their own electronics, we can make an impact.”

In fact, even when companies offer complimentary parts or services a la Apple, people still “fall through the cracks,” Weber explains. People living in rural areas where repair centres aren’t available or consumers who can’t afford to live without their devices like smart stoves are at a severe disadvantage, he says.

Before getting too excited, however, it’s worth noting that consumers conducting repairs themselves often risk voiding any warranty covering the device in question.

Corynne McSherry, legal director for the Electronic Frontier Foundation, a world-leading digital rights group, views today’s right-to-repair movement as just the beginning of what’s to come. Repair rights is a complex pain point that has become easier to talk about but will take more time to permanently solve, she argues.

This issue is particularly pressing in light of the Internet of Things that is seeing more everyday tech relying on proprietary software or copyrighted technology. “No one should have to be a lawyer just to buy a refrigerator,” says McSherry. “There’s a lot of software today that makes our devices smarter but the cost of that is that it’s turning consumers into renters and not owners that don’t have a say over their own electronics.”

In the meantime, she suggests consumers make sure they read the fine print in their documents and seek out experts and groups to learn more about how they can help make a difference.

“I see [the right-to-repair movement] becoming more commonplace and you’re gonna see this momentum because people are going to be more aware of the limits they have,” says McSherry. “But it will take a combined effort.”