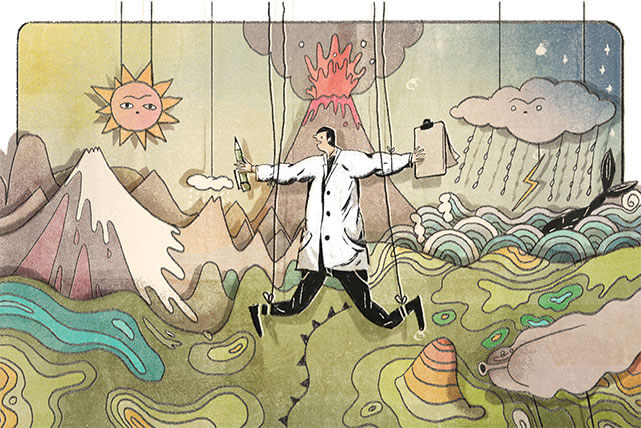 In 2004, science historian Naomi Oreskes published a short paper in the journal Science concluding there was an overwhelming consensus in the scientific literature that global warming was caused by humans.

After the paper’s release, there was some unexpectedly hostile reaction. This prompted Oreskes and her colleague Erik Conway to go even deeper with their research, leading to the publication of the book Merchants of Doubt. It documents how a small group of scientists with links to industry were able to sow doubt about the scientific consensus and delay effective policy on DDT, tobacco, acid rain and, now, global warming.

Fast forward to two years ago: a team of volunteer researchers (myself included) associated with the website Skeptical Science decide to update and extend Oreskes’ research. Led by University of Queensland researcher John Cook, we analyzed the abstracts of about 12,000 scientific papers extracted from a large database of articles, using the search terms “global warming” and “global climate change.” The articles had been published over a 21-year period, from 1991 to 2011.

As an independent check on our results, we also sent emails to the more than 8,500 scientist authors of these articles. (These were the scientists whose e-mail addresses we were able to track down). We asked them to rate their own papers for endorsement or rejection of man-made global warming.

Both approaches yielded a very similar result: 97 per cent of the scientific literature that expresses an opinion on climate change endorses the expert consensus view that it is man-made. The results were published in May 2013 in the journal Environmental Research Letters.

We were astonished by the positive reception. Mention of the paper was tweeted by U.S. President Barack Obama, Al Gore and Elon Musk, among others. Obama later referenced it in a speech at the University of Queensland, while U.S. Secretary of State John Kerry has referred to the 97 per cent consensus in recent speeches. John Oliver based an episode of his HBO comedy show Last Week Tonight around it, a clip viewed online more than five million times.

The paper has been also been downloaded over 300,000 times – so far – which makes it a blockbuster for a science paper.

Tol fails to make the case

We knew that our paper would be unpopular among climate contrarians, but we were taken aback by the ferocity of the attack and the obsessiveness of some of our critics.

One of the most persistent among them is Professor Richard Tol, an econometrician who teaches at the University of Sussex. Over the past two years, Tol has published numerous blog articles, written letters and submitted Freedom of Information requests to lead author John Cook’s employer, the University of Queensland. Tol has also petitioned the publisher of the article, the Institute of Physics, to have the paper withdrawn.

Expert reviewers at the journal Environmental Research Letters rejected the rebuttal that Tol submitted. After shopping his rebuttal around to other journals, Tol found one, Energy Policy, which agreed to publish his comment. The journal gave us the right to reply, but we didn’t have enough space to do so and we needed a supplementary publication to fully detail the many errors in his analysis.

Tol is no stranger to controversy. He had a vicious public dispute with economist Frank Ackerman, in the course of which he badgered Ackerman’s employer and tried to get Ackerman fired. Eventually, a group of eminent economists published an extraordinary open letter where they upbraided Tol for his unprofessional conduct.

He also wrote a series of letters to the Stockholm Environmental Institute (SEI), which was first to publish the article co-authored by Ackerman. The SEI issued a public statement, which supported Ackerman. “Professor Tol’s repeated, groundless attacks on this article, and on SEI for its association with the article, have violated the norms of civility and scholarly debate,” it said. “We urge Professor Tol to stop attacking the motivations and reputations of others, and to return to the academic community that accepts disagreement and engages in substantive debate.”

More recently, Tol has had some bitter exchanges with Bob Ward, of the London School of Economics, who had pointed out that one of Tol’s published papers contained serious errors. The errors were eventually formally corrected in the original journal (the correction was itself later corrected) and the IPCC had to change its report that had referenced Tol’s paper. The corrections related to a claim by Tol that small amounts of global warming have a beneficial effect, a false result that has been widely promoted by climate contrarians.

What is astonishing about Tol’s campaign is that he does not himself deny the physical science of global warming and also admits that the percentage consensus on man-made climate change is in the high nineties. His criticism consists of a long list of trivial and tendentious comments on methodology, the consequences of which he concedes—either explicitly or by default—have no significant impact on the outcome.

It came as no surprise to anyone working in climate research that there is an overwhelming scientific consensus on human-caused global warming. Our result was consistent with the outcomes of earlier studies that had measured scientific agreement by other means.

There are many areas in climate science that are not settled and that need more research. But mainstream scientists don’t waste their time arguing about whether or not humans are causing climate change. Increasingly, as we found, many scientists no longer even mention the human cause of modern climate change in their papers. It is taken for granted as are, for example, natural selection in the life sciences and plate tectonics in geology.

However, surveys show that the general public is misinformed about the degree of scientific agreement on global warming. People who do not accept human-caused climate change generally believe that a large fraction of scientists disagree with the basic notion of man-made warming. But even among people who accept the scientific consensus, there’s a false belief that there is significant disagreement among the experts.

Some of this difference of opinion can be explained by politics and culture, with conservatives tending to favour a low estimate of the perceived consensus and liberals a higher one. But there remains a gap – independent of politics – between how much the public thinks scientists agree on the fundamentals of climate change and what the actual level of agreement is.

We call this the “consensus gap” and it is that misunderstanding we are trying to correct. Part of that gap is due to people simply not being sufficiently informed, but part of it is because they have been actively misinformed by those seeking to oppose or delay public policy.

Recent social-science research has shown that the acceptance of the existence of the expert consensus on climate change is a gateway belief. If somebody is not aware, or refuses to accept that there is an overwhelming majority of experts who agree that humans have caused global warming, you are unlikely to be able to persuade them about the more uncertain future consequences of climate change. And you certainly won’t be able to persuade them to support policies to reduce emissions.

Convincing people that the experts agree on the fundamentals of the science is not, of course, sufficient to solve the climate problem, but it is a necessary step.

Tol is not the only one who has tried and failed to show our results are flawed. Climate contrarians everywhere protest there is no scientific consensus. If that were true, they should easily be able to show there is indeed a significant body of work that challenges mainstream science. Yet they haven’t and can’t, because a robust and coherent denial of man-made global warming does not exist.

Our study describes the state of expert opinion, it does not define scientific truth nor does it tell people what to think. Climate scientists today overwhelmingly endorse the consensus view that humans are the cause of most of recent global warming. That’s a fact.

If the goal is to sell doubt and delay action on climate, it’s a fact that has to be denied.