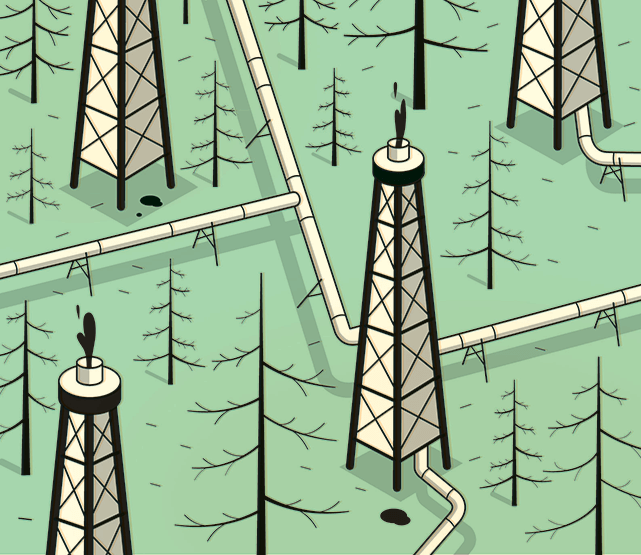 Anyone who has been paying attention to environmental issues in Canada knows that relations are downright toxic between the oil industry, environmentalists, aboriginal groups and local communities. The government as “referee” hasn’t been helping. Our once peaceful country is boiling with anger. Conflict is brewing.

As tensions rose across Canada with Natural Resources Minister Joe Oliver calling environmentalists “radicals,” I tried to imagine a solution. How can we develop our natural resources in a way that is respectful of the environment and stakeholders? Could the solution that brought peace to forestry’s “war in the woods” 20 years ago be the answer to ending Canada’s “battle over bitumen”?

The proposal is this: an oil stewardship council that would be modelled on the world-renowned Forest Stewardship Council (FSC). It would be a member-based, third-party audited certification system in which the four groups (oil industry, environmental, aboriginal and local communities) would share power equally. The federal government would be involved in a non-voting, observer role, as it is in Canada’s current FSC system.

There are hurdles – certified oil sounds like an oxymoron. ForestEthics co-founder Tzeporah Berman compared it to “organic cigarettes.” But as we’ll explore here, certification could improve the power dynamics and reduce the negative impacts of oil extraction. It is also highly doable. Oil, which flows through a common pipe, could be certified on a percentage basis just as recycled fibre is now.

Two people who saw promise in the concept are individuals who have actually done it themselves, on the ground, and in the boardrooms. Antony Marcil, past president of FSC Canada, said forestry is an extractive industry that overcame a history of abusive practices by adopting FSC standards. The fishing industry followed with the Marine Stewardship Council. “Why not an oil stewardship council with environmental and social standards that could be the basis of independently certified crude oil?” said Marcil.

Chris McDonell, co-chair of FSC Canada’s board and manager of aboriginal and environmental relations at forest product manufacturer Tembec, thought the concept was “right on the mark.” But he started by posing a key question: Is the leadership there? Specifically, he asked, “Where are the leaders in the sector or in the supply chain?”

McDonell said it wasn’t those close to the ground who saw the potential of FSC certification – it was the people far down the supply chain who directly faced customers. “The bigger the company, the more options they have to purchase raw materials. That’s why when an Ikea, a Home Depot or a Kimberly-Clark says something, everybody in the world pays attention.”

David Schindler, an internationally-respected environmental scientist at the University of Alberta, agreed that it will take that kind of pressure in the oil sands. “When CEOs start feeling that people are reluctant to buy, then they’ll come to the table. But it won’t be out of goodwill or green feelings.”

The idea of an oil stewardship council works in theory, but would any oil company join? Gord Lambert, vice-president of sustainable development at Suncor Energy, said he is familiar with FSC and praised its process as being as important as the product. He also was frank in recognizing that the oil industry has a problem. “The status quo is unacceptable,” he said. “You’re seeing gridlock. You’re seeing a failure to engage with one another on a human level….We’re not getting enough multi-stakeholder dialogue going.”

On the world stage Canada is getting a black eye for being a pusher of “dirty oil.” Internal government briefing notes to Oliver have warned his ministry about rapid growth of the resource’s development and its cumulative impacts on health and the environment.

“Oil sands greenhouse gas (GHG) emissions are set to be the fastest growing source of GHGs in Canada over the next decade, rising from 4 per cent of Canada’s total emissions in 2005 up to 12 per cent in 2020,” according to the notes. “There are concerns that oil sands development increases the risk of water contamination and that current water monitoring efforts are inadequate. Finally, there are also concerns about the impact of oil sands mining and tailings ponds on land, forests and wildlife.”

It is because of these concerns that Melina Laboucan-Massimo, a member of the Lubicon Cree First Nation, believes the oil sands cannot be certified the same way we currently certify forestry products in Canada. A Greenpeace campaigner in Alberta, Laboucan-Massimo has experienced first-hand the damage caused by “tar sands” extraction in her own community. “My wariness about certification is that it will just make people sleep better but it may not address the issues on the ground.”

What’s clear is that an oil stewardship council, if it were to work, would need all stakeholders at the table. But as Laboucan-Massimo said, “the trust is broken.” For many aboriginal groups, the days of talking are over. Treaty rights are not being respected. Major lawsuits have been launched. There is hope that certification could reopen dialogue, but the stewardship council’s charter would need to include aboriginals’ internationally recognized right to “free, prior and informed consent.”

It would also need to establish a strong set of operating principles that all stakeholders commit to as the price of admission. Merran Smith, director of the energy initiative at environmental charity Tides Canada, has a few ideas there. The organization has been active in promoting a new clean energy plan for the country that has buy-in from across industry and academia. “Firstly, we need to clean up our act on fossil fuels as we transition, and that’s where I see an oil stewardship council helping,” she said. “Secondly, it would need to be coupled with a clear commitment to outlining oil’s role in the transition to that clean energy future.”

But are the lessons learned from a forest stewardship council directly transferable to the oil industry? The answer is no, according to Jennifer Grant, director of the oil sands program at the Pembina Institute, an energy and environmental think tank based in Calgary. “A key distinction between a forest and oil stewardship council would be that forestry is a renewable resource that is inherently sustainable if it is done right, whereas oil extraction is non-renewable,” said Grant. “So it’s not about sustainability. It’s more about responsibility. The scale of the impacts, particularly the climate-related impacts, poses a much greater global threat both environmentally and economically with oil.”

Grant said a precondition to an oil certification system must be that the country provides an audited and credible greenhouse gas plan in sync with its international obligations. “So a broader oil stewardship council could actually act as an incentive to countries like Canada who have failed (so far) to regulate GHG pollution in the oil and gas sector.” She said Pembina sees value in market-based approaches to drive change and would consider being involved in such a council.

It might be a challenge at first rounding up so many diverse stakeholders to the same table, each with entrenched positions, when they know up front that any productive outcome will require compromise. But observers such as Tembec’s McDonell are believers in the “stone in the pond” principle – that when you throw a pebble in the water, ripples of change will follow.

“There’s the pragmatics and there’s the vision,” McDonell said. “Some environmental NGOs will say, ‘You’ve got to achieve 100 per cent and we won’t support anything less.’ That’s fine. What I say to them is ‘Okay, but we have to start somewhere.’”