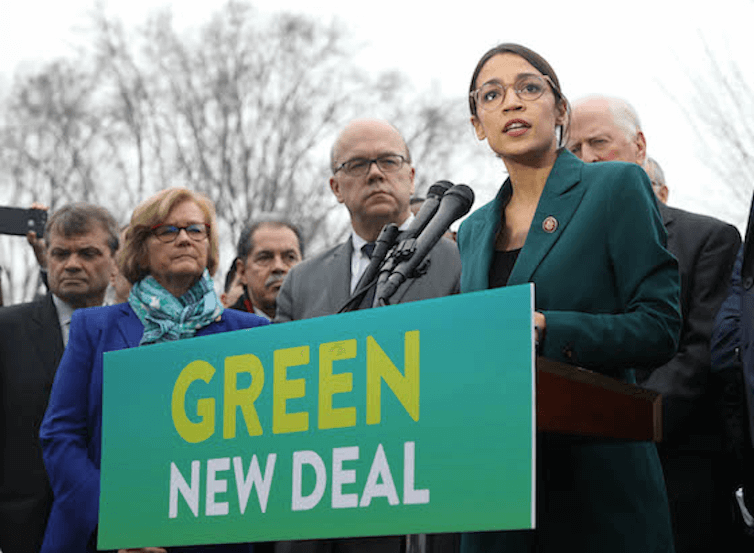 Looking to own the anti-Trump vote in next year’s elections, the Democrats have been rallying around the Republicans’ greatest nightmare: the Green New Deal (GND). The ambitious, but non-binding, resolution submitted to Congress in February proposes to eliminate “pollution and greenhouse gas emissions as much as technologically feasible” over 10 years. It would also require the U.S. to shift away from fossil fuels in favour of “clean, renewable and zero-emission energy sources.”

But Republicans, led by President Donald Trump’s tweets, quickly labelled the proposals “extreme” and warned the GND would abolish oil and gas, cars and airplanes, and even cows.

With recent polls indicating six out of 10 Americans are “alarmed or concerned” about climate change, the resurging Democrats figured it’s time to plant the green flag. But some Republicans also welcomed the move, knowing that climate mitigation and adaptation are hard work, and not everyone wants to face the adjustments ahead – especially with an estimated price tag of $50 trillion. (That figure excludes the costs of the GND’s social goals, which include more accessible health care and guaranteed jobs for workers displaced in the transition.)

Republican strategist Alex Conant says introducing the GND “was a mistake by Democrats, because it took an issue they have been winning on and turned it into a liability.” He told BuzzFeed News that the proposal actually “clarifies the Republican position. It’s much easier to say I care about climate change, but oppose the Green New Deal.”

The GND, then, may not win or lose on its merits, but on America’s ability to have a grown-up discussion about climate.

How achievable are the goals of the GND? In an interview with Popular Science, Stanford University engineering professor Mark Jacobson said the transition to 100% clean, renewable energy within 10 years is “technically and economically possible… But for social and political reasons, it will probably take longer, maybe up to 2050.”

Jacobson’s research indicates that by 2050, all U.S. energy needs could be met with a combination of 30.9% onshore wind, 19.1% offshore wind, 30.7% utility-scale photovoltaics (PV), 7.2% rooftop PV, 7.3% concentrated solar power with storage, and 3% hydro power – with lesser contributions from geothermal, tidal and wave power.

Some observers are just excited that after the inaction of the Obama years and Trump’s outright hostility, the climate debate is on again.

“I feel more optimistic about our collective chances of averting climate breakdown than I have in years,” wrote activist Naomi Klein on TheIntercept.com. “For the first time, I see a clear and credible political pathway that could get us to safety, a place in which the worst climate outcomes are avoided and a new social compact is forged that is radically more humane than anything currently on offer.”

A version of this story appears in the Spring Issue of Corporate Knights.