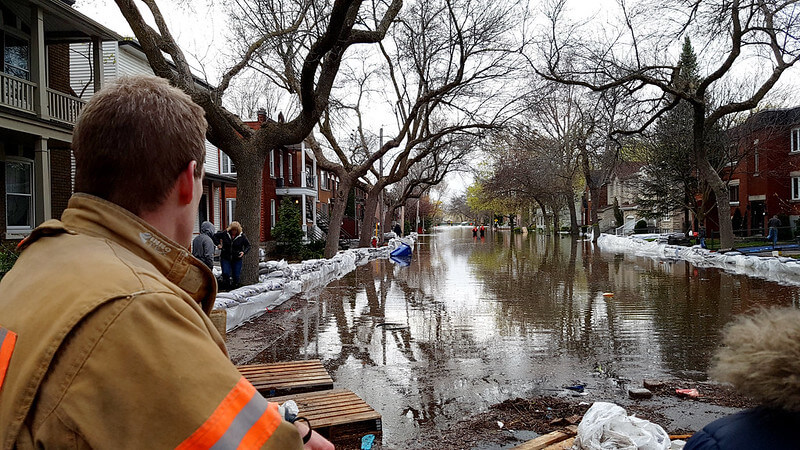 The Montreal floods of 2017, image courtesy of Coastal Elite

As world leaders converge at this week’s climate summit in Madrid to debate how best to shift to a net zero-economy, Michael Sabia is leaving the helm of Canada’s second-largest pension plan having firmly placed Quebec’s retirement savings at the forefront of the global movement for low-carbon investing.

Sabia, who recently announced he’s stepping down from the Caisse de dépôt et placement du Québec (CDPQ) in early 2020, ushered in a fundamental change in how the $326 billion Quebec pension fund treats the climate-related risks and opportunities that are embedded in the 21st-century global economy.

In doing so, CDPQ is challenging the traditional view of pension managers and other institutional investors.

Despite the looming impacts of climate change, many fund managers operate with a view that their fiduciary obligation limits their ability to consider environmental, social and governance factors in investment decisions to those that are clearly quantifiable as short-term, material risks.

In contrast, CDPQ is part of an international movement to put the climate crisis at the centre of the investment process.

That effort got a boost this week when the United Nations named outgoing Bank of England Governor Mark Carney as special envoy on climate action and finance, and Carney noted that “investing for a net zero world must go mainstream.”

Carney’s appointment comes amid new warnings about the urgency of climate actions, as the United Nations Environment Programme indicates that the costs of averting climate disaster are mounting exponentially due to widespread foot-dragging.

CDPQ made its big stand two years ago. In 2017, Sabia and his team set ambitious targets to ratchet up investment in low-carbon assets by 50 per cent by the end of 2020. They have since raised that goal to 80 per cent – for an increase of $15 billion. CDPQ also aims to reduce the greenhouse-gas intensity of its portfolio by 25 per cent by 2025.

More importantly perhaps, it adopted a clear strategy for achieving those targets, including a strict carbon budget for investment managers with bonuses tied to their success in staying within those limits.

In an interview, Sabia said taking action on low-carbon investing is not a political act, though it is supported by the Quebec government. Rather, it reflects CDPQ’s belief that it has a fiduciary duty to its beneficiaries – Quebec’s present and future pensioners – to account fully in its decisions for the risks and opportunities posed by the climate crisis.

“This comes from us, and it comes from our strong belief about the upside potential in investment in measures to address climate change,” he said.

“We think being aggressive about this is an essential element of being a good fiduciary now. We think it is an integral part of a well-managed investment fund. Because this is not going away. This is not some passing fad; this is going to be with us for 10, 20, 30 years and more.” 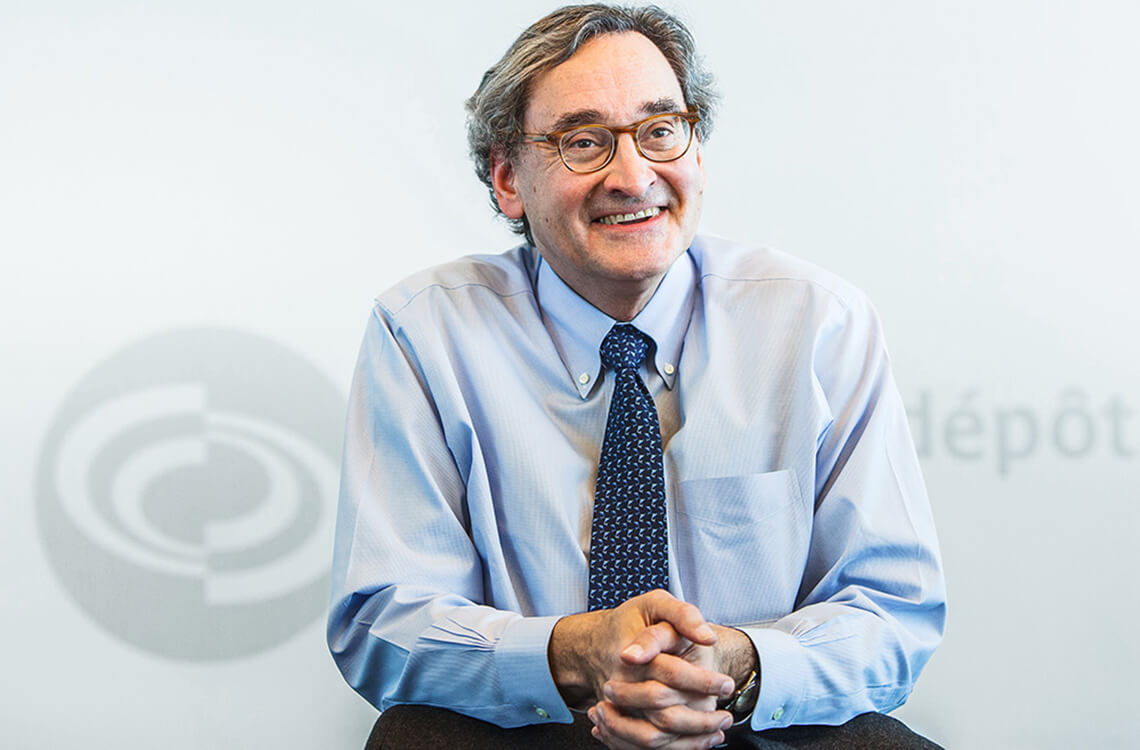 “We think being aggressive about this is an essential element of being a good fiduciary.”

In making the transition, CDPQ has played a leadership role among institutional investors who are grappling with how to manage those pools of saving to ensure they can meet their long-term obligations, in the face of the anticipated massive disruptions that will result from climate change.

Premier Jason Kenney fired back, saying Moody’s is “buying into the political agenda emanating from Europe, which is trying to stigmatize development of hydrocarbon energy.”

But European institutions are not alone. The Bank of Canada has said climate change poses risk to the financial system, while Canadian securities regulators are urging companies to provide better disclosure as to the climate-related risks they face.

At the United Nations climate summit this fall, the Quebec pension fund helped launch the Net-Zero Asset Owner Alliance, a group of investors who manage $2.4 trillion (U.S.) in assets.

The group committed to having carbon-neutral investment portfolios by 2050. (During the fall election, Prime Minister Justin Trudeau announced a similar goal of having Canada achieve a net-zero carbon economy by that same year.)

Other than the CDPQ, the Net-Zero Asset Owner Alliance is largely a European effort, with major institutional investors such as Germany’s Allianz, France’s Caisse des dépôts and insurance giant Swiss Re in the forefront. The California Public Employees’ Retirement System (CalPERS) is also a member.

Fiona Reynolds, CEO of the UN-backed Principles for Responsible Investment which is a co-convenor of the Net-Zero Asset Owner Alliance, said at the time, “[Pension funds and insurers] have the ability more than any other investors to move this agenda forward by outlining the material risks of climate change to those managing their assets.”

In an interview, she said there will be three complementary approaches: engaging with companies to encourage them reduce emissions; divesting from holdings that have a high carbon footprint, and investing in emerging technologies and low-carbon assets.

That effort will pave the way for other institutional investors to take more ambitious action, said Sean Cleary, professor of finance at Queen’s University and executive director of the newly established Institute for Sustainable Finance.

“It’s an important signal to other players that this is happening as part of the long-run changes to the global economy,” Cleary said. “This isn’t about sacrificing returns; it’s about seizing opportunities by being ahead of the curve.”

Other institutional investors are not standing on the sidelines. The Canada Pension Plan Investment Board (CPPIB) and the Ontario Teachers’ Pension Plan (OTPP), for example, say they are taking a more systematic approach to assessing climate-related impacts in their portfolios and are advocating for more robust corporate disclosure of the risks and opportunities.

Still, many institutional investors, including CPPIB, remain wary of acting too aggressively lest they fall afoul of fiduciary regulations that require them to act in the best interests of their plan members – or premium payers, in the case of insurance companies.

In a report released last June, the federal Expert Panel on Sustainable Finance recommended the federal government clarify the rules on fiduciary responsibility.

“This isn’t about sacrificing returns; it’s about seizing opportunities by being ahead of the curve.”

The panel was led by Tiff Macklem, former deputy governor of the Bank of Canada and current dean at the University of Toronto’s Rotman School of Management, and included representatives from CDPQ, OTPP and the Royal Bank of Canada. In their report, the expert quartet also recommended that corporations, lenders and investors disclose their climate-related financial risks and opportunities, in line with the Taskforce on Climate-related Financial Disclosures, which was spawned by Michael Bloomberg and Mark Carney.

The panel said widely used interpretations of fiduciary duty and materiality are out-of-step with the reality of climate change and its financial implications.

“The Canadian government has a clear opportunity and imperative to clarify that fiduciary duty today does not preclude the consideration of relevant climate change factors. In fact, evolving sustainability principles and international best practice increasingly require such considerations.”

Sabia echoed that view, arguing that a failure to properly assess climate risk and opportunity will undermine long-term returns that Canadians will depend upon for their retirement.

“There is a generally held belief in the investment business that addressing the issue of climate change involves compromising returns, and therefore some investors argue that it is not consistent with honouring an investor’s fiduciary obligation,” he said.

“We think that’s wrong. We think with the measures needed to address climate change, there are some significant investment opportunities.”

Sabia argued that fiduciary responsibility requires an institutional investor to invest in order to enhance the long-term health of the economy, and to align its values with that of its plan members.

CDPQ’s assets now include renewable energy projects and public transit systems such as the $6.3 billion “carbon neutral” light rail system in Montreal. They also include the CIBC Square development in Toronto – which incorporates leading-edge energy efficiency and solar technology – and the massive Peter Cooper Village–Stuyvesant Town residential complex in Manhattan, which has been equipped with new HVAC systems and energy-efficient windows along with some 10,000 solar panels on the roofs.

While CDPQ doesn’t break out its returns on that basis, Sabia said the low-carbon assets are performing as well as or better than high-carbon ones.

Over the past five years, CDPQ earned an 8.3 per cent annualized rate of net return, beating the benchmark portfolio against which it measures itself, which posted a 7.2 per cent result.

The embedding of climate change issues into investment decisions involved a significant disruption at CDPQ. Dealmakers were previously required to screen for environmental, social and governance (ESG) factors but had no limits imposed by senior management.

“The biggest challenge was getting the organization to focus on cultural change,” the departing CEO said.

The targets that were adopted were the result of a lengthy analysis of what the pension fund could achieve without sacrificing returns, with some stretch goals that challenged those assumptions.

“The biggest challenge was getting the organization to focus on cultural change.”

Each investment team is given a carbon budget, the sum of which would result in a steady reduction to the 2025 target. The investment managers’ year-end incentive bonuses are adjusted according to whether they fell short, met or beat their target. If you meet the target, your bonus is a little bigger; if you miss it, your bonus is a lot smaller.

“In an investment business like ours, compensation is an important signalling device around priorities,” Sabia said.

CDPQ’s chief stewardship officer, Bertrand Millot, was added to an investment and risk committee that reviews all major financing decisions.

Sabia said it was important that senior management did not direct the fund managers to target specific industries, technologies or companies, either for investment or avoidance. “We gave them the carbon budgets, but we didn’t want to take the decision-making out of their hands.”

In addition to loading up on low-carbon assets, CDPQ will reduce the overall carbon intensity of its portfolio by 25 per cent by 2025. It has not, however, declared a divestment or ban on new acquisitions in the fossil fuel sector, unlike some European and American asset owners.

However, there is little likelihood of new investment in coal or oil companies given the investment teams’ declining carbon budgets, said Millot. He added the risk assessment for crude producers will depend considerably on their operating costs. CDPQ has scrubbed coal from its holdings, but still retains major stakes in oil and gas companies, with 7.41 per cent of its equities invested in the sector compared to 1 per cent at OTPP, according to S&P Capital IQ.

Instead, CDPQ will work with companies in which it has invested to improve their carbon footprint while retooling its portfolio over time to become net-zero for carbon by 2050. (“Net-zero” suggests it may still hold some assets that emit greenhouse gases, but it will balance those with companies that remove carbon from the air.)

In the new year, Sabia will take up a new position as head of the University of Toronto’s Munk School of Global Affairs & Public Policy. He will bring his climate-change focus with him.

“You can’t think about the state of the world or how the global system works without having climate change be a part of that perspective,” he said.