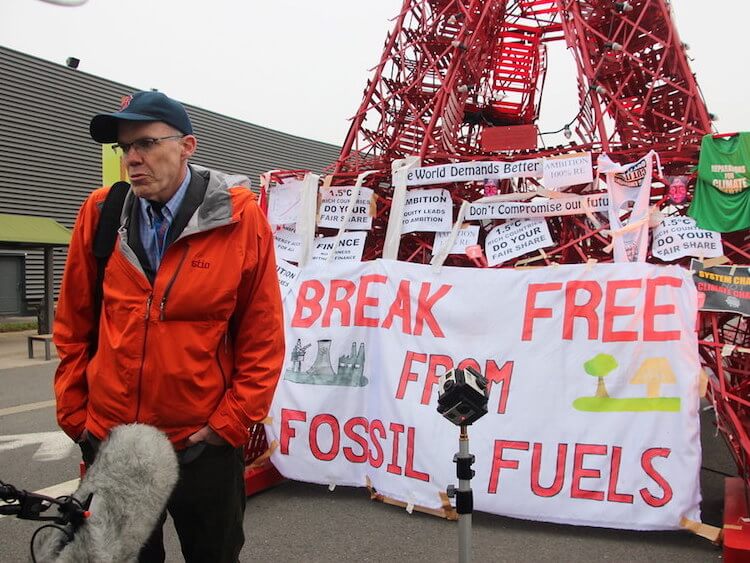 It’s been a busy spring for the divestment movement and everyone working to get big money out of fossil fuels. This week, New York State held public hearings debating the issue of divesting the New York State Common Retirement Fund from oil, coal and gas. Last week, Denver announced that its US$5.3 billion portfolio had liquidated its holdings in Exxon and Chevron – just one month after Denver’s mayor announced the city was going fossil-free. And the UK’s parliament recently took a tentative first step towards shifting its pension away from fossil fuels before officially declaring a “climate emergency.”

To add some personal flavour to the divestment issue, we asked one of the architects of the movement – climate activist, author and 350.org co-founder, Bill McKibben – to chat with us about how he invests his own money for our inaugural Money Talks column.

What sparked your initial idea of asking institutions to drop their investments in fossil fuels?

Naomi Klein and I were reading the same somewhat obscure report from a London-based think tank, Carbon Tracker Initiative. It showed that these companies had far, far more carbon in their reserves than any scientist thought we could ever burn. Both of us thought: viewed this way these are rogue companies, trying to profit off unfathomable destruction. Since we’d both been active in the anti-apartheid divestment movement a generation earlier, we figured maybe it might be appropriate here.

Who was the first person you were able to convince to divest?

Pride of place goes to tiny Unity College in rural Maine. The president got up during one of the roadshows of the Do The Math tour to make his announcement  – an $8 million endowment, I think. Now that we’re at $8 trillion it doesn’t seem so big, but it got us going.

What’s been your biggest win so far?

The Norwegian sovereign wealth fund? The nation of Ireland? New York City’s pension fund? Half the universities in the UK? The first win that really started to change things fast was perhaps the Rockefeller family, who divested their charities. If the original oil fortune was done with oil…

Why do you think there are so few Canadian organizations on board with divestment?

Because Canadians, pleasant and conflict-averse, can’t bring themselves to say to Alberta, ‘you simply can’t dig up all that oil and burn it, it by itself will use up a third of the planet’s carbon budget.’  So they’ve never been able to really grapple with climate change. Look at the tragic positions that Justin Trudeau has gotten in trying.

The Canadian responsible investing sector has focused more on shareholder engagement to push for change from the inside. What are your thoughts on this tactic?

Petroleum producers have, not surprisingly, tried to discredit the divestment movement. What’s the biggest myth being propagated about divestment?

That it doesn’t accomplish anything. The industry has pushed it with great diligence (which should tell you something right there) but by now we’ve seen Shell having to declare it a material risk and Peabody Coal listing it as a factor in its bankruptcy. In Politico a few weeks ago, one coal exec after another explained they couldn’t raise capital anymore because there were too few funds left willing to invest

Your focus has been on convincing institutions to divest, but many individuals reading this will be thinking of doing the same. Do you think the ripple made by an individual’s decision to buy or sell a stock or fund makes any difference in the grand scheme of things?

Well, it’s more important to move institutionally, but to the extent that changing your light bulb matters, divestment would matter more.

Have you divested your personal investments to reflect your values?

I’m a…writer and volunteer organizer. What investments I have reflect my values.

Can you give us a rundown on which investments you hold?

How has investing with your values worked out for you financially?

Living in the woods has worked out for me financially.

How has divesting worked out financially for those governments and institutions that have chosen this tactic?

Yes, anyone who divested has made out like bandits – the fossil fuel sector has badly underperformed the larger market. So, for instance, the New York State pension fund would have $19k more dollars per pensioner had it done the right thing when all this started.

What’s next for the divestment movement?

I think we’re aiming for $10 trillion by next year.