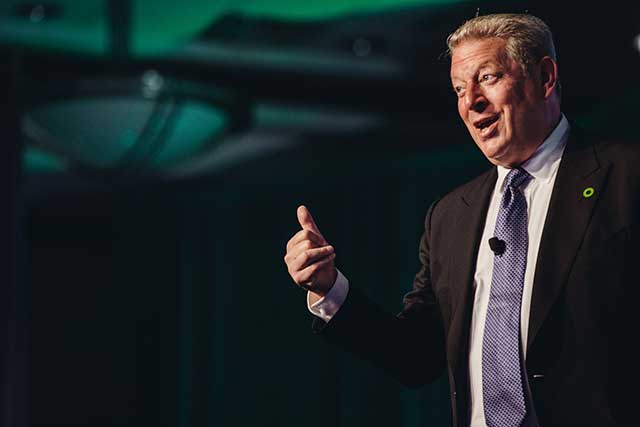 There was something substantially different about Al Gore’s two-hour presentation Thursday in Mississauga, Ontario, where more than 500 people gathered to become certified climate presenters as part of the Nobel laureate’s Climate Reality Project.

The number of people in attendance has grown substantially since 2008, which was the last time the former U.S. vice-president conducted his training session in Canada. But what stood out most – at least to those who remember the 2008 sessions – is that the content of Gore’s latest presentation is more hopeful in tone and direction.

Seven years ago, they say, more than 95 per cent focused on the climate problem – rising temperatures and ocean levels, melting glaciers, the increased frequency and intensity of droughts, heat waves, flooding, forest fires; and how all of this threatened public health, food and water supply, and as a result global stability.

“The presentation now is a lot more solutions-based compared to 2008 when I was trained,” says Corrina Serda, 19, who became a certified presenter at the age of 11. Until recently, that made this Port Elgin resident the youngest person to do so. Since then, she has given more than 180 presentations across Ontario to an estimated 60,000 people. “He (Gore) has shifted more from the science and the problems to the solutions,” she says. “People are really, really excited. They’re just really energized.”

It’s not that Gore doesn’t talk about the bad stuff. That still represents about half of the presentation, and it’s far from uplifting and energizing.

As he details the latest science explaining what’s happening to our planet, Gore’s famous slideshow reminds us of the devastation caused by Superstorm Sandy in the U.S. northeast, the 2013 floods in Toronto, Calgary and Houston. We see the droughts that are killing crops and people from California to Pakistan, not to mention melting roads in India. He shares jaw-dropping images of forest fires in B.C., Saskatchewan and Russia.

He shows highways crumbling, vehicles and houses floating down swelled rivers, mudslides that have buried villages, and bridges completely destroyed by violently flowing water. “The structures we built were designed for a different era,” says Gore. “And it’s the poor who have the least ability to recover and are hit hardest.” 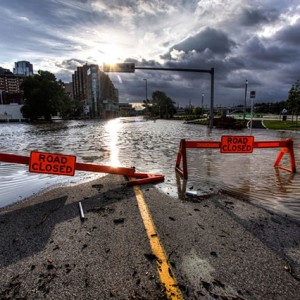 Gore gives us a high-level overview of what’s going on. “Warmer air can hold more water vapour,” he says, explaining that each degree F of increase expands how much water the air can hold by 7 per cent. The air is soaking up more water from lakes and oceans, but also from soil. When that rain (or snow) falls, it falls faster and harder than before. “When downpours occur, they’re bigger on average now,” he adds.

At the same time, when that moisture is pulled from soil and dumped somewhere else, it creates the conditions in some places for persistent drought and longer wildfire seasons. “In Canada the average amount (of forest) burned has doubled since the 1970s. We attribute this, and I’ll be quite clear, to human-caused climate change,” Gore says.

How this all impacts global security is perhaps the most disturbing. Some diseases spread. Food supply is disrupted and prices spike when drought and floods destroy crops and livestock, while water scarcity results when supplies dry up or get contaminated by flooding. Uprisings and conflict in India, Tunisia and Syria, among other countries, have all to some extent been preceded by food riots or water disputes.

“The impact of climate on agriculture is something we’re going to hear a lot more about,” Gore warns, pointing to research that shows how a 1 degree temperature increase can reduce wheat yields by 20 per cent by making water-starved crops vulnerable to pests and disease. “As temperatures rise, people, crops, energy systems, business and industry, animals, all need more water.”

As if that’s not enough to sour the milk in your morning corn flakes, Gore reminds us of some of the feedback loops that pose serious threats. For example, methane gas leaking from melting permafrost in Arctic tundra, an extensively studied area where “measurements are not comforting,” he says, rolling a video of scientists on a frozen Siberian lake poking a hole in the ice and lighting the emerging methane gas on fire. A torch-like flame shoots out of the hole and the scientists jump back in alarm.

Remember those mysteriously massive craters discovered last year in northern Russia? Turns out they were created by underground explosions, now believed to be the buildup of methane gas caused by warming of the permafrost, Gore explains.

Forest fires happening elsewhere aren’t helping. They’re dropping soot on snow and ice, creating a dark surface and stimulating the growth of dark algae that absorb more energy (heat) from the sun. This only accelerates melting.

Down, But Not Doomed

Gore admits the impacts we’re witnessing worldwide and what the science is telling us can be deflating. “It’s important to deal with the heaviness of these issues,” he tells the audience. At the same time, he adds, “You cannot allow yourself to feel despair. It’s pointless. But we have work to do. The truth is some damage is going to take place. It’s unavoidable.”

What we’re fighting to do now is limit that damage so that it’s less difficult to manage and adapt to, he explains. “The answer is pretty clear. We’ve got work to do. We can win this, but we have to be clear-eyed about what the situation is.” 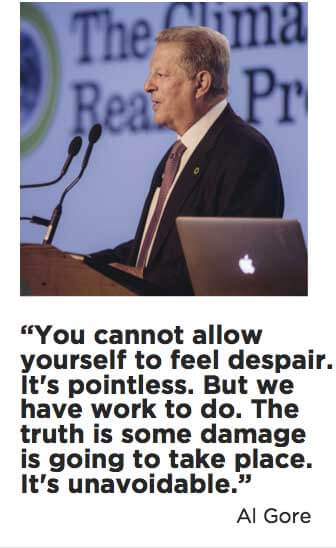 From there, he starts to lift the audience, like a disc jockey playing the crowd. This is where Al Gore 2015 stands apart from Al Gore 2008.

Gore then shows a compelling slide of coal plants in the United States that have been retired or are planned for retirement, as well as new coal plants that have been proposed but have since been cancelled. Expressed as dots on a map, there are too many of them to count.

On the topic of renewable energy, and particularly the falling cost of solar, Gore gets visibly excited. He tells us that the amount of wind power generation is 12 times larger than what experts predicted back in 2000. Solar is 62 times larger.

He throws up a line chart showing how quickly solar power is taking off. “This is an exponential curve,” he says. “When you see something like this in technology, just stand back, because it’s going to continue… solar is about to explode worldwide.”

The reason, of course, is how quickly solar costs have fallen. In many parts of the world, solar power has achieved grid parity – meaning it’s no more expensive than purchasing power off the grid. A research report from Deutsche Bank earlier this year concluded that 47 out of 50 U.S. states will cross the grid-parity barrier by 2016.

Just last week, it was reported that a Nevada utility controlled by investment icon Warren Buffett struck a long-term power purchase agreement (PPA) with First Solar that will see it get solar electricity at about 4 cents per kilowatt-hour, easily competitive with both coal and natural gas and far less expensive than nuclear. On that deal, a First Solar spokesperson said the trend in solar costs speaks for itself: “We expect to see more PPAs pricing out at comparable levels.”

“Nobody thought it would be possible in this timeframe, but it’s happening right before our eyes,” says Gore, pointing to the phenomenal growth of solar development in the U.S. alone. “This is really a dramatic change that should give us cause for joy and celebration, not hopelessness and despair. We’re going to win this. We just have to speed up the victory.”

To explain why we’re at an inflection point for solar and other renewables, Gore uses the analogy of how an ice cube becomes water when the temperature shifts from zero to just 1 degree C. Prior to grid parity, the solar market was the ice cube and capital into that market was frozen. With grid parity, the market suddenly melts and becomes liquid, causing capital to flow quite easily and readily. 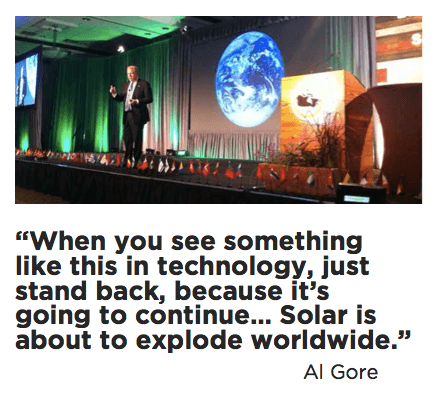 And energy storage technologies are heading in the same direction, he says, with costs having fallen 90 per cent over the past 20 years and expected to be cut in half again over the next two years.

Together – solar plus storage – is a powerful combination that will challenge all forms of thermal power generation, from coal and natural gas to nuclear. “This is a big deal, and it’s a cause for great hope… the age of renewables is beginning.”

Near the end of his presentation, Gore gives a final jab to politicians who continue to deny and delay when it comes to climate action. How do we eliminate fossil fuel subsidies? How do we put a price on carbon in markets? “The way to do it is to put a price on denial in politics,” he says to much applause.

His final message to the group: “Don’t give up.”

For certified presenters such as Corrina Serda, who are at the gathering to act as mentors to future presenters, there’s no sign of giving up. Quite the opposite, in fact. Not only are the training sessions attracting more people, the mix of participants is getting younger.

Serda says she is most impressed that out of the 600 people attending the Toronto training session, about 100 of them – or 17 per cent – are 25 years old or younger. Just this year there have been a few nine year olds trained.

“That to me is pretty inspiring and amazing,” Serda says. “I know too many people my age who are a little cynical, so I’m always happy to see young people who are hopeful about the future.”

Compared to 2008, hope is definitely in the air. Adds Serda, “I feel more optimistic, personally.”