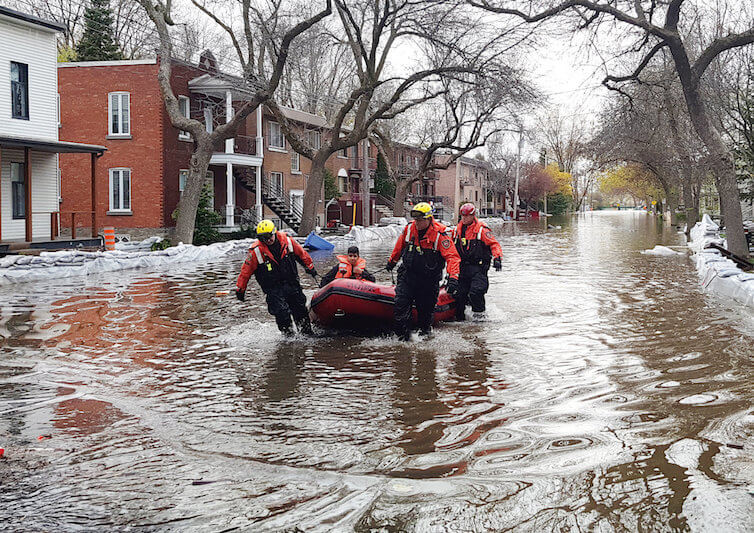 Some good news for a change: Hundreds of municipalities around the globe and now Ireland Scotland, Wales and the U.K. are stepping up to declare climate emergencies. And some are making the declaration mean something.

As water levels continued to climb along the Ottawa River in late April, the nation’s capital became one of the latest Canadian towns to declare a climate emergency. It’s not a moment too soon. After 30 years of work by the largest scientific collaboration in human history, the Intergovernmental Panel on Climate Change, the climate crisis that humanity faces is now beyond question. A generation after they were first predicted, the impacts are now increasingly visible in Canada and around the world. Fires, floods, droughts, storms, wind and extreme heat are becoming increasingly severe.

In Ontario alone, insured losses from extreme weather events exceeded $1.3 billion in 2018. Uninsured financial losses by individuals, companies and institutions are often estimated to be one to three times as large as reported insured losses. On top of that, the Insurance Bureau of Canada reports that governments incur about $3 in damage to infrastructure and other public services for every $1 of those insured losses. And all these figures only cover losses measured directly in money, omitting significant health and environmental damage.

In the face of this crisis, as well as the collapse of biodiversity, it is beyond tragic that so many “senior” levels of government are doing so little – or worse, in some cases undoing a decade or more of hard work. With a federal election looming, the future of federal climate action is also uncertain.

In these dispiriting circumstances, municipal leadership is of great importance. As the owners and operators of most of Canada’s infrastructure, municipalities are at the front line of much climate damage. In many ways, they have more to lose from climate inaction than other levels of government. For one, they bear increasing social welfare needs as climate change disproportionately affects the poorest and most vulnerable. Municipalities are also much more vulnerable to liability lawsuits than senior levels of government, and municipal representatives are more visible and accountable to their constituents.

Fortunately, municipalities can also do something about it, which is why it’s exciting to see so many Canadian municipalities joining the ranks of over 520 councils around the world in declaring climate emergencies.

Most of these are in Quebec, where over 300 municipalities have signed “declarations d’urgence climatique.” Others in Canada include Halifax, Vancouver, Kingston, Hamilton, Richmond, London, Burnaby, Nanaimo, Burlington, St. Catharines, Moncton, and Old Crow!

A declaration will not, of course, accomplish anything unless it’s followed by real action. Only significant changes to business as usual can meaningfully affect the trajectory we’re on.

Aside from the enormous cost of adapting to the wilder, weirder weather that’s coming, adaptation will likely become impossible if we don’t reduce emissions. And climate pollution mitigation is where we face the biggest policy and implement gap.

Where can municipalities cut emissions?

The majority of urban GHG emissions come from three sources:

Municipalities can tackle the climate pollution they themselves emit through heating and cooling municipal buildings, water treatment and use, vehicle fleets, waste management, etc. But they can have the largest climate impact by influencing the emissions of others – namely, all of us who live and work in and visit their municipalities.

It’s not just about land use bylaws and taxes, essential though they may be. Municipalities can galvanize private and public action through their targets and the examples that they set. Their relationships with others can build coalitions, generate buy-in and facilitate implementation of new ideas, new financial tools, and new standards of practice.

Vancouver is trying to lead the way. In January, it  adopted its climate emergency declaration, giving staff 90 days to come back with a plan of action. On April 29, Vancouver city council approved a Climate Emergency report with six new pollution reduction targets (called “big moves”) and 53 “accelerated actions”.

The “six big moves” are:

The true significance of these targets won’t be visible until they start changing council decisions, especially on budgets, on infrastructure and on development. Council has promised to put a “climate lens” on its 2020 budget. In the meantime, Vancouver has pledged an impressive list of “accelerated actions” such as:

It’s inspiring to see this kind of municipal leadership at a time when good environmental news is in such short supply. Hopefully, Canadian cities won’t be alone in calling climate change what it is – an emergency – and then acting accordingly. Monday, the Ontario legislature will be debating an NDP motion to declare a climate emergency in this province. Any meaningful hope now has to come from a willingness to try new ways of doing things, and as The Democracy Center’s Jim Schulz said,  “from knowing that what is truly possible never reveals itself until we take the risk to seek it.”

Dianne Saxe is president of Saxe Facts, a business providing strategic advice and presentations on climate, energy and environment. She is the former Environmental Commissioner of Ontario and is a certified environmental law specialist.