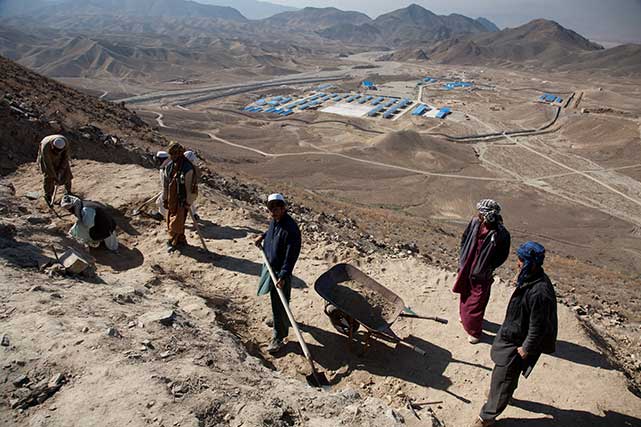 Remains of a Buddhist monastery at Mes Aynak, Afghanistan. Photo by Jerome Starkey

Newfoundland Premier Paul Davis says a potential deal between Hydro-Quebec and a New England energy company won’t hurt Newfoundland and Labrador’s prospects of selling power generated by the Muskrat Falls hydropower station. “While there is a level of competitiveness, there is more demand and growing demand for hydroelectricity than I believe that Quebec and Newfoundland and Labrador is going to be able to supply,”  Davis said at a meeting between stakeholders this week.

What’s better for Afghanistan’s future: Buddha tours or a copper mine?

About an hour’s drive south of Kabul, there’s a vast Buddhist archaeological site dating back at least 1,500 years. It happens to be sitting on top of one of the biggest untapped copper deposits in the world. Security issues will have to be addressed before there can be any tourism or copper mining, but what happens after that?  Mining is widely seen as a future backbone for the economy, but there’s also the potential for a Vietnam-like tourism boom in the decades ahead.

The fight over climate policy in Canada puts in stark relief the main challenge confronting political leaders in carbon-rich countries. To wit, how does a country whose economy is dependent on fossil fuel production reconcile itself with public demands to address climate change? Dennis J. McConaghy, the former executive VP of corporate development at TransCanada, believes that the only way out for Canadian politicians and the Alberta oil sector is to embrace carbon pricing.

Corporate responsibility programs boost sales, shareholder value and employee productivity, according to a study by IO Sustainability and Babson College, which set out to “fill a knowledge gap” around the real impact of improved sustainability performance on business. They determined that well-designed CSR programs have the potential to increase a company’s revenues by up to 20 per cent, strengthen customer loyalty by 60 per cent and allow for premium prices to be charged on products and services.

Corruption acts as a direct threat to sustainable development around the world – including many parts of Africa. Beating corruption will require a collective effort, argues Mzumbe University professors Shiv Tripathi and Ganka Nyamsogoro, but anti-corruption education in business schools has an important role to play in this fight. Three business schools in Africa are already putting this theory to the test by introducing an anti-corruption programme sanctioned by the United Nations into their classrooms.

Turning city dogs into power providers, one poop at a time

The average dog is responsible for twice the amount of feces a human produces. Ron Gonen, NYC’s former recycling boss, sees opportunity in those droppings. He has created a program which aims to use small anaerobic digesters at dog parks to turn poop into methane, which can be used as fuel to power city park equipment. City staff are weighing Gonen’s proposal for a pilot project. Similar projects have been proposed in Boston, at Arizona State University and at several Australian and U.K. municipalities.