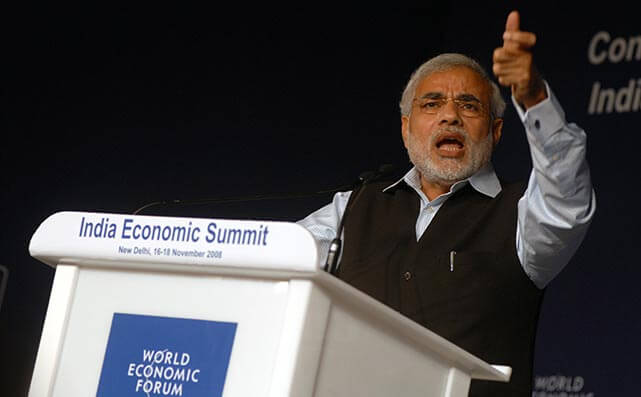 Narendra Modi when he was the Chief Minister of Gujarat speaking at the India Economic Summit in New Delhi in 2008.

The United Nations Intergovernmental Panel on Climate Change released its latest report yesterday in Copenhagen, warning of “severe, widespread and irreversible impacts” unless carbon emissions are cut rapidly. The report synthesizes the findings of the Fifth Assessment Report, which the organization calls “the most comprehensive assessment of climate change yet undertaken.”

At the launch event for the report, United Nations Secretary General Ban Ki-moon asked pension fund managers to divert money from fossil fuels toward “climate-friendly renewable resources of energy,” saying it will be difficult for governments to tackle climate change without the full participation of the business community and civil society.

In two separate articles yesterday, New York Times writers pointed out that governments need to increase their budgets for the research and development of new renewable energy technologies. The IPCC report shows that less than $400 billion a year is being spent worldwide to reduce emissions and cope with climate change. This is very little compared to the $600 billion a year that oil companies are spending to find more fossil fuels, as well as the additional $600 billion that governments are spending to subsidize fossil fuel consumption, Justin Gillis reported.

Andrew Revkin pointed out yesterday on his New York Times blog, Dot Earth, that there is a disconnect between the risks associated with climate change and the R&D that is needed to mitigate those risks. “Governments define their near-term and long-term priorities line item by line item on every fiscal year budget,” said Constantine Samaras, an assistant professor in the Department of Civil and Environmental Engineering at Carnegie Mellon University.  The amount of money dedicated to energy technology in the U.S. shows that climate change policy is “incremental, rather than transformative,” said Revkin.

He also pointed out that the IPCC failed to make this clear in its latest report. Jean-Pascal van Ypersele vice chairman of the IPCC said he agreed that the report could have made a stronger statement in this regard.

Meanwhile, the two biggest oil companies in the U.S. – Exxon Mobil and Chevron – are still going strong, even as oil prices fell 18 per cent in the last quarter. Lower gas prices are actually making it easier for them to make money because both companies have integrated business models that give them “competitive advantages in scale, efficiency, technical and commercial capabilities, regardless of market fluctuations,” Exxon CEO Rex Tillerson. The Globe and Mail reported last week that Exxon Mobil saw a 38 per cent rise in its refining and chemical operations and Chevron tripled its profits from its “downstream operations.”

Narendra Modi, India’s Prime Minister, said on Sunday that he was committed to tracking down “black money” that has been deposited illegally in foreign banks for the purpose of avoiding taxes. Modi said he did not know how much money had been stashed overseas, but he said that money belongs to the poor of the country.  Global Financial Integrity, a Washington-based think tank estimates that over $300 billion in illicit funds left the country between 2002 and 2011. Reuters reported yesterday that “the government has already submitted a list of people with illegal foreign bank accounts to the Supreme Court of India, which is monitoring the case.”

The U.S. Department of Education released rules last Thursday that would require for-profit universities to improve the job prospects of their graduates or risk losing 30 per cent of their federal funding. The rule is aimed at schools whose graduates face annual loan payments that are greater than 12 per cent of their annual earnings. While the rule has been softened from its original version after years of lobbying and debate, it would affect 840,000 students enrolled in 1,400 programs that current fall short of the performance indicators, ThinkProgress reported last week.