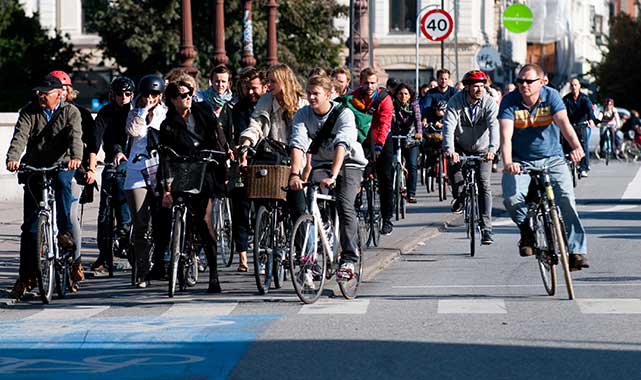 Corporate Knights’ Measuring Sustainability Disclosure: Ranking the World’s Stock Exchanges 2015 report was officially released this week at the London Stock Exchange. The Financial Times focused on the flatlining pace of sustainability disclosure rates among the world’s largest listed companies, while the Globe and Mail chastised companies listed on the Toronto Stock Exchange for finishing 24th out of the 45 exchanges analyzed.

Climate-smart cities could save the world $22tn, say economists

Putting cities on a course of smart growth – with expanded public transit, energy-saving buildings, and better waste management – could save as much as $22 trillion. The Global Commission on Economy and Climate, an independent initiative by former finance ministers and leading research institutions from Britain and six other countries, found climate-smart cities would spur economic growth and a better quality of life while successfully cutting carbon pollution.
—

Big Oil may soon have to disclose payments to foreign governments

A federal judge ruled Wednesday that the Securities and Exchange Commission (SEC) must finally complete a long-delayed rule that would force oil, gas, and mining companies to reveal how much they’re paying governments in countries where they extract resources. The ruling in favour of Oxfam America is a partial victory for activists who have been dismayed at the SEC’s sluggish pace in writing the regulation, which is required under the 2010 Dodd-Frank law but has been trapped in legal limbo for years.
—

Sea level rise could be faster, worse than expected: studies

More water you don’t want, less water that’s desperately needed – welcome to the whacky, unsettling world of human-caused climate change. As jurisdictions like California battle record-breaking drought, scientists are at the same time warning that sea levels could rise faster and higher than originally thought as our warming climate melts polar ice sheets. One particularly troubling study estimates that sea levels are set to rise a minimum of six metres even if greenhouse-gas emissions are reduced enough to keep average global warming below 2 degrees C.
—

Canada’s cleantech industry has doubled in size over the past eight years. Unfortunately, Canada’s global share of environmental goods is steadily declining, according to a report by Analytica Advisors. Canada’s market share of manufactured environmental goods declined 41 per cent from 2005-2013. Analytica president Céline Bak argues that the kind of strategic capital and private sector engagement that aerospace and other sectors have enjoyed is needed to keep pace with global competitors.
—

Jeff Rubin, former chief economist for CIBC World Markets, has published a new book on what comes after the Canadian hydrocarbon boom. Faced with high extraction costs, impending carbon regulations and declining demand for oil, Rubin predicts the rapid demise of the oil sands. But Rubin makes clear it’s not all doom and gloom for Canada. The carbon bubble might be bursting, but other opportunities – particularly agricultural ones – are opening up thanks to warmer temperatures.