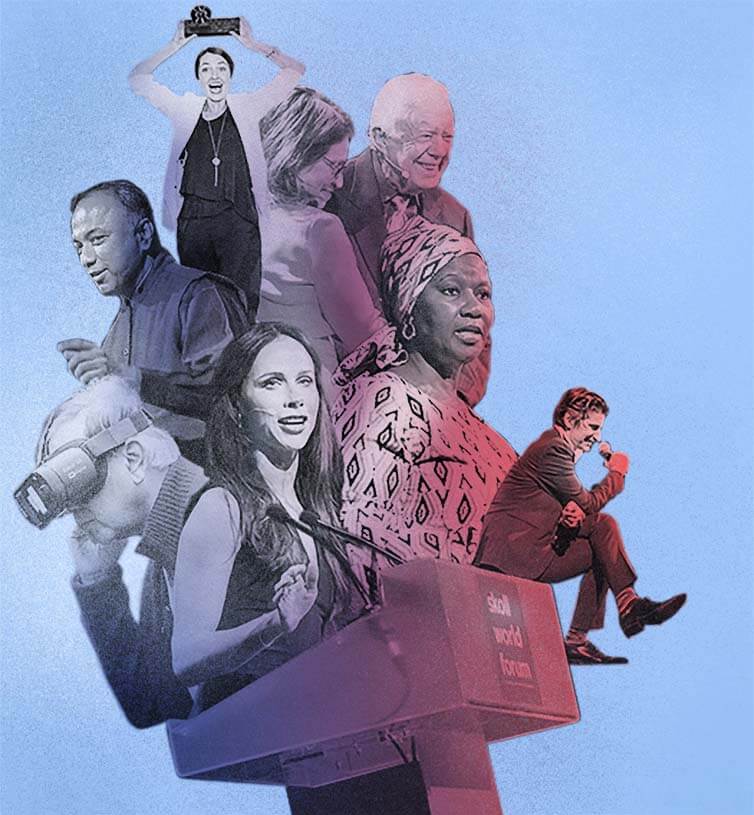 Whether they work in healthcare, education, justice or agricultural reform, social innovators savour Skoll World as an opportunity to reflect and recharge – especially in today’s era of me-first nationalism. To revive and refresh your own inner activist, here are seven takeaways from the 2018 Skoll World Forum:

1. The event began with a welcome from Skoll World cofounder Stephan Chambers to “entrepreneurs, artists, activists, investors, scholars, innovators and resistors.” He said, “You make so much that is warm, humane and inspiring… You are a barrier against disinformation, duplicity and destruction.” If nothing else, it’s clear the Trump presidency has given social entrepreneurs a new sense of purpose.

2. Every year, Skoll World presents its Global Treasure Award. Previous winners include Bono, Nelson Mandela and Pakistan’s Malala Yousafzai. This year’s winner was former U.S. president Jimmy Carter, 93, who’s been building homes with Habitat for Humanity while Donald Trump was licensing his name to shiny towers with gold bathroom fixtures. As president, Carter negotiated the 1979 Israel-Egypt peace treaty, and later founded the Carter Center to resolve conflicts, protect human rights and combat disease. (The centre targeted Guinea worm, a devastating tropical disease, when there were 3.5 million cases. Today, the caseload is down to five.)

Carter recalled that upon receiving the Nobel Peace Prize in 2002, he’d declared inequality of income the world’s biggest challenge. Today, he says, the issue is gender discrimination. He says the world is missing 160 million women – mainly due to prenatal screenings that encourage families to terminate pregnancies if they find it’s a girl. “I have pledged, for the rest of my life,” he said, “to devote my time to fighting for the equality of people on earth.”

Carter encouraged his audience to oppose today’s growing intolerance. “I think we have a great opportunity ahead of us, of excitement and purpose in life, as we reach out to people who are different from us and find out how wonderful they are and how much they can add to our own lives.”

Two years ago, Ngwenya was volunteering at a women’s shelter in Phoenix. He was cleaning a washroom when a client pounded on the door. She later explained she was in a rush because the shelter didn’t provide feminine hygiene products. So Ngwenya bought 40 pads at a dollar store to donate to the shelter. At his next shift, the woman smiled and said, “Something happened! They have feminine-hygiene products now.” Her positive response inspired Ngwenya to launch SWSL to distribute hygiene products to women’s organizations around Arizona. He also founded a chapter in Kampala, Uganda, to teach women in safe houses to make and sell their own feminine products.

“The fact that I listened to what someone else experienced helped me make this impact,” said Ngwenya. “If everyone in this world starts to care about things that don’t concern them, a lot of things are going to change.”

4. Through its theme, The Power of Proximity, Skoll World urged social entrepreneurs to rediscover their missions, their clients, and each other. The need is all around us, noted Bryan Stevenson, a Harvard-trained lawyer from Montgomery, Alabama. Stevenson founded the Equal Justice Initiative (EJI) to represent Alabama prisoners who’ve been denied a fair trial. The EJI also defends anyone facing the death penalty, as Alabama is the only state that denies legal assistance to prisoners on “death row.”

“It is in proximity to the poor, the excluded, the neglected, that we understand things we cannot understand from a distance,” Stevenson said. “Many of us have been taught that if there’s a bad part of town, you need to stay away. Many of us have been taught that if there are parts of the globe where there is conflict and suffering, you should stay far away… All of us need to get closer to the marginalized, the disabled, the disfavoured, the excluded and the incarcerated.”

5. The most harrowing story came during a panel session on the growing use of virtual reality (VR) to tell more compelling stories. One panellist, Raja Ebenezer of Chennai, India, revealed that as a child, he was enslaved along with his parents at a brick quarry after they failed to repay money they borrowed to fund their daughter’s wedding: “The loan was made to trap us in a system we couldn’t escape from.”

Ebenezer and his family worked 19 hours a day making and stacking bricks. Two years later, they and over 100 others were freed in a rescue organized by International Justice Mission (IJM), which protects the poor in the developing world from everyday violence. That includes 40 million people trapped in slavery, and millions more in sexual violence and sex trafficking.

Ebenezer, now a lawyer with IJM, worked with New York City filmmaker Lindsay Branham on a just-released VR experience called The Hidden, which documents the rescue of a family of 10 from a rock quarry where they’d been confined for a decade. IJM founder Gary Haugen hopes this immersive media project will help more people realize this issue is real. “Slavery sounds like a word from another century,” said Haugen. “With 360-degree virtual reality, you’re transported physically to this place that people try to keep hidden.”

7. Canada had a low profile at Skoll. The sole Canadian speaker I heard was Angela Code, a young filmmaker and human-rights advocate from Whitehorse, Yukon. As a member of Sayisi Dene First Nation, from Manitoba’s far north, Code grew up without running water and drove a dog team to school. “Our people are suffering and living in poverty,” she told a Skoll audience. “We have to work to establish our culture, because Canada has systematically repressed us.”

It was tough to hear Code call out Canada on a global stage. But this was a wakeup call. As Canadians promote social justice and human rights around the world, we still have work to do at home. Proximity starts chez nous.