Corporate Knights and As You Sow have released the annual Clean200 list of publicly traded companies that are leading the way with solutions for the transition to a clean-energy future.

Since our first report was launched in the summer of 2016, a great deal has changed in the world.

Larry Fink, the CEO of the largest investment firm in the world, BlackRock, wrote in his 2021 letter to CEOs:

“Given how central the energy transition will be to every company’s growth prospects, we are asking companies to disclose a plan for how their business model will be compatible with a net zero economy – that is, one where global warming is limited to well below 2°C, consistent with a global aspiration of net zero greenhouse gas emissions by 2050.”

Fink’s sentiment is playing out in real time. The negative impact of climate change across the entire economy, supply chains, capital markets and public health is now well charted, in particular the recent Harvard study showing that deaths related to fossil fuel pollution exceeded eight million in 2018 and are growing.

This year, riding Tesla’s soaring stock, Elon Musk passed Jeff Bezos to become the richest man on the planet, with a net worth of US$189.7 billion (as of January 8, 2021).

In carrying out his mission to accelerate the world’s transition to sustainable energy, Musk has become a prophet for clean capitalism, with Tesla now ranked as the most sustainable and valuable car company in the world. It is also now the pure-play company on the Clean200.

Musk is not alone. The Prince of Wales, the pope and, critically, a global movement catalyzed by Greta Thunberg have all turned up the heat on businesses to get real about cooling the planet.

Prince Charles has long championed the environment and the central role industry and finance must play in its protection, but he’s dialled up the urgency significantly in the past year. In the fall, he said climate change poses such a severe threat that the world’s only option is to adopt a military-style response reminiscent of the U.S. Marshall Plan that helped rebuild post-war Europe 70 years ago.

In January, the prince looked back more than 800 years to the Magna Carta (which inspired a belief in the fundamental rights of people) to issue a companion document – the Terra Carta, or Earth Charter – that aims to enshrine the rights and value of nature in capitalism, inviting the world’s CEOs to make a sustainable future the growth story of our time.

Pope Francis once described unbridled capitalism as the “dung of the devil.” In a sign of the times, he recently gave his blessing to the Council for Inclusive Capitalism, a partnership between the Vatican and the leaders of some of the world’s largest businesses, including the chiefs of BP and Bank of America.

There are now more than 300 companies, representing more than US$3.6 trillion in market cap, that have committed to a net-zero-emission target in line with a 1.5°C future.

Some worry these are empty words that give the impression that sufficient action is being taken – a sort of delay tactic. Thunberg, the teenage activist who kicked off a citizens’ climate movement, says, “We must forget about net-zero – we need real zero.”

She spells out what that means:

“Immediately halt all investments in fossil fuel exploration and extraction. Immediately end all fossil fuel subsidies. And immediately and completely divest from fossil fuels. We don’t want these things done by 2050, 2030 or even [next year]. We want this done now.”

She’s right, but defunding carbon bombs will not be enough; not even close. The real action is going all in on funding climate solutions. What gets funded gets done. How we invest our trillions starting right now will determine our future.

To paraphrase Indian philosopher Jiddu Krishnamurti, the climate-solution revolution is today, not tomorrow. The litmus test for companies and countries (and anyone, really) is what percentage of your current budget is allocated with an intention to create a carbon-free sustainable world. If it’s less than 100%, you’ve got work to do.

The Clean200 companies are leading the way by putting sustainability at the heart of their products, services, business models and investments, helping to move the world onto a more sustainable trajectory.

This year’s Clean200 companies rose to the top of a pool of 8,080 global firms that earn more than $1 billion a year, based on rigorous assessment of the amount of revenue each company earns from products and services aligned with the Corporate Knights Clean Economy Taxonomy, while also ensuring that their businesses are not fundamentally offside important criteria for socially responsible investors, including substantial involvement in weapons, private prisons, thermal coal or having a record of systemically obstructing climate policy.

On average, 39% of revenues earned by Clean200 companies are classified as clean, which the majority of other revenues classified as neutral, compared to just 8% clean revenue for their peers.

What is needed now is for the rest of the business world, most importantly the big-money investors who have been sitting on the sidelines, to also lean into this more civilized form of clean capitalism.

Now that BlackRock, the largest investor in the world, with a whopping US$8.7 trillion under management, has jumped the net-zero-emissions bandwagon, it is only a matter of time before it becomes the standard, placing a 100% sustainable and zero-carbon economy within our grasp.

The good news for our species is that the forces of pride and profit have shifted in favour of those on the right side of climate history, with shame and economic shambles awaiting those who cling to the wrong side.

With the sun shining on climate solutions, companies are free at last to shed their carbon cloaks.

With all this action, we hope that the Clean200 can do two things:

While we’re not promising any home runs, we are happy to report that the Clean200 now has more than a four-year track record of outperforming its high-carbon global counterparts. 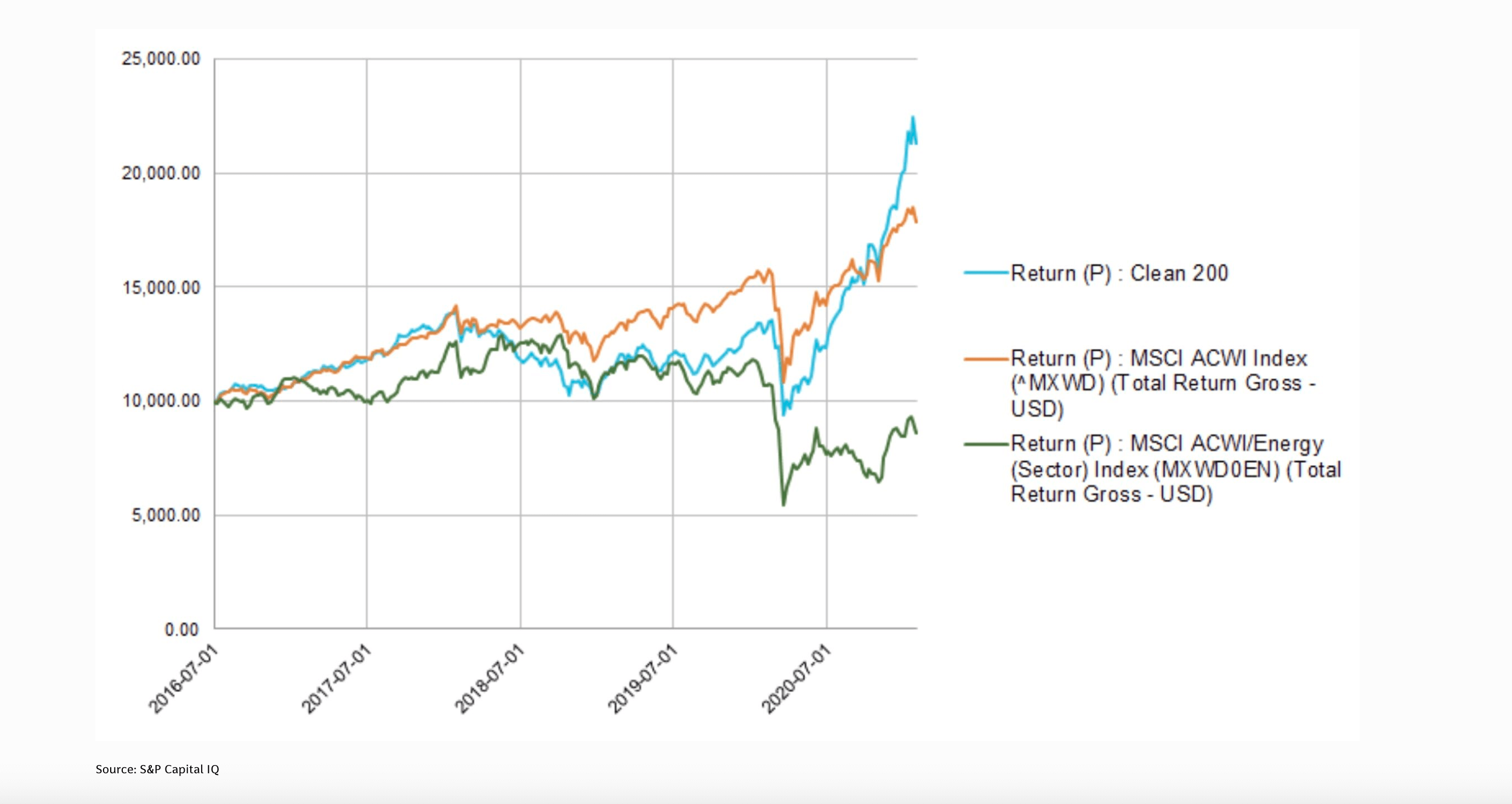 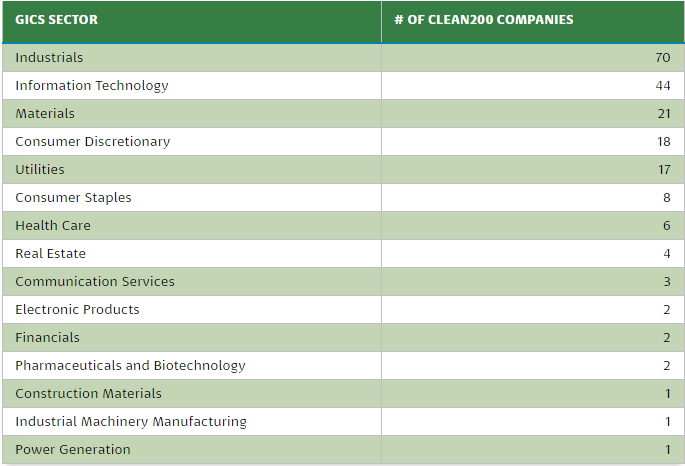 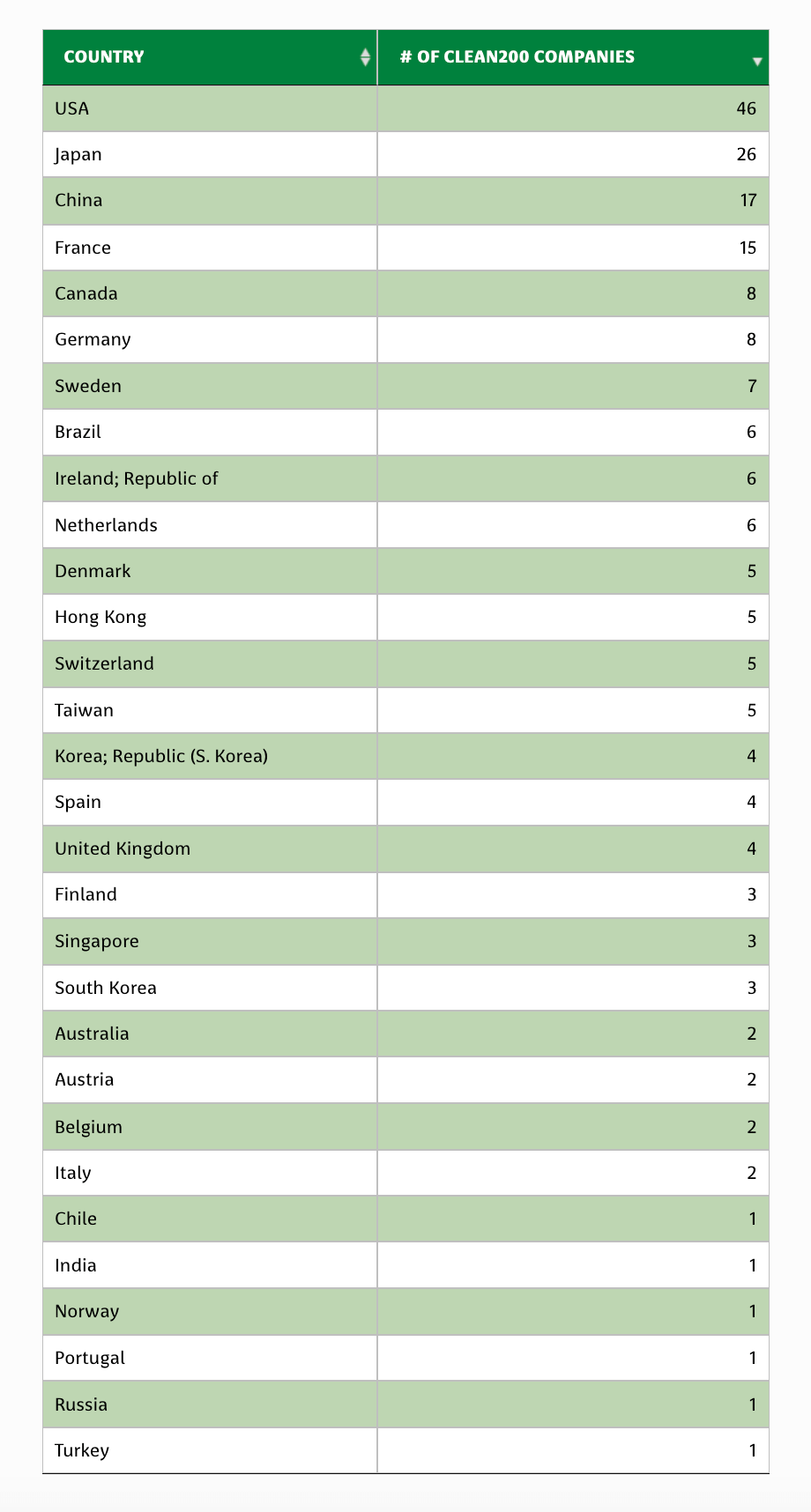 The Clean200 are the largest 200 public companies ranked by green energy revenues. It was first calculated on July 1, 2016, and publicly released on August 15, 2016, by Corporate Knights and As You Sow. The current list has been updated with data through the end of 2020 (December 31, 2020).

The Clean200 companies are listed by their estimated green revenues in USD. The dataset is developed by multiplying a company’s most recent year-end revenues by its clean revenue estimate, primarily sourced from Corporate Knights Research. In order to be eligible, a company must have USD revenue of at least $1 billion (most recent available fiscal year-end data) and earn more than 10% of total revenues from clean sources.

The Clean200 uses negative screens. It excludes all oil and gas companies and utilities that generate less than 50% of their power from green sources, the top 100 coal companies measured by reserves, the top 100 oil and gas companies as measured by reserves, as well as all fossil fuel companies, majority fossil-fired utilities, pipeline- and oilfield-services companies, and other fossil-fuel-related companies screened on As You Sow’s Fossil Free Funds. In addition, the Clean200 excludes weapons companies, including major military arms manufacturers found on the SIPRI Top 100 arms-producing and military services list, as well as cluster munitions, nuclear weapons and civilian firearm manufacturers screened on As You Sow’s Weapon Free Funds. The Clean200 also excludes palm oil, paper/pulp, rubber, timber, beef and soy producers that are screened on As You Sow’s Deforestation Free Funds, companies using child or forced labour, and companies that engage in negative climate lobbying. The full list of exclusionary screens is provided below.

TOBY HEAPS is the chief executive officer and co-founder of Corporate Knights. He spearheaded the first global ranking of the world’s 100 most sustainable corporations in 2005 and in 2007 coined the term “clean capitalism.” He sits on the Ashoka Canada Board and the University of Toronto’s Environment and Finance Committee. Toby has been published in the Financial Times, The Wall Street Journal and The Globe and Mail. In 1998, he played centre field for the Yugoslav National Baseball Team.

ANDREW BEHAR is the CEO of As You Sow. Previously, Andrew founded a cleantech start-up developing innovative fuel-cell technologies for grid-scale energy storage. He recently termed off the board of the US Forum for Sustainable and Responsible Investment (US-SIF), he is on the advisory boards of Real Impact Tracker and 1-Earth Institute. His book, The Shareholder Action Guide: Unleash Your Hidden Powers to Hold Corporations Accountable, was published in November 2016 by Berrett-Koehler.

ABOUT AS YOU SOW®: Founded in 1992, As You Sow promotes environmental and social corporate responsibility through shareholder advocacy, coalition building and innovative legal strategies. Our efforts create large-scale systemic change by establishing sustainable and equitable corporate practices. As You Sow was founded on the belief that many environmental and human rights issues can be resolved by increased corporate responsibility. As investor representatives, we communicate directly with corporate executives to collaboratively develop and implement business models that reduce risk, benefit brand reputation and protect long-term shareholder value while simultaneously bringing about positive change for the environment and human rights.