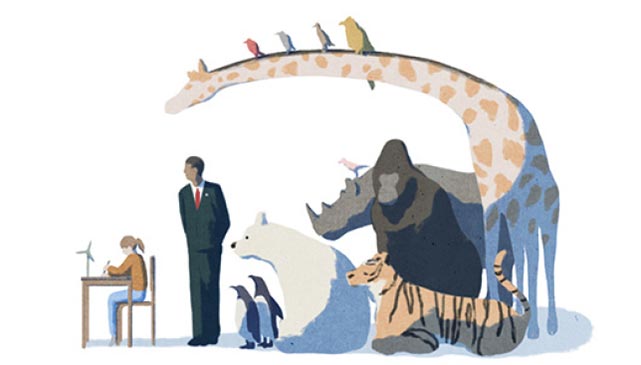 Ruffling some Republican feathers, the White House announced plans to distribute science-based literature and launch learning programs in an effort to educate students, teachers and the broader public about climate change.

“Through the Climate Education and Literacy Initiative, the Obama Adminis­tration is asking leaders across sectors to step up and help lift our Nation’s game in climate education,” according to a White House briefing document.

“Continued progress into the future will depend on ensuring a climate-smart citizenry and a next-generation American workforce of city planners, community leaders, engineers, and entrepreneurs who understand the urgent climate-change challenge and are equipped with the knowledge, skills, and training to seek and implement solutions.”

The initiative pulls together more than two-dozen advocacy and education groups from more than 30 states, and will involve the creation of fellowships, training programs and public education campaigns through museums, aquari­ums, botanic gardens and zoos.

Digital games will be part of the effort. The National Oceanic and Atmospheric Administration is expected to work with other science agencies to develop educational games and interac­tive media. This will include a competi­tion in 2015 that will bring together game developers, scientists and educa­tors. The goal is to develop prototype games that teachers and students can use in classrooms.

The education announcement came on the heels of a U.S.-China climate deal and a United Nations “Deep Decarbon­ization Pathways” report, which con­cluded it is technically feasible for the U.S. to reduce its greenhouse-gas emis­sions to 80 per cent below 1990 levels by 2050. Multiple pathways are available, the report concluded, and the cost of such an effort would be equivalent to 1 per cent of U.S. GDP.