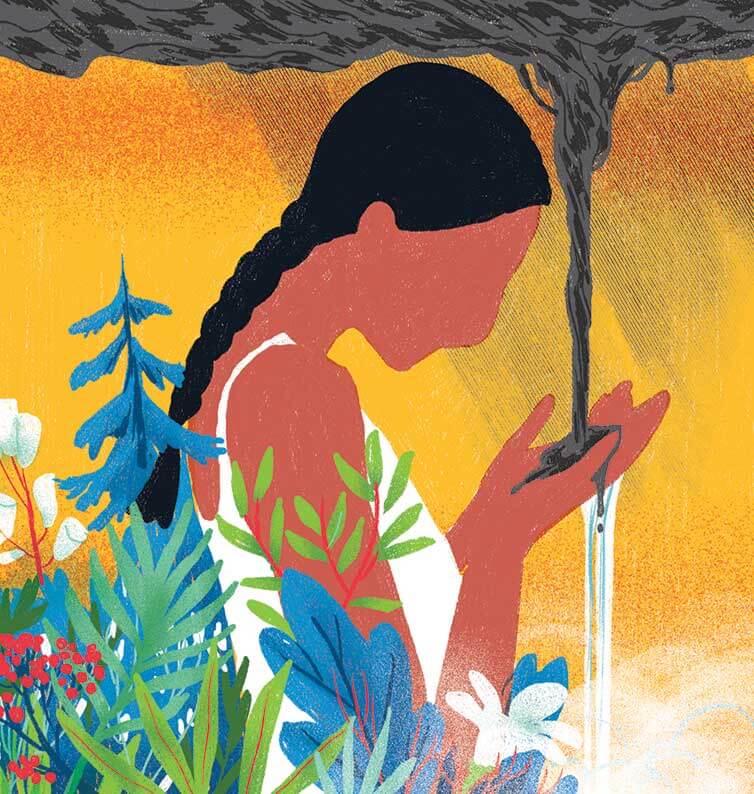 This is particularly true when it comes to the country’s indigenous population.

Small but admirable attempts to decolonize our collective history have emerged in places like Vancouver, which has branded its anniversary events “150+” as an acknowledgement of the time before settler contact. Visitors have flooded in to see Cree artist Kent Monkman’s art series “Shame and Prejudice: A Story of Resilience” as it travels across the country. The exhibit showcases a collection of his paintings, which use the aesthetics of traditional Western neo-classicism to challenge the Euro-centric narrative of Canada’s colonial past and to confront the impact of this colonial story on Canada’s indigenous peoples.

At Corporate Knights we wanted to use the anniversary to reflect on how nature shaped and continues to shape European-led settlement of Canada, and vice versa. Author Chris Turner delves deep into these issues here, highlighting the dissonance behind Canada’s professed love of nature with the extractive industries that built and continue to shape it.

A corollary of this investigation is what impact Canada’s indigenous peoples have had in directing this relationship between resource development and nature, and the lives changed as a result.

There’s little doubt that aboriginal peoples living across what would become Canada – a collection of groups encompassing myriad languages and landscapes – each developed forms of subsistence living over thousands of years that were unique to each local environment. The land was often modified and manipulated to meet their needs, but in a way that was broadly self-sustaining.

European settlers came to this land with a different vision in mind, principally motivated by the allure of natural resources on offer. This wasn’t entirely one-sided, as aboriginal people became an integral part of the burgeoning fur trade. But it ended up transforming both the state of the natural environment and their relationship to it.

As settler populations multiplied and moved west into the 18th and 19th centuries, their supposed need to displace the inhabitants grew more acute. Primary industries that fuelled the growth of modern cities like fishing and logging were not simply happened upon, but were wrestled away from local populations whose lifestyles and cultures were deeply intertwined with them.

Anthropologist Joanne Hammond and others have taken to photoshopping B.C.’s historical signs as part of an imaginary Department of Uncolonial History. One series focuses on B.C.’s salmon fisheries, where commercial canneries in the 1870s displaced indigenous fisheries reliant on sustainable practices honed over millennia. Indigenous peoples were banned from commercial fishing and further exploited in their factories while stocks were nearly destroyed through overfishing.

As Turner outlines in his piece, Canada’s first national parks like Banff were not purely born out of an early desire to protect the natural environment but also as a continued source of resource development. But developing the park itself required the exclusion of the Nakota First Nation from its traditional resource-gathering territories.

At the same time, environmental historian Nancy Langston has warned, embracing a declensionist narrative also has its dangers. “Nature and aboriginal peoples alike come across as victims with minimal agency”… nor does it “engage with enviro-technical change, the history of science, gender or the nuances of aboriginal history and power.”

To take this a step further, author John Ralston Saul argued in his book A Fair Country that Canada is a Métis nation that has been heavily influenced by aboriginal ideas. Perhaps Canada’s relationship to its natural environment, as outlined by Turner, has been more influenced by its first permanent inhabitants than we think.

Environmental history is a burgeoning field, especially when it comes to assessing indigenous people’s place in it. It’s a subject we plan to revisit later this year.