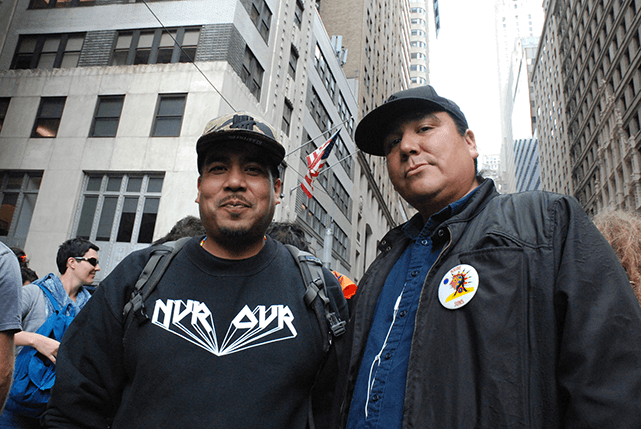 Activists are flooding Wall Street today to remind investors that the risks of climate change are real and the movement to protect the planet is growing stronger.

The mass protest comes one day after an estimated 400,000 people marched through Manhattan in New York City to demand that world leaders at tomorrow’s United Nation Climate Summit create a binding agreement to stop climate change.

While indigenous communities have been at the forefront of the climate movement since the beginning, this weekend’s protests placed the spotlight firmly on indigenous peoples and people of colour as the leaders of the movement.

While it may seem like yesterday’s march should be enough to get the point across that climate change is a serious issue, Flood Wall Street is attempting to literally disrupt business as usual and send a message to investors that their actions matter.

Accompanied by a several helicopters and a large contingent of police officers, thousands of protesters began moving from Battery Park at the lower tip of Manhattan towards Wall Street around 11:30 yesterday morning, eventually settling around the iconic bull statue in the heart of the financial district.

Ta’Kaya Blaney, a 13-year-old activist and singer from the Sliammon First Nations group in British Columbia, said she was risking arrest by sitting in the middle of Wall Street because she wants to demonstrate how to bring attention to the corruption and ongoing injustice within the economy.

Activists are using Flood Wall Street as an opportunity to popularize the conversation about how capitalism and climate change are related, says Clayton Thomas-Muller, an indigenous activist with Idle No More and Defenders of the Land. He says they are also attempting to send a message that if world leaders are not going to create legally binding mechanism with clear timeframes, then the people will.

The Peoples Climate March yesterday was led by a large contingent of indigenous peoples and people of colour. Indigenous groups have always been at the forefront of the climate movement through their fight to protect their land rights. But yesterday’s march showed that people are starting to realize that indigenous people are not merely involved, they are leading the way, says Thomas-Muller.

Indigenous communities have constitutionally protected rights in Canada, which is one areas of law where Prime Minister Stephen Harper has not been able to stack the cards in favour of the oil and gas industry, he said.

Other groups are now more dependent than ever on the leadership of indigenous groups to shut down the oil sands, he added.

“As hard as the struggle to adjust capitalist society may be, we will be on the right side of history because we voiced the truth. It’s not our truth, it’s the truth,” says Blaney.