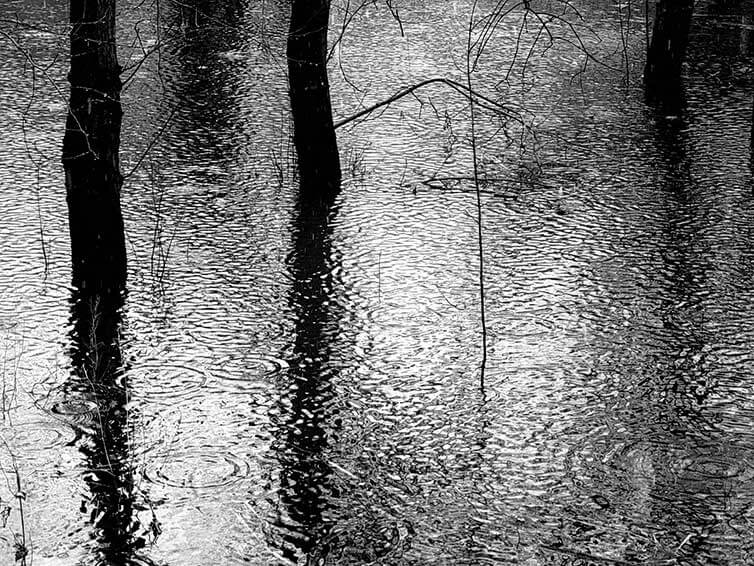 Just 26 years old at the time, Adèle Hurley teamed up with fellow Canadian Michael Perley to help found the CCAR and act as its chief lobbyists and executive co-ordinators. Starting out with 12 core organizations, the group eventually encompassed 58 member groups representing over two million Canadians. It was also one of the first times that Canadians had set up a public advocacy campaign in Washington, D.C.

With the passage of amendments to the U.S. Clean Air Act in November 1990, the establishment of the Acid Rain Program and commensurate regulatory action on the Canadian side, the group was disbanded. Since then, Hurley has been heavily involved in a variety of cross-border air and water issues. She has served as the Canadian co-chair of the International Joint Commission which oversees the Boundary Waters Treaty of 1909 between Canada and the United States, as well as the director of the Program on Water Issues at the Munk School of Global Affairs at the University of Toronto.

She was awarded the 2017 Corporate Knights Award of Distinction in June for her tireless efforts to protect Canada’s natural resources. She recently sat down with our editorial team to reflect on the acid rain years and the CCAR’s legacy.

CK: How did your involvement in the CCAR first come about?

Hurley: I was working at the time in the Ontario legislature as a researcher, and went specifically to hear a presentation about acid rain by Dr. Harold Harvey out of the University of Toronto. A few professors like Dr. Harvey and Dr. David Schindler were trying hard to convince politicians, even in the early days, and journalists that something was amiss in the lakes.

Harvey was showing the research that he and his graduate students had assembled from Killarney (on the shore of Georgian Bay in Ontario), using secchi disk readings and acidity data. He explained to the committee how stories about people catching huge fish on lakes in the area were painting a false sense of security. That what you really wanted to find was the young-year classes of fish, because the fear was that those newly hatched fish were being killed off by the acidic runoff in the spring. Fish from those young-year classes were going missing and, as Dr. Harvey explained, those older, larger fish you were seeing were actually slowly “marching off into extinction.” That phrase caught in my mind.

CK: There’s something so vivid about the threat posed by acid rain.

Hurley: A great quote came years later from Margaret Atwood, when she was asked by some Americans why Canadians were so up in arms about that acid rain problem. And she said, in her droll way, “It’s the cottage.” Well, what does that mean? “The cottage is childhood,” she said.

Cottagers became incredibly important for this issue over time, in terms of helping to mobilize support but also in terms of fundraising. Many of the cottagers were Bay Street by day and cottagers in the summer. I don’t think many people grasped that for many years. This was crucial because if you were going to comply with foreign agent legislation in the U.S., we couldn’t have government funds. Private fundraising was paramount for a Canadian non-profit operating without any government support in the U.S.

CK: How did CCAR navigate within the ecosystem of interests and power centres that were ultimately pivotal in successfully combating the acid rain threat? 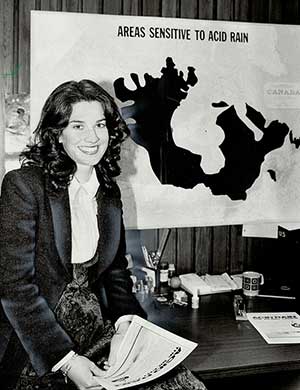 A photo of Adèle Hurley from October 1981 as she worked to set up operations at the CCAR. Photo by Colin McConnell for the Toronto Star

Hurley: From the outset, Michael and I and our board pretty much agreed on what we thought would be the important components involved in the set-up and operation of this campaign.

The first was the decision to form a coalition. This was critical, as it contained varied strengths that you could pivot and draw on at any given time. You could pull in tourism outfitters at certain points, forestry people, environmentalists, health experts, First Nations, cottagers, etc.

Sometimes we’d say that you’re better being your own mug, as the saying goes. Today we should speak as a coalition, or maybe we’ll put these three organizations together for their own statement. If it was a situation involving Quebec, Acadia or New England it would be our Quebec members talking to one another, and Michael would handle that completely in French. It gave us the ability to leverage that continental reach into Washington, Ottawa and Quebec media all at the same time.

Another pillar was not presenting ourselves as Canadians. I don’t mean that we were hiding this fact, but we simply appeared before Americans with the understanding that our meeting time was about enlightened self-interest. So if you’re from Pennsylvania, that’s all we’re talking about. And not the state in general, but your district in particular.

We also studied Congress extensively. We knew which votes we’d always have and could bank on – all we did was provide them with the most up-to-date science. There were also the ones we’d probably never get, and we tried to be respectful and not spend a lot of time on that. Most of all, we focused on the swing votes, and worried about the ones that might walk.

CK: How were duties split between you and Michael Perley?

Hurley: Our roles seemed to evolve quite naturally. I tended to focus on the overall strategic direction, after which Michael would fill in the necessary research details and take the lead on communications.

He’s a very organized speaker. He thinks before he speaks, and would always lay out our core message in quick bullet points at the top of any appearance. When you’re on an issue for that many years, the media comes to have a certain expectation, and even joy, if this was going to be the person explaining the latest development on the Hill or at a bilateral meeting. So he built up a following, because he managed to establish firm credibility in the eyes of the media. Excellent writer, articulate, no cheap shots, a little bit of light humour from time to time, but mostly just the facts.

That left me time to be on the Hill doing office meetings, sitting down with U.S. NGOs, reading the congressional record and publications like Business and National Affairs because every morning the information poured in. I’d go to committee hearings during the day, but the best time to work with the staff was around 6 p.m., when members of Congress were off on the cocktail and fundraising circuit and staffers were preparing for the following day.

That’s where we formed relationships with people who eventually started to count on us for the latest updates regarding their district. Obviously they’d fact-check it but after six years, if you hadn’t been making any mistakes, they were waiting. That’s why the congressional system needs to be monitored so carefully, because it really is open. Votes can flip pretty quickly.

CK: What were some unconventional strategies employed by the CCAR?

Hurley: One example of this was we put together a group toward the mid-to-latter years called the American Friends of Muskoka. It became essential because we saw the importance of the delegations from the Midwest. Many of the American Friends of Muskoka were influential senior Republicans from that region, who found themselves downwind in the summer from their own emissions back home.

American cottagers were writing to one another on the lakes in the summer, bringing each other up to date on the science and on the politics of acid rain in both countries. Several were CEOs and leaders of multinational companies, including heavy industry. At one point they convened a lovely summer cocktail reception, and invited the secretary of transportation in the Reagan administration to come and deliver remarks while he was in Canada fishing.

Very convivial, antique boats and people enjoying themselves, but a strong message was being sent directly to U.S. Midwest congressional leaders and Washington that this was important and not solely a Canadian or New England issue.

CK: Federal Green Party leader Elizabeth May has argued that Canadian government leadership and civil society engagement has never occurred as successfully as it did in that era.

Hurley: It certainly became a successful continental collaboration over time.  Interestingly, a level of difficulty occurred once it was Canada’s turn to clean up. After all the work we did in the U.S., it turned out that Ontario Hydro was one of the toughest emission control orders to nail down.

After many years of Canadians having had their noses pressed to the glass, furtively following what was going on in the U.S. it was time for us to clean up our contribution to acid rain in our own country. I recall that we weren’t very popular in some quarters at the time. It sometimes felt like we were handing out detentions.

Eventually, Canada’s approximately 50 per cent contribution to emissions that were causing acid rain in this country were brought under control and, together with the U.S. emission reductions, have protected moderately sensitive regions of this country.

On November 19, 1990, the CCAR happily threw a farewell party at Casa Loma in Toronto. Hundreds of supporters turned up and were charged admission because, as the invitation said, “We got smart but we never got rich.”