For the first time in its history Ontario Power Generation is preparing bids as part of the province’s next round of competitive procurement for renewable energy. And in another first, its foray into the world of competitive bidding will start with three solar power projects totaling up to 120 megawatts, Corporate Knights has learned.

Another 40 megawatts is planned for the Lennox Generating Station, a still-operating facility in Greater Napanee that’s designed to burn either natural gas or oil.

“We’re new in the world of solar,” said OPG spokesman Neal Kelly. “But what I would say is that we bring a lot of expertise in project management with a proven track record.” He pointed to recent hydroelectric projects, such as the Lower Mattagami project, which the company delivered on time and on budget.

While also new to competitive bidding, Kelly said OPG plans to “put our best foot forward” and see how the process plays out. “We’ll compete as everybody else does.” 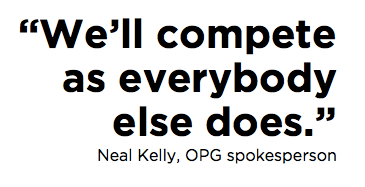 The Nanticoke plant, which discontinued operation in 2013, was capable of generating nearly 4,000 megawatts of power and was considered the largest coal-fired power facility in North America. Lambton, about half the size of Nanticoke, was taken out of service the same year.

OPG, a publicly owned crown corporation, has historically been held back from bidding on renewable energy projects, given that its sheer size and influence were seen as unfair advantages in a competitive, open market procurement process. The company supplies roughly half of the province’s power, mostly through nuclear and large hydroelectric facilities.

In June 2013, however, the Ontario government restructured its feed-in-tariff program such that only smaller renewable-energy projects could participate. Larger project proposals, those generally more than 500 kilowatts in size, would need to compete through a request-for-proposal (RFP) process.

And in a controversial twist, Energy Minister Bob Chiarelli directed the Ontario Power Authority to allow OPG to participate in all renewable energy procurement rounds. The latest round will include solar for the first time, and – whether OPG is successful or not – will finally give ratepayers a chance to see just how far solar prices have dropped in the Ontario context and without a local content rule keeping costs artificially high.

But David Butters, president of the Association of Power Producers of Ontario, did say the procurement process laid out by the government has specific rules that ensure OPG doesn’t have an unfair competitive advantage over smaller, independent power producers. The association, he added, is “focused on a successful procurement, not who wins or loses.” If OPG does manage to win, it will show that they are competitive and have good locations to develop, he said.

For its three proposed solar projects, OPG plans to use land it currently owns and lease adjacent property where necessary. At both Nanticoke and Lambton, projects would partially cover areas once used to store massive piles of coal.

The province’s Independent Electricity System Operator is expected to award large renewable contracts by the end of 2015. If OPG is successful, it plans to begin construction in 2016 with an aim to have all three projects operational in the 2018-2019 timeframe.

“We’re excited to be part of this process,” said Kelly. “We’ll learn many things as we go.”

He emphasized that it’s “early days” and community consultations have just started. He also didn’t rule out future projects down the road, pointing out that OPG owns several parcels of land throughout the province – from Kenora to Cornwall and from Bruce County to the Niagara Region.

“We have footprints in many, many communities,” he said.