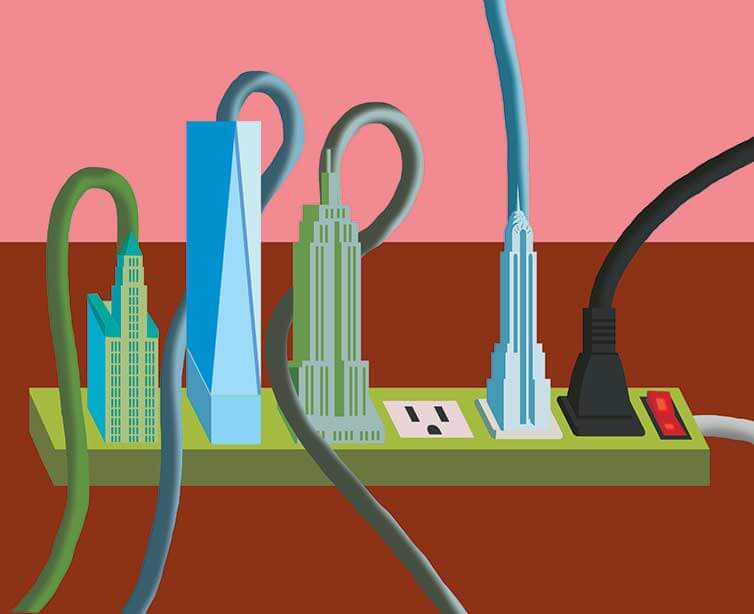 At the end of 2016, the Norwegian state-owned oil company Statoil put in a record bid for the rights to build a U.S. offshore wind farm off the coast of New York at $42 million (U.S.). A few months later, New York announced a $2,000 rebate for zero-emissions and plug-in electric vehicles. Shortly after the EV announcement, Syracuse, in upstate New York, was one of 11 winners that received $1 million from the state to plan a community microgrid that will encompass first responders, schools, homes, businesses and a nursing home.

These three news snippets may seem to have little in common except they all came from the Empire State. But in New York, the connection is broader and stronger. From huge renewable infrastructure projects to rethinking how consumers use energy at every level, New York is in the midst of arguably the most proactive and comprehensive electric system overhaul happening anywhere in the U.S.

New York does not have the proliferation of distributed solar PV of California or Hawaii, so energy reform does not have to be reactionary. New York is also not Germany, where some traditional power generators have been pushed to the brink of financial ruin as clean energy receives preference over fossil fuels.

New York, however, is grappling with the same issues unfolding across the globe: a power grid not built for two-way power flows, a grid that is getting more expensive to maintain and a grid that cannot quickly adopt new technology. Furthermore, New Yorkers and their grid have been battered by increasingly powerful storms, from Hurricane Irene to Superstorm Sandy.

“The grid we have today is the grid of [Nikola] Tesla and [George] Westinghouse. It looks like a mainframe,” says Richard Kauffman, New York State’s chairman of energy and finance. “We want a grid that looks like the IT system of today.”

It is not just the grid itself that is outdated. The power companies have long been incentivized to spend money on infrastructure, such as transformers and substations, to earn a regulated rate of return.

To meet the modern consumer’s insatiable need for connectivity and comfort, power grids are largely overbuilt to meet a few days of high demand a year, even though electricity use today is flat overall. Additionally, most energy markets, as Germany has illustrated, are inadequately designed for a new mix of electricity sources that are more intermittent and more distributed.

To build that IT system, New York Governor Andrew Cuomo launched the Reforming the Energy Vision (REV) proceeding in April 2014 to transform a nearly 200-year-old industry and the regulation that oversees it.

“We have new technology we never dreamed of more than 100 years ago,” says Rory Christian, New York director of clean energy at Environmental Defense Fund (EDF). “Do you need to design and build the system the same way you have in the past?”

REV promises to build a cleaner, more resilient and more affordable electricity system for the future. Practically anything concerning energy efficiency, renewable energy, public finance for clean energy and utility reform sit under the broad umbrella that is REV.
There are a few goals driving the plan. One is the Clean Energy Standard, which calls for 50 per cent carbon-free electricity by 2030. The standard casts a wide net, with some nuclear power, large run-of-river hydro and out-of-state clean energy from adjacent areas all eligible. The state also has a goal of a 23 per cent reduction in building energy consumption from 2012 levels, and a 40 per cent reduction in greenhouse gas emissions from 1990.

And then there is the small matter of transforming today’s distribution utilities into “distributed platform providers” that will be compensated not just for installing more wires and substations, but for using the system more efficiently and providing new services to customers and third-party providers, such as solar developers.

“Every other type of business had to evolve to be more and more capital efficient,” says Kauffman, “but in the electric utility sector, because of the regulatory arrangement, it’s the other way around.”

Since its inception in 2014, REV has been moving at a breakneck speed compared to how regulators usually approach changes to utilities. New York now has the largest Green Bank in the U.S. that has committed more than $350 million to projects such as innovative energy efficiency financing and loans for community solar projects. The NY Green Bank is part of a larger $5 billion, 10-year investment to animate private markets for clean energy technologies and help the state meet its Clean Energy Standard.

Utilities are also preparing for a more market-driven future. While utilities and solar providers are at odds in other states, the tone is far more congenial in New York. “The utilities are coming at it with their set of priorities and our industry has our own needs and desires,” says Valessa Souter-Kline, policy coordinator for the New York Solar Energy Industries Association, which is actively involved in many REV stakeholder groups. “But generally, both sides are getting better at understanding each other.”

The investor-owned utilities in New York have also filed massive tomes that lay out the state of their systems and the changes that need to happen in the next five years to enable more distributed and intermittent power generation. For most of the utilities, the first step will be digital smart meters followed by advanced systems to gain better visibility into their distribution grids. Consolidated Edison, New York’s largest utility which serves New York City, is spending more than $1 billion on its advanced metering program.

The meters and the advanced management systems for the distribution grids will give utilities the information they need to increasingly move to more time-based and location-based pricing, rather than the flat rates most people and businesses pay today based on the volume of electricity they use.

The utilities handle massive amounts of data today, but it is nothing compared to what they will have to collect, analyse and share with customers in near real-time in upcoming years. “There is [a] step change in how much information we’re going to have,” Matt Ketschke, VP of distributed resource integration at Con Edison. “How [do] we push that to customers to use that and make use of that?”

Investing for the future

The billions being spent by New York utilities to lay the groundwork for the future energy system is just the tip of the iceberg. For instance, Southern California Edison, which already has smart meters and has made significant investments in integrating renewables, estimated it will require $1.4 to $2.5 billion from 2015 to 2020 to better integrate distributed energy resources such as rooftop solar, batteries and electric vehicles.

If all of the money being spent sounds like a lot, it is. The investments, however, should lower costs in the long haul for customers. The New York grid is sized to meet a few of the hottest days of summer, when air conditioning drives the system to its limits. But for about half of the year, that oversized capacity sits idle. New York regulators estimate the idle capacity costs $2 billion annually. Maintaining the New York power grid as it is has cost $17 billion in the past decade, but will nearly double to $30 billion in the coming decade if nothing changes.

“The system is energy and financially inefficient compared to other capital-intensive industries,” says Kauffman. “We think we can largely build the new system by getting more value out of what we spend on our energy bills.”

The utilities must continue to earn enough money in the traditional way while the new earnings mechanisms are piloted and tweaked. One way of doing that is for utilities to tap resources at the grid edge, but the utility can still earn a rate of return for investing in those resources.

For example, Con Edison has plans to defer a $1.2 billion substation with a mix of upgrades, energy efficiency, smart thermostats, energy storage and other technology in homes and businesses in certain neighbourhoods in Brooklyn and Queens. It begins in earnest this summer, but the utility is not waiting for results to do more projects like this. It has already filed for six more similar projects that in aggregate will be even bigger than the Brooklyn and Queens project.

Encouraging new markets has not been without strain. As New York regulators encouraged community solar projects, for instance, speculative projects flooded the interconnection queues, making it harder for well-vetted projects to move through quickly. New York fell out of the top 10 solar states in 2016, according to GTM Research, partially because of this logjam.

The regulators are also working through various phases of rethinking rate design, which makes it harder for developers to do the math on the payback for a 20-year project if the rates are going to evolve significantly in just the next decade.

“There’s a fair amount of stress on developers because of how many moving parts there are,” Souter-Kline says of the complexity of REV. “But everyone is cognizant of the need for some certainty.”

If New York is successful in bringing in a robust mix of small and large clean energy in a state with both rural and dense urban populations while modernizing utility business models and rates, it could send a signal that others can do it too. While New York is learning from many other places, Kauffman’s office is also taking meetings and fielding questions from Latin America, Europe and other states about its efforts.

“A successful implementation of REV will change how we as humanity interact with energy,” says EDF’s Christian. “The key thing is it’s going to take time. This is the long game.”