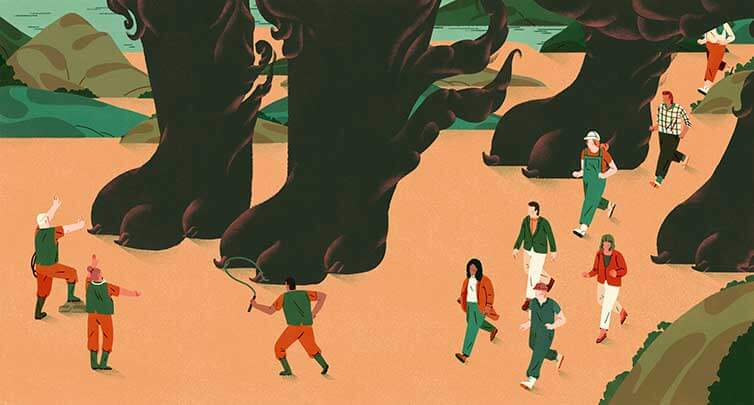 Carbon policy has a dose of competitiveness neurosis. This neurosis absolutely pervades the thinking behind climate inaction: for years, in Canada, concern over misaligned carbon costs with American and now Chinese competitors explained our go-slow approach. Why, it is reasoned, impose unilateral costs on Canadian producers that would only shift or leak production, jobs and emissions abroad?

But to date in Canada, widespread political panic has not set in. Instead, provinces and territories continue designing and implementing credible policy while a new federally led pan-Canadian framework will help coordinate the policy patchwork and guide long-term ambition.

So how did Canadian politicians, for the most part, become comfortable with imposing carbon costs on our large export engines? How has Canada managed to forge ahead on climate policy while other countries lag? The answer can be found in smart policy design oriented to reduce the impact on industry of increasing climate ambition. To some extent, Canadian politicians know they have already Trump-proofed their climate policy. How so?

First, successive prime ministers have used national targets to address competitiveness issues. Prime ministers Jean Chretien, in the case of the Kyoto Protocol, and Stephen Harper, in Copenhagen, reasoned that targets aligned with the United States would minimize the cost exposure on industry. In principle, target alignment made sense. But a closer look at the relative costs of emission reductions in Canada and the United States found that for the same target, Canada’s costs were much higher. This was primarily due to the low cost of decarbonizing coal-based electricity in the U.S. versus Canada’s largely decarbonized electricity system and high costs of reducing emissions in the oil sands. For the same targets, Canada’s carbon prices to reduce emissions are higher, thereby imposing higher costs on industry.

Second, governments have limited the cost exposure of carbon targets. Industry is rarely shy about sharing its views on the impact of high carbon costs, taking every opportunity to message that carbon costs equate to job losses. Adding to this insight is analysis and modelling that consistently reveals the high costs of politically ambitious GHG targets. Take the Harper government’s request to the now defunct National Round Table on the Environment and the Economy to cost out a 65 per cent reduction in GHGs. The $200 per tonne sticker shock landed with a thud in an era when few countries were pricing carbon.

To design around the cost uncertainty associated with ambitious emission targets, governments have put in place design features that effectively cap the cost exposure. Alberta’s large industrial emitter program, for example, now has a carbon price ceiling of $20 per tonne for industry, climbing to $30 next year. Alberta’s Climate Leadership Plan, which puts in place a comprehensive policy package, does not contain a GHG target, taking off the table the cost uncertainties associated with target attainment.

Ontario and Quebec’s cap and trade programs, through linked carbon trade with California, effectively contain costs by accessing a larger pool of lower cost reductions. Analysis that supported the design of Ontario’s cap and trade program, for example, found that linked allowance trade reduced the cost of Ontario achieving its climate targets alone from $157 per tonne of carbon dioxide to just $20 per tonne with linked carbon trade.

Third, federal governments have harmonized regulatory effort with the United States. Vehicle efficiency standards are now the same in Canada as they are in the U.S., recognizing the cross-border trade in automotive parts and vehicles. The latest attempt at regulatory alignment is on methane emissions for the oil and gas sector, with former President Barack Obama and Prime Minister Justin Trudeau (along with Mexico) agreeing to reduce this significant source of emissions. These policies are now at risk under a Trump administration.

Finally, governments are pricing only a portion of the emissions of our large and trade-exposed emitters such as cement, oil sands, and iron and steel. This approach, now applied in Alberta, Ontario and Quebec, starts with an economy-wide carbon price consistent across all emitters including households, but then provides the large trade-exposed industries with emission rebates. The carbon price sends a signal to manage carbon and make technology investments while the rebating lowers the overall cost impact. The rebating can be designed to work equally well under a cap and trade program or a carbon tax.

To understand how rebating works, think about the carbon price adder on the gasoline bought in a carbon pricing jurisdiction near you. The carbon price raises the price of fuel, which impacts behaviour to either drive less or get a more fuel-efficient vehicle. Governments then separately rebate households to offset the fuel cost impact. Taken together, the carbon price realigns price signals to use less fossil fuel while the rebate mutes the cost impact on household income. Alberta issues rebate cheques directly to households, alongside output-based subsidies for large industrial emitters, while in Ontario and Quebec, subsidies are available for low-emitting technology.

The impact on industry of carbon pricing paired with rebating is to significantly reduce costs. In Ontario, analysis supporting the cap and trade program found that the average cost impact on the large trade-exposed emitters in 2020, with a $20 carbon price, was a reduction in profits of approximately 1.5 per cent or equal to 0.12 per cent of sales. Some firms were better off, being able to outperform the requirements of the program and so increase profit through trading emission units.

While carbon policy costs are real, and every penny matters to shareholders, analysis suggests that carbon pricing paired with large emitter rebating can significantly reduce the competitiveness threat.

Which then highlights an important competitiveness dichotomy: while the competitiveness issue typically focuses on competitiveness lost, there is also the opportunity of competitiveness won. Competing in a carbon constrained world, as other countries increase their demand for low carbon goods, is the new prize. Canada is well suited to compete, with our carbon policies driving innovation and learning-by-doing. With America backing away from climate policy, Canadian innovators will be better placed to compete in the U.S. marketplace.

Governments intuitively know that competitiveness is an issue that must be addressed by carbon policy. For years, the sticker shock of carbon targets impeded action. But slowly, and in time, governments became more comfortable with imposing costs on Canada’s large export engines.  As the risk was better defined, and design choice identified that could minimize the impact, governments started to move.

Now with the imposition of a federal carbon price floor nationally, we can expect a more equal burden of costs across provincial emitters. Still, the next competitiveness challenge will be to better govern the patchwork of federal and provincial policies so that the long-term carbon costs can be minimized.

This is the next big challenge for the Canadian federation. Not “price carbon now,” but rather improve policy cohesion, better align regulatory burdens and routinely take stock to identify competitiveness risks as they manifest.

Ed note: A previous version of this article included British Columbia alongside Alberta, Ontario and Quebec as jurisdictions pricing only a portion of the emissions from their large and trade-exposed emitters such as cement, oil sands, and iron and steel. British Columbia is, in fact, the only Canadian jurisdiction without a rigorous policy for trade exposed industries.