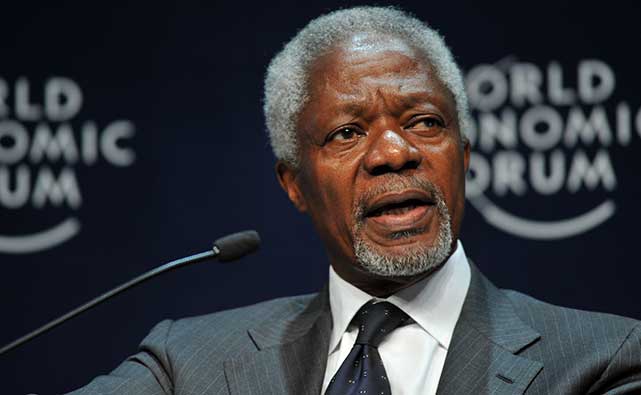 Nobel Peace Prize winner Kofi Annan relinquished his leadership of the United Nations in 2007, but his commitment to global change is stronger than ever.

The 76-year-old Annan, who was born into an aristocratic family in Kumasi, Ghana and began his four-decade career of service with the UN in Geneva, Switzerland while he was still in his 20s, today dedicates himself to helping lead major organizations that are addressing such global issues as sustainability and food security in Africa and beyond. As chairman of the Kofi Annan Foundation, set up in 2007, he “drives action towards a fairer, more secure world by promoting sustainable development, peace and security, and human rights.” Annan also sits on the boards of or otherwise supports numerous groups, including the Alliance for a Green Revolution in Africa (AGRA), for which he was the founding chairman; The Elders, a group of mature global leaders working to secure human rights; and the University of Ghana, where he is the chancellor.

We asked him about how the interrelated issues of food security, population growth, climate change and foreign policy are playing out in Africa, and what lessons learned there can teach us to prepare for the future.

Q: Why have you chosen to make food security such an important focus of your recent work, and what are the three most important things you hope to accomplish in regard to food security in the years to come?

Annan: When I was still UN secretary-general, I made the fight against hunger and malnutrition a priority of my work. I realized early on that the eradication of hunger is not just an end in itself: It is a first step toward sustainable development and progress in general, for a hungry man is not a free man. He cannot focus on anything else but securing his next meal.

In 2002, I commissioned the InterAcademy Council (IAC) [a global network of science academies] to put together a team of top scientists from around the world to assess why the Green Revolution of the 1960s and 1970s bypassed Africa. When I launched the report in Addis Ababa [Ethiopia] in 2004, together with the African Union, I called for a uniquely African Green Revolution to transform African agriculture and increase productivity to achieve a prosperous and food-secure Africa. This eventually formed the basis for the launch of AGRA.

The report, “Optimism for African Agriculture and Food Systems,” jointly released by the Kofi Annan Foundation and the African Union Commission, and with the support of the Bill & Melinda Gates Foundation, is clear: Africa has the potential not only to feed itself, but also to produce surpluses to help provide global food and nutrition security. 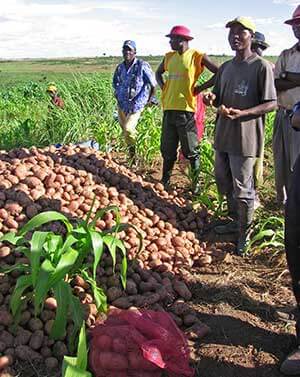 First, we have to put smallholder farmers at the center of all our efforts and enable them to increase their incomes, improve their livelihoods and lift themselves out of poverty.

Second, we need to promote visionary leadership for agriculture and food systems, and put in place the right policies and incentives to scale up investment—including through more private sector engagement—and amplify the positive transformations taking place.

Third, we have to understand that nutrition is critical for people’s health and development. We therefore must adopt policies that improve access to nutritious food, and promote healthy and sustainable diets, particularly for children and caregivers.

Q: Which recent African success stories are you most proud of in terms of a synergistic approach to addressing food security’s related issues?

Annan: African countries have started to adopt the right policies and are increasing their investment in agriculture, although the level of investment remains much lower than required. For example, Rwanda, Ethiopia, Ghana, Burkina Faso and most recently Nigeria have been successful in transforming agriculture and the agrifood sectors, and inspiring innovation across the entire value chain.

During my field visits with members of the AGRA board to Ghana, Mali and Tanzania, I experienced firsthand how changing policies can help provide opportunities for productive employment, income generation and a life of dignity. For example, farmers are now using their mobile phones to access timely information about prices and to take their products to the markets where they will get the best price.

Q: How can African nations and the world best support Africa’s young people in becoming part of the solution to greater food security?

Annan: One of the major challenges facing the African continent is providing opportunity and creating decent work for the growing population and its large percentage of young people—many of [whom] live in rural areas. African nations and their partners have to ensure that agriculture and food systems are treated as potentially profitable and viable business to become more appealing to young people.

It is particularly important to give young people adequate education and provide them with skills in entrepreneurship to enable them to fulfill their economic and social potential. Numerous opportunities in mechanized farming, food processing, transportation, marketing and other business sectors are emerging that need talent and skills to fill their ranks so that they can grow and expand to create meaningful employment for African youth.

Q: What kinds of technology advancements, such as genetic engineering, do you think can best help unlock Africa’s agricultural potential, particularly for smallholder farms?

Annan: The main technologies urgently needed to unlock Africa’s agricultural potential are related to the improvement of seed varieties, soil fertility enhancement practices and efficient use of water—both for rain-fed and irrigated methods of farming. On-farm adaptive research is much needed by African researchers, who could also benefit from external assistance.

Given that today Africa’s agricultural yields are less than half the global average, Africa can achieve significant progress through conventional breeding systems—without having to venture into genetic engineering, for which the required institutional, legal and regulatory capacities are nonexistent in the large majority of African countries.

Q: In your work with the Kofi Annan Foundation and The Elders, you have called for bold leadership to help achieve a carbon-neutral world by 2050. What kinds of new global climate change policies would best benefit African crop production?

Annan: The Intergovernmental Panel on Climate Change (IPCC) clearly says that climate change is a major threat to our global food supply system.

All countries have to adopt a robust, universal and legally binding agreement on climate change in 2015 to limit temperature rises to less than 2 degrees Celsius. Simultaneously, richer countries have to provide financial support for adaptation and diffusion of green technology. Climate-smart agriculture is a particularly promising pathway as it has the potential to allow smallholder farmers to increase farm productivity, strengthen resilience and reduce greenhouse gas emissions—for which urgent research efforts are needed, such as for developing drought- and flood-resistant crop varieties. We also have to improve land-use practices such as conservation agriculture and intercropping, and avoid deforestation through intensified production on existing land, to support both climate change adaptation and mitigation.

Q: What do you see as the best role for the developed world in transforming the availability and quality of food in Africa?

Annan: Africa is expected to become a major contributor to the global food supply system. It is therefore essential for the developed world to engage in the transformation of African agriculture and food systems, not just as a donor but more importantly as a viable business partner. This has to be done in a way that Africans are engaged throughout the value chain and are active participants and recipients of a fair share of the benefits.