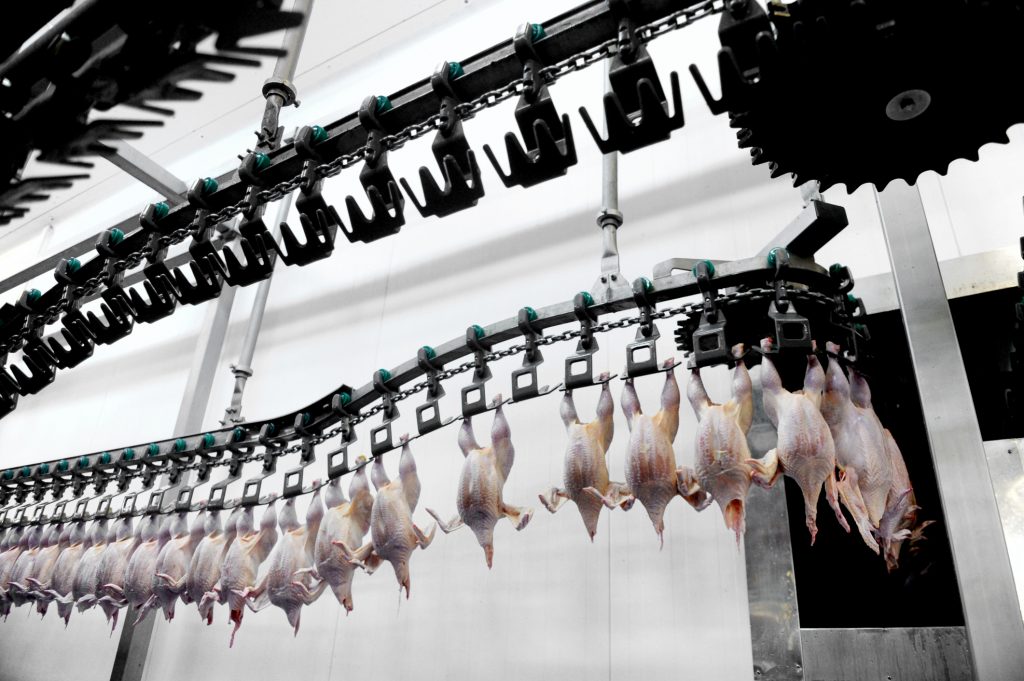 Philip Wollen was still an executive at Citibank when a visit to a client’s slaughterhouse three decades ago transformed his worldview. He became a global champion for animal justice, particularly after a speech he gave, “Should Animals Be Off the Menu?”, went viral. In light of the recent EAT-Lancet Commission report calling for a drastic reduction in meat eating, we’re sharing Wollen’s impassioned clarion call for a global shift to a plant-based diet.

King Lear, late at night on the cliffs, asks the blind Earl of Gloucester, “How do you see the world?”

And the blind man Gloucester replies, “I see it feelingly.”

Animals must be off the menu because they are screaming in terror in the slaughterhouse, in crates, and cages. Vile ignoble gulags of despair.

I heard the screams of my dying father as his body was ravaged by the cancer that killed him. And I realized I had heard these screams before.

In the slaughterhouse, eyes stabbed out and tendons slashed, on the cattle ships to the Middle East and the dying mother whale as a Japanese harpoon explodes in her brain as she calls out to her calf.

Their cries were the cries of my father. I discovered when we suffer, we suffer as equals.
And in their capacity to suffer, a dog is a pig is a bear … is a boy. Meat is the new asbestos – more murderous than tobacco.
CO2, methane and nitrous oxide from the livestock industry are killing our oceans with acidic, hypoxic dead zones.
Ninety per cent of small fish are ground into pellets to feed livestock.

The oceans are dying in our time. By 2048 all our fisheries will be dead. The lungs and the arteries of the earth.

Billions of bouncy little chicks are ground up alive simply because they are male.
Only 100 billion people have ever lived. Seven billion [are] alive today. And we torture and kill two billion animals every week.

Ten thousand entire species are wiped out every year because of the actions of one species.

We are now facing the sixth mass extinction in cosmological history. If any other organism did this, a biologist would call it a virus. It is a crime against humanity of unimaginable proportions.

The world has changed. Ten years ago Twitter was a bird sound, www was a stuck keyboard, Cloud was in the sky, 4G was a parking place, Google was a baby burp, Skype was a typo and Al Kider was my plumber.

Victor Hugo said, “There is nothing more powerful than an idea whose time has come.”
Animal rights is now the greatest social justice issue since the abolition of slavery.
There are over 600 million vegetarians in the world.

That is bigger than the U.S., England, France, Germany, Spain, Italy, Canada, Australia combined! If we were one nation, we would be bigger than the 27 countries in the European Union.

Despite this massive footprint, we are still drowned out by the raucous huntin’, shootin’, killin’ cartels who believe that violence is the answer – when it shouldn’t even be a question.

Meat is a killing industry – animals, us and our economies.

Medicare has already bankrupted the U.S. They will need $8 trillion invested in Treasury bills just to pay the interest. It has precisely zero.

They could shut every school, army, navy, air force, and marines, the FBI and CIA – and they still won’t be able to pay for it.
Cornell and Harvard say that the optimum amount of meat for a healthy diet is precisely ZERO.

Water is the new oil. Nations will soon be going to war for it. Underground aquifers that took millions of years to fill are running dry. It takes 50,000 litres of water to produce one kilo of beef.

If everyone ate a Western diet, we would need two planet earths to feed them. We only have one. And she is dying. Greenhouse gas from livestock is 50 per cent more than transport … planes, trains, trucks, cars and ships.

Poor countries sell their grain to the West while their own children starve in their arms. And we feed it to livestock. So we can eat a steak? Am I the only one who sees this as a crime? Every morsel of meat we eat is slapping the tear-stained face of a starving child. When I look into her eyes, should I be silent?

But it is not a rogue state. It is an industry.

The good news is we don’t have to bomb it. We can just stop buying it. George Bush was wrong. The Axis of Evil doesn’t run through Iraq, or Iran or North Korea. It runs through our dining tables. Weapons of Mass Destruction are our knives and forks. This is the Swiss Army knife of the future – it solves our environmental, water, health problems and ends cruelty forever. The Stone Age didn’t end because we ran out of stones. This cruel industry will end because we run out of excuses.
Meat is like one- and two-cent coins. It costs more to make than it is worth.

And farmers are the ones with the most to gain. Farming won’t end. It would boom. Only the product line would change. Farmers would make so much money they wouldn’t even bother counting it.Governments will love us. New industries would emerge and flourish. Health insurance premiums would plummet. Hospital waiting lists would disappear. Hell, “We’d be so healthy, we’d have to shoot someone just to start a cemetery!” …

Animals are not just other species. They are other nations. And we murder them at our peril.
The peace map is drawn on a menu. Peace is not just the absence of war. It is the presence of justice.

Justice must be blind to race, colour, religion or species. If she is not blind, she will be a weapon of terror. And there is unimaginable terror in those ghastly Guantanamos.

If slaughterhouses had glass walls, we wouldn’t need this [discussion].

I believe another world is possible. On a quiet night, I can hear her breathing.

Let’s get the animals off the menu and out of these torture chambers.

Please vote [with your diet] for those who have no voice.