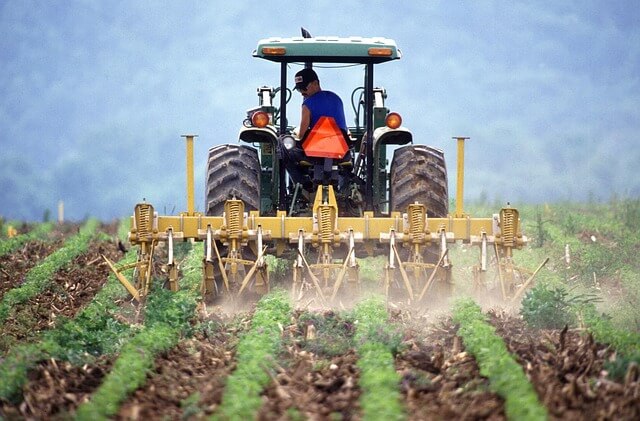 When an Iowa corn and soy farmer named Tim Richter took the stage at a big sustainability conference organized last fall by Walmart, he had a message for the crowd gathered to hear about the giant retailer’s sweeping efforts in food and agriculture: Sustainability makes business sense.

“I like to grow corn, and you can’t grow corn without fertilizer—especially nitrogen fertilizer,” says Richter, who farms about 7,000 acres of land. “But . . . in a leaky system of agriculture, what you don’t use becomes a pollutant.” Nitrogen not soaked up by crops can escape as a potent greenhouse gas, while runoff from excess fertilizer pollutes waterways and creates dead zones in the ocean.

Lately, though, Richter has been using an Internet-based tool called Adapt-N that relies on field-specific information and weather data to help corn farmers manage nitrogen use. The software, he says, helped reduce his fertilizer costs by as much as $150 an acre without hurting yields—huge savings for a farmer.

“It has totally changed the way we use nitrogen, how much we apply and when we do it,” says Richter. “If sustainability means becoming more efficient, count me in.”

That’s exactly the kind of response Walmart is looking for from its suppliers, says executive Kathleen McLaughlin, who oversees the company’s climate-smart agriculture program rolled out last fall as part of a broader effort to improve the food system in the United States and elsewhere. As Walmart’s senior vice president of sustainability and president of the Walmart Foundation (which helped fund development of Adapt-N), McLaughlin manages all of the corporation’s sustainability initiatives.

McLaughlin says Walmart’s climate-smart platform will be carried out in partnership with its suppliers, notably well-known food companies like General Mills and PepsiCo, which have promised to reduce their own climate impacts. The effort will work its way down their supply chains until the program reaches thousands of farmers around the world, like Tim Richter. If all goes according to plan, says McLaughlin, the reduced fertilizer use and optimized production of commodities throughout the vast Walmart supply chain will cumulatively eliminate about 11 million metric tons of greenhouse gas emissions by 2020. That’s the equivalent of taking about 2.3 million cars off the road for a year.

“It’s in our interests to provide our customers with sustainable food,” says McLaughlin, who joined Walmart 18 months ago after more than two decades at McKinsey & Co., a global management consulting firm. “And we want to do that in a way that’s going to secure that supply of food not just for this generation but for future generations of customers.”

Affordability has helped make Bentonville, Ark.-based Walmart the world’s largest retailer and grocer, with $473 billion in revenues last year, more than half of that from food. Now, with its climate-smart agriculture initiative, the company is aiming to lower what McLaughlin calls the “true cost of food . . . food that has a lower cost to the environment and to people.”

Achieving that goal is made easier by Walmart’s mammoth global presence and the accompanying value of its shelf space. Every major food company wants to have a good relationship with Walmart, and in 2014 Walmart was able to secure commitments from Campbell Soup, Cargill, Dairy Farmers of America, General Mills, Monsanto, Kellogg’s, PepsiCo and Unilever, among others, to measure and reduce usage of water and fertilizer in their supply chains. It wasn’t hard to persuade them to join in, says McLaughlin: Most food and beverage brands have made climate-related commitments of their own, and they face persistent pressure from nongovernmental organizations (NGOs) to do better.

McLaughlin says it’s up to each brand to track and report on its own progress. “They work with their suppliers and the farmers on the ground to track what’s happening on the acreage,” she says. Barley farmers in Idaho who supply MillerCoors, rice farmers around the world who supply Kellogg’s and growers who supply Campbell Soup with tomatoes and carrots will measure and then reduce their impacts, among them greenhouse gas emissions, water and fertilizer use. Walmart doesn’t offer any financial incentives for compliance; the assumption is that farmers and manufacturers will realize financial benefits of their own as they reduce inputs.

Walmart has also struck up a key partnership with United Suppliers, a network of more than 700 agricultural retailers in 20 states, which offers a program called Sustain. The retailers’ field staff are being trained to help farmers better manage and track their inputs, and United Suppliers has promised Walmart that it will reduce fertilizer on 10 million acres of cropland by 2020. That work alone would get Walmart nearly halfway to its emission reduction goal.

Meanwhile, Walmart has made its own commitments to buy commodities that are certified as sustainable by independent third parties. This effort began nearly a decade ago with seafood; today, more than 90 percent of Walmart’s fresh and frozen, wild and farmed seafood meets a standard. About 27 percent of the palm oil in its store-brand products is sustainably sourced, and the company recently joined an industry-nonprofit coalition to set standards for sustainable beef. The industry standards that have been developed for commodities like soy, palm, sugar and beef all take climate impacts into account.

Not everyone is cheering these efforts, however. As Walmart’s influence on agriculture grows, the company’s critics worry that the giant retailer will squeeze out smaller, family-owned farms, just as its retailing success often came at the expense of small-town, mom-and-pop stores. “Because of the volume they need, I fear they will drive out smaller [agricultural] producers,” says Danielle Nierenberg, president of Food Tank advocacy group.

But even though its climate-smart agriculture initiative takes on the often contentious issue of global warming, McLaughlin says Walmart hasn’t seen any backlash to its efforts from customers, suppliers or even politicians, and that the company is more determined than ever to go forward.

“We have very bold aspirations for systemic change,” she says. “We’re not playing small here. This is a whole company, a whole industry, a whole system effort.”