After the financial crisis of 2008/09, policy-makers were so intent on rebuilding their economies that sustainability considerations took a back seat. As the full economic impact of the COVID-19 crisis became apparent during the first half of 2020, there were fears that the same thing would happen this time.

But in fact, as Gilles Vermot Desroches, senior vice-president for sustainable development and strategy at this year’s most sustainable corporation, Schneider Electric, says, “the opposite is true.” Rather than abandon sustainability pledges, governments around the world have seized on the opportunity presented by the need to kick-start their economies to inject trillions of dollars of green investments into their stimulus plans.

The European Union, for example, has committed almost €550 billion to green projects over the next seven years, almost a third of its recovery package, while President Joe Biden has pledged to spend US$2 trillion on tackling climate change. There have also been notable commitments from China, Japan and South Korea to become net-zero economies, offering a clear sign of increased ambition in Asia that should transform the investment landscape in the region. 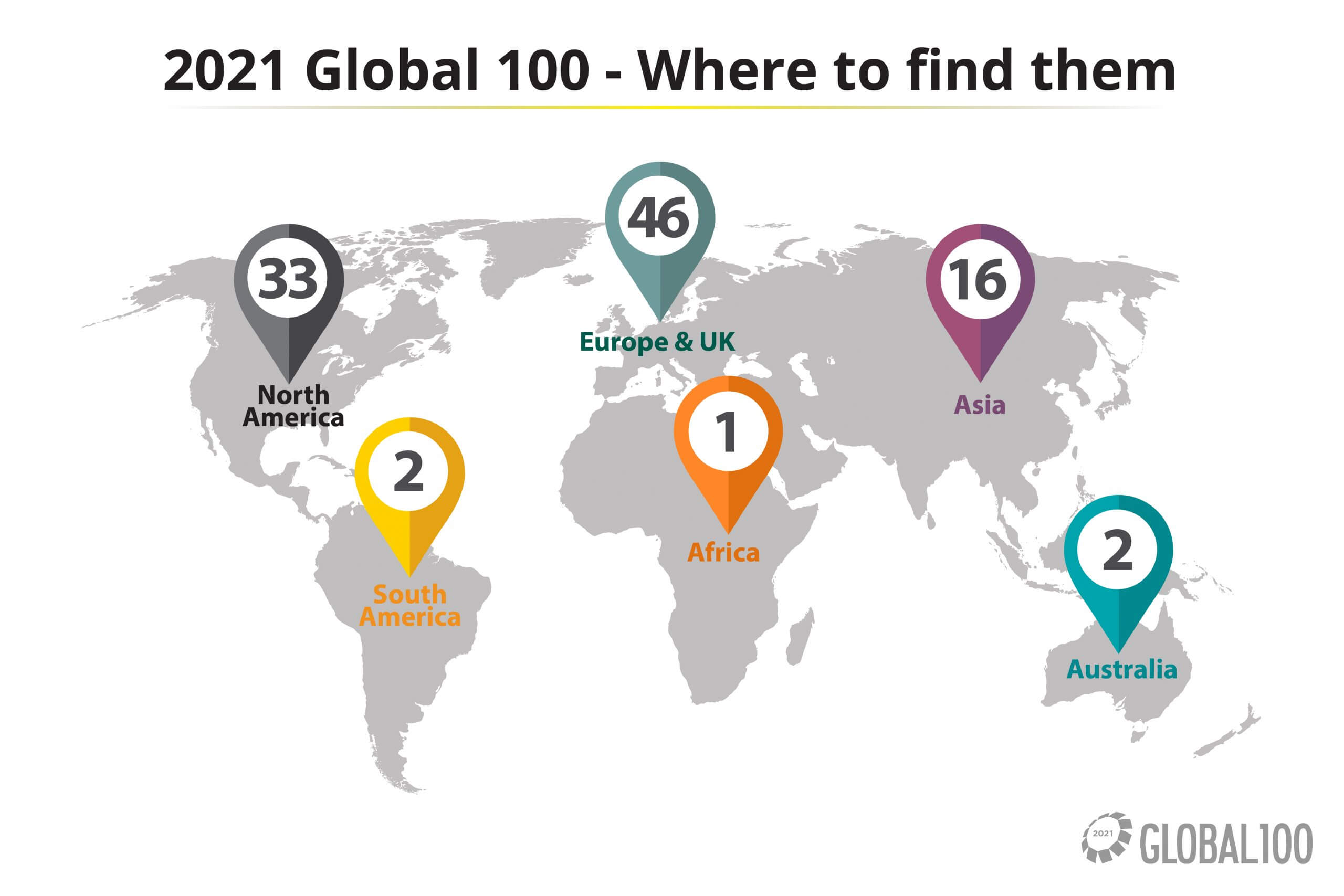 It’s not just national governments taking action; the number of companies and municipalities signing on to net-zero has more than doubled since last year. This year has also seen the launch of a $5-trillion Net Zero Asset Owner Alliance and a $9-trillion Net Zero Asset Managers initiative, whose members have committed to decarbonizing their portfolios in line with global efforts to limit warming to 1.5°C.

This shift in attitudes has come about in part because of the astonishing fall in the costs of renewable energy, which is now the cheapest source of new power in many parts of the world. From 2009 to 2019, the cost of solar fell 89%, as did batteries, while onshore wind is 70% cheaper.

With increasing evidence of the harm that climate change can cause, from devastating wildfires in Australia and California to heat waves in the Arctic, another driver is the growing concern from consumers and voters, epitomized by the school strikes for climate, inspired by Greta Thunberg, and the Extinction Rebellion movement.

At the same time, the Corporate Knights Global 100 index continues to demonstrate that sustainability is good business and enables companies to outperform their peers. 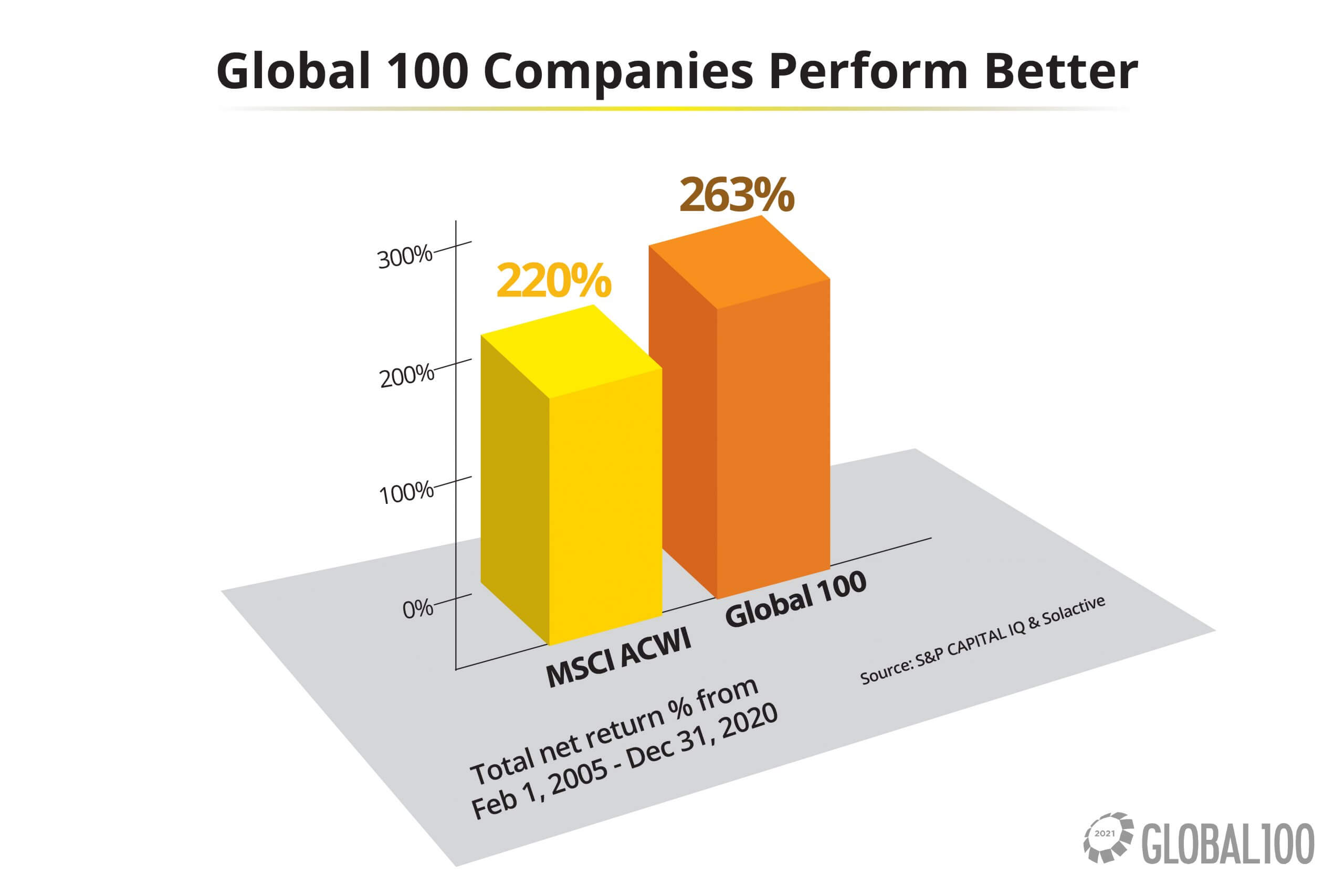 Members of the Global 100 earn 41% of their revenues from products or services aligned with the UN Sustainable Development Goals, according to the Corporate Knights Clean Taxonomy, compared to just 8% for MSCI ACWI companies on a weighted basis.

Global 100 companies are also more gender-diverse than their peers, with almost a third of board directors (32%) being non-male against 24% for MSCI ACWI companies.

Rising from 29th spot last year, Schneider Electric was one of several top 10 companies in this year’s index that jumped significantly from 2020. Last year’s winner, Ørsted, dropped one spot to No. 2, followed by Banco do Brasil (No. 9 last year); Finnish oil refiner Neste also dropped one place, to No. 4. American food company McCormick jumped from 22 to No. 6, while Canadian National Railway moved up to No. 10 from 54. 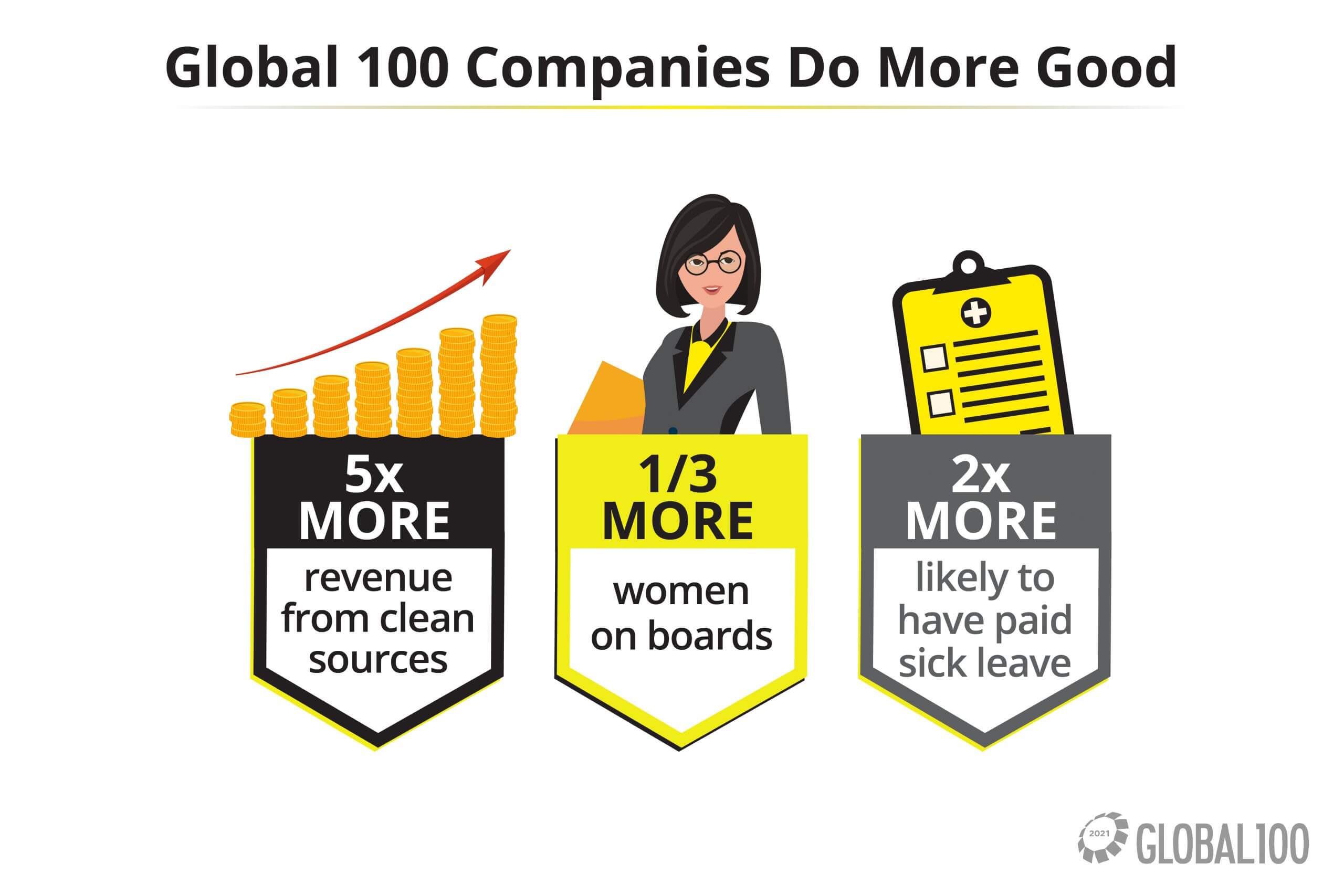 Highlighting the speed at which fortunes can change, 26 companies left the index, including Toyota, which was weighed down by its dependence on internal-combustion-engine vehicles, and chemicals giant BASF, flagged by U.K.-based InfluenceMap for lobbying against measures to combat climate change.

In a year dominated by the global pandemic, pharmaceutical group AstraZeneca, whose low-cost, easy-to-store COVID-19 vaccine could provide a real boost to efforts to conquer the virus, is a notable presence on the index.

There is also a growing number of Global 100 companies in the green building and real estate space, such as Owens Corning, Trane Technologies, Prologis and Singapore’s CapitaLand and City Developments. They complement the usual suspects in green infrastructure: along with Schneider, also represented are Siemens, Johnson Controls, Rexel, American Water Works and ABB.

Companies such as Ørsted, Iberdrola and Verbund demonstrate that green energy majors are becoming increasingly established in mainstream energy markets, particularly in Europe.

The presence of companies such as Quebec-based Cascades and Transcontinental and U.S.-headquartered Ball Corporation show that packaging is one of the first areas where the circular economy is gaining traction. 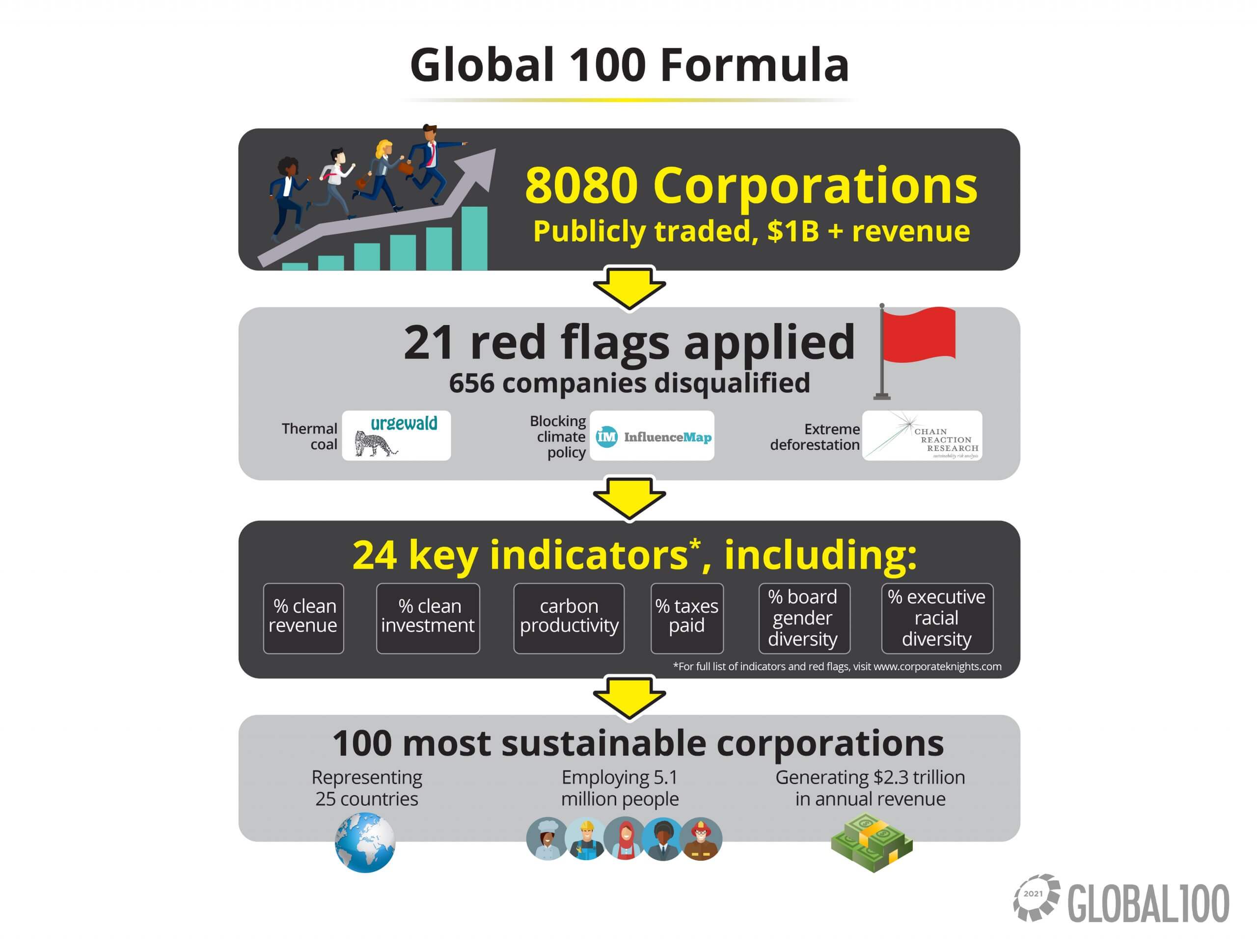 The Global 100 list continues to be dominated by companies from North America and Europe, but there are new entrants from India (Tech Mahindra) and Turkey (appliances and homeware group Arcelik, that country’s first representative). On an individual country basis, the U.S., with 20 companies, and Canada, with 13, are the best represented, but regionally, Europe continues to dominate the Global 100 with almost half the companies (46) to North America’s 33. The Asia Pacific region hosts 17 of the index’s members, while Latin America (two), Africa (one) and the Middle East (one) continue to lag.

The Global 100 illustrates just how much sustainability is a field independent of economic might, where Denmark and Finland (both five members each) rank higher than China, which has just two companies on the index. 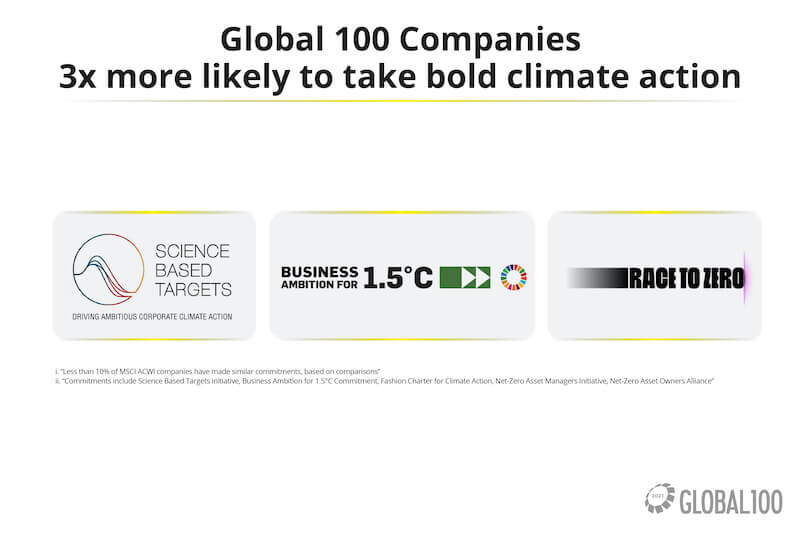 This year, we introduced several new key performance indicators (KPIs) when selecting the index’s constituents, reflecting not just the ongoing importance of tackling the climate crisis but also some of the social concerns that the pandemic and Black Lives Matter highlighted during 2020. These include paid sick leave, executive and board racial diversity, and clean investments (including clean capital expenditures, R&D and acquisitions). Corporate Knights found that the average clean investment for Global 100 companies was 33%, compared to 22% for the 8,080 companies analyzed for the ranking. As well, 86% of Global 100 firms offer at least 10 days of paid sick leave, compared to just 41% of the 8,080 assessed.

Sustainable firms also have longer lifespans: analysis by Corporate Knights with Thomson Reuters Datastream shows that the average age of a Global 100 company is 74 years, versus 53 for companies in the MSCI All Country World Index.

Notably, 60 of the Global 100 companies have signed on to the Science Based Targets Initiative to reduce their emissions in line with a 1.5°C future.

Sustainability is now central to doing business, as the Global 100’s continuing superior performance shows, but the introduction of our new KPIs highlights that it is always evolving – and companies must evolve with it.

Find out how this year’s Global 100 companies ranked: 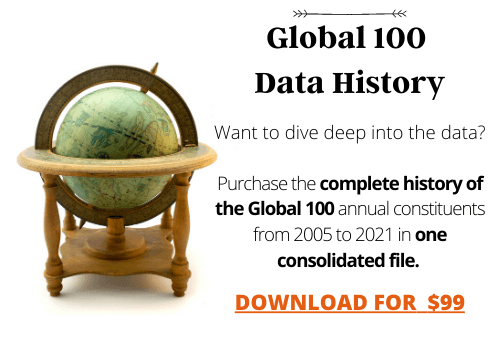 Be sure to attend today’s 17th Annual Global 100 Launch 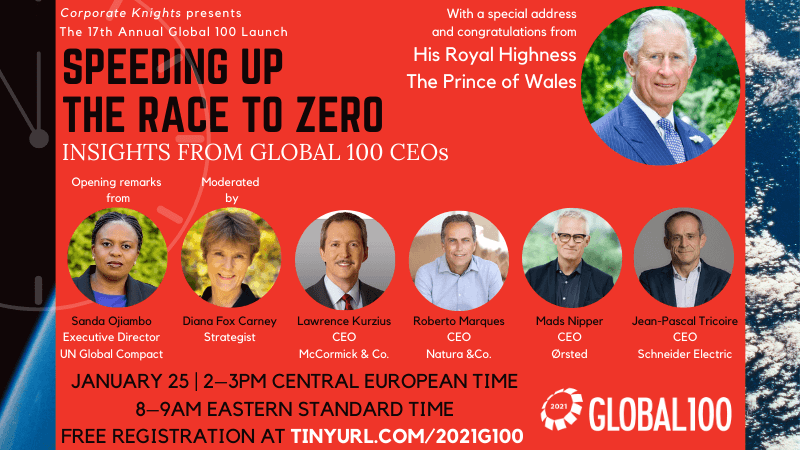