Many years ago, an unfortunate divorce occurred between economics and psychology. It was economics that initiated the proceedings, having decided that subjective emotions, held to be the wellspring of human behavior by psychology, were unquantifiable and thus unknowable. Economics believed it must rely exclusively on objective data, like prices and incomes. It took custody of those. The subjective experience of wellbeing, which is arguably the ultimate goal of our economic striving, was left to psychology.

Following the divorce, income became the logical way for economists to measure wellbeing. Income has a lot to recommend it for this purpose. It is simple to measure and relevant both to individuals and businesses. However, it is easy to forget that for individuals, income is primarily a means to other ends, such as health and the experience of pleasure and comfort. It isn’t that old-school economists disagreed. They just doubted it was possible to study how economic activity relates to subjective experience in a scientific way.

To be fair, social scientific surveys, which can overcome idiosyncrasy by studying large numbers of people, were in their infancy. I have recently been analyzing just such a survey to compare how the experience of wellbeing, in particular the emotions people typically feel, is related to income level.

When we think about how we use income in pursuit of wellbeing, our minds may first turn to the good feelings we get from eating tasty food, living in a comfortable home, taking a vacation, or being financially secure. These experiences also reduce our experience of painful emotions.

I study how the frequency of painful emotions is related to income. My research focuses on six painful emotions: sadness, nervousness, restlessness, hopelessness, worthlessness, and the feeling that everything is a big effort.

Does income provide relief from emotional pain? To answer this question, I create an emotional pain score ranging from zero to 24. A person who scores 24 has felt all six painful emotions constantly during the past 30 days, while a person who has zero has not felt any of them at all. The average person scores a three. The 3 per cent who score 13 or more are experiencing emotional pain consistent with a mood disorder such as depression.

The pain of poverty

The figure below illustrates how the experience of emotional pain varies with income. The red line shows that the average emotional pain score falls from five to two as family income rises from $10,000 (U.S.) to $320,000. In other words, the average poor person has about two and a half times the level of painful emotions as the average rich person. 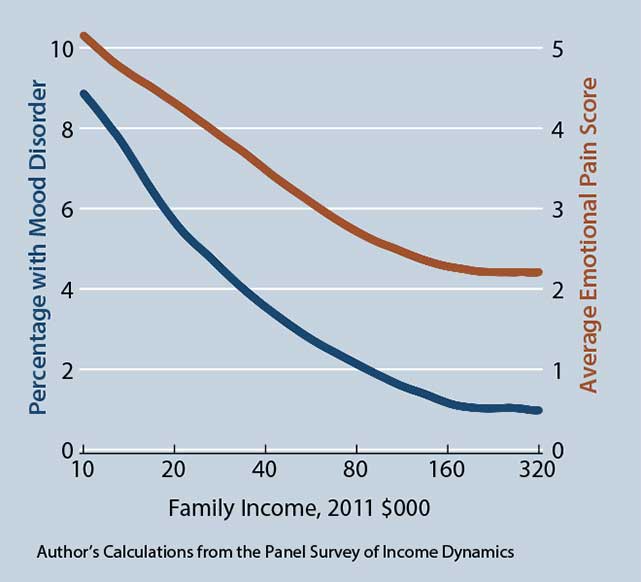 Showing these correlations is only the first step. Does income actually cause these changes in emotion, or is some hidden factor lurking behind them both? Careful analysis suggests that much of the decline in painful emotions with income, both on average and at the mood-disorder level, is actually caused by changes in income. This means that, for many sufferers, depression is a consequence of poverty. Further, the causal effect of income on emotional pain is much stronger at low incomes than high ones.

This is strong evidence in favour of increasing the relative tax burden on high-income earners as a way to increase the wellbeing of society as a whole.

Even conservative observers of the economy, such Goldman Sachs chief executive Lloyd Blankfein, have voiced concerns about the negative social impacts that high levels of income inequality have in advanced countries. The relationship between income and emotional pain bolsters these concerns by pointing out how little benefit the rich get from additional income compared to the poor.

Opponents of shifting the tax burden back to high earners often argue that doing so will hurt economic growth. We needn’t be too worried. Compared to the past 35 years, U.S. economic growth was actually higher under the more progressive tax regime of 1950 to 1980.

As a research paper published last year by the International Monetary Fund concluded, “redistribution appears generally benign in terms of its impact on growth.” Its cross-country study found, instead, that “lower net inequality is robustly correlated with faster and more durable growth,” even when low inequality comes about through redistribution rather than the market.

A more progressive tax system may be one of those instances in which we can have our cake and eat it too.

David Clingingsmith is associate professor of economics at the Weatherhead School of Management, Case Western Reserve University in Cleveland, Ohio.