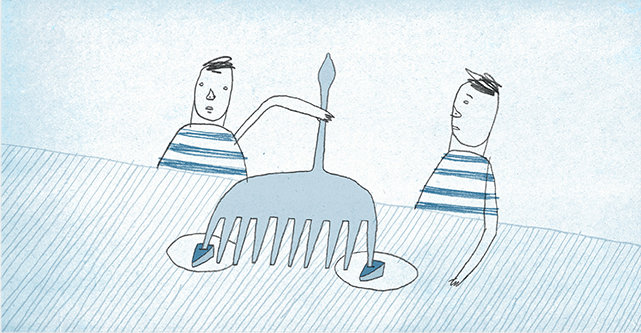 In John Huston’s classic film Key Largo, Humphrey Bogart asks Edward G. Robinson, playing gangster Johnny Rocco, what it is he wants. It’s more. “Yeah. That’s it. More. That’s right! I want more!” Will he ever get enough? “Well, I never have. No, I guess I won’t.”

In a sense, we are all Johnny Rocco. We want more, but don’t quite know what, and certainly don’t know why. Our economies are based on Rocco-nomics, built on the foundation of growth and accumulation. Rob Dietz and Dan O’Neill propose an alternative in Enough is Enough: Building a Sustainable Economy in a World of Finite Resources. They call it a steady-state economy.

“At its simplest, a steady-state economy is an economy that aims to maintain a stable level of resource consumption and a stable population. It’s an economy in which material and energy use are kept within ecological limits, and in which the goal of increasing GDP is replaced by the goal of improving quality of life.”

But how do we go from Rocco-nomics to steady-state economics? Dietz and O’Neill have a few not-so-modest suggestions, including stabilizing the population, achieving a fair distribution of income and wealth, reforming monetary and financial systems, changing the way we measure progress, securing meaningful jobs and full employment, and reconfiguring the way businesses create value.

That sounds like an impossible set of goals, but it doesn’t stop the authors from looking at each issue through three question-focused lenses: What are we doing now? What could we be doing instead? And where do we go from here?

Some of their answers make a whole lot of sense. For example, they point to the fact that every year there are 80 million unintentional pregnancies, and coincidentally, that’s how much the world population is growing each year. Better education and contraceptives could go a long way to stabilizing the global population.

But one can’t discuss a steady-state economy without a serious discussion about money, so the authors get serious about reforming monetary and financial systems. They compare bank lending to counterfeiting, taking the position that banks, not the government, make money out of thin air. The authors note that “the financial system is complex, and many of the concepts involved are challenging to communicate.” Indeed they are, and the authors fail to build a convincing case for a whole new currency system.

Income inequality is another issue they tackle. As Henry Wallich once noted, “Growth is a substitute for equality of income. So long as there is growth there is hope, and that makes large income differentials tolerable.” Former U.S. president George W. Bush famously said that we had to make the “pie higher,” but the authors suggest that, “if the size of the oven prevents us from baking a bigger cake, then we’d better start considering how to slice the pieces and how big a slice each person is entitled to eat.”

The way we do business would have to adapt to a steady-state economy as well. The authors complain that increases in productivity are leading to fewer jobs, where they think it should instead lead to a shorter work week with the same income. Companies driven by the profit motive might think otherwise, which is why the authors propose business models that create shared value, have different business structures (like co-ops) and different measures of success, such as tracking social and environmental performance.

Then there is the demand side, which requires changing consumer behaviour away from a culture of consumerism, and promoting alternatives like the sharing economy, or simpler “downshifted” lifestyles as many are trying today. “Such people are taking the idea of enough to heart, and they are living better lives because of it.”

The authors acknowledge that achieving a “monumental shift” in culture and the way people behave seems daunting. Indeed, it sounds impossible. “But there’s hope that it can be done,” they write. “All we need to do is look at the numerous ways in which culture and behavioural norms have shifted over time. And in today’s hyper-connected world, changes can happen faster than at any point in history.”

It is true that behavioural norms have shifted over time. Slaves got freed and women got votes, changes that actually seem simple compared to some that the authors propose, and took decades to implement.

Dietz and O’Neill propose a vision where “we replace the culture of consumerism and the value of more with the culture of sustainability and the value of enough.” It is a positive, optimistic view of the future, but it’s not, dare I say, enough to convince us that it wouldn’t be sending us back to the middle ages, but with Wi-Fi.