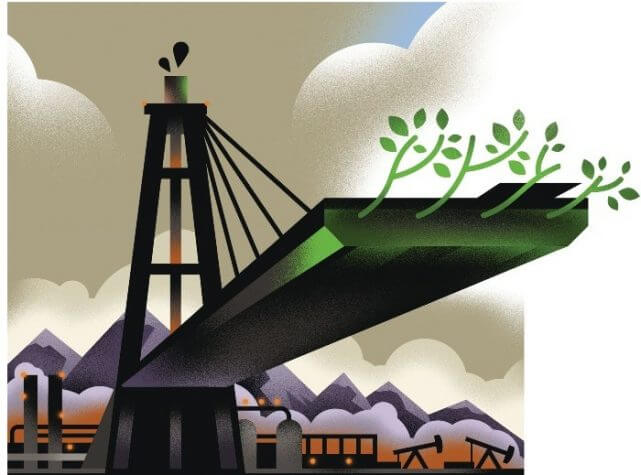 Linda Coady is a rare bird who can work on both sides of the deep and bitter divide separating oil-industry partisans and environmental advocates.

After spending six years as vice-president for sustainability at pipeline giant Enbridge Inc., Coady took up the reins at the Pembina Institute environmental think tank at the end of March.

Environmental advocates have long regarded Enbridge as a public enemy because of its proposed Northern Gateway pipeline, the current expansion of its mainline oil pipeline in the U.S., and its fight over refurbishing a pipeline in Michigan where it had a major spill into the Kalamazoo River a decade ago.

For its part, Calgary-based Pembina has been in the crosshairs of oil industry defenders, including Alberta Premier Jason Kenney, who allege Pembina has used funding from American foundations to undermine the province’s leading industry. (Last July, Kenney launched a $2.5 million official inquiry into “foreign funded defamation” of the oil industry.)

Coady is well positioned to navigate in the acrimonious arena, having spent her career working to find common ground between corporate interests and environmental organizations.

Early in her career, she was vice-president of environmental affairs at a B.C. forestry company (later bought by Weyerhaeuser). In 1993, she played a central role in ending the so-called war in the woods when environmentalists clashed with forestry companies over clear-cutting in Clayoquot Sound on Vancouver Island. A stroller run-in between Coady and another new mother – her “arch nemesis,” then-Greenpeace activist Karen Mahon – led to breakthrough talks between the two sides. As Clayoquot blockade organizer Tzeporah Berman wrote in her autobiographical account of that era, “I think [Coady] was the first person I met from a logging company who really talked to us, and about the issues instead of trying to spin them.”

That experience led Coady to accept a position with WWF-Canada as the wildlife organization’s western vice-president. She went on to lead sustainability efforts with the 2010 Vancouver Olympics before joining Enbridge. She also co-chaired the federal Liberal government’s Generation Energy council that, in 2018, provided a roadmap for Canada to pursue the decarbonization of the economy.

The B.C. native will need all her diplomatic skills to bridge the current divide, which has escalated from an environmental issue to a fight that is deeply cultural, political and economic, in which both sides perceive existential threats.

Pembina’s board chair, David Runnalls, acknowledged in an interview that some of the institute’s young, idealistic staff members were apprehensive about the appointment of a former pipeline executive.

He said Pembina has always been focused on finding common ground and solutions to environmental problems rather than simply opposing industrial development. It has, however, taken stands on the need for robust environmental protection with strong regulations that are strictly enforced.

“Pembina has never been particularly popular with the Alberta government,” he said. “And some of the other NGOs don’t like us because they consider us vendus and too close to industry.”

Former Pembina executive director Ed Whittingham applauded Coady’s appointment. “She is one of those people who can flit seamlessly between the private sector and the NGO sector,” he said. He knows well that such dexterity can become uncomfortable given the politically fraught battle between oil industry supporters and environmental activists in Alberta.

After leaving Pembina, Whittingham was appointed by the former NDP government as a board member for the Alberta Energy Regulator. He became a whipping boy in the 2019 provincial election when Kenney accused him – and Pembina generally – of taking foreign funding to engage in “economic sabotage” against the industry.

Whittingham called the attack “an unprecedented smear campaign,” noting that contributions from U.S. foundations represented a small fraction of Pembina’s revenues. Runnalls said the organization has, over the years, received more revenue working with Calgary’s oil companies than it ever did from American foundations.

Coady believes the polarization may still yield opportunity to work on solutions to the industry’s environmental challenges.

In an interview from her Vancouver home, the new Pembina executive director said she has already been in contact with Alberta government officials, including Energy Minister Sonya Savage. The two worked together at Enbridge before Savage joined the Canadian Energy Pipeline Association as vice-president for government relations. “I’ve reached out to people in the Alberta government, including Minister Savage, and have had a very warm reception,” Coady said. “So, so far, so good.”

“Oil and gas is part of the problem on emissions, and there is a real opportunity for Canadian oil and gas companies to be part of the solution.”
—Linda Coady

Coady maintained that the fossil fuel industry will continue to produce energy for the world for a period of time, and therefore companies must work to reduce emissions. She sees a role for Pembina in assisting in that process.
“Oil and gas is part of the problem on emissions, and there is a real opportunity for Canadian oil and gas companies to be part of the solution,” she said.

She pointed to federal support to clean up abandoned oil wells and assist industry in reducing methane emissions as examples of efforts in which government, industry and NGOs can cooperate.

The oil industry can contribute to that effort by driving down its emissions for each barrel of crude produced and by developing technologies like carbon capture and storage and the use of hydrogen as an alternative fuel, she said.
Critics argue, however, that those approaches fail to take into account the GHG emissions associated with the use of the oil and gas produced. The industry essentially needs to be wound down over the coming decades, said Berman, now international program director for Stand.Earth.

Coady “may be looking for a technological fix or just emissions-intensity reductions coming from industry, and that won’t be enough to protect Canada’s economy or ensure a stable climate,” Berman said.

While the fate of Canada’s oil and gas sector remains the most fraught area of debate, Pembina is active in other sectors where governments and industry are pursuing the low-carbon transition.

In B.C., for example, the institute is working with the provincial government and the City of Vancouver to develop standards for commercial wood buildings. In Ontario, it’s engaged in efforts to promote low-carbon transportation options and environmentally friendly urban planning.

Coady said she is also looking for Pembina to take a prominent role in the push for more sustainable financing practices.

With leadership from Mark Carney, former governor of the Bank of England, the United Nations is encouraging financial market regulators to require companies to report to investors on their carbon risks and opportunities, including how well they would fare if the world succeeds in making the transition to a low-carbon economy. Such practices would drive investment capital away from activities with high climate-related risks and toward those activities that can benefit from opportunities created by the transition.

Coady noted the federal government is gearing up for a major stimulus program that will finance low-carbon projects and technologies. But she said that must be matched with incentives for the private sector to complement that government spending.

“I see an opportunity for groups like Pembina to try to connect those dots between the public investment and the private investment and to help make the case for return on investment in projects that can further drive decarbonization.”

She said Pembina’s “got an important role to play in the transition of energy systems to a lower-carbon economy.”
“So when they asked me about joining the organization, I pretty well leapt at the opportunity.”