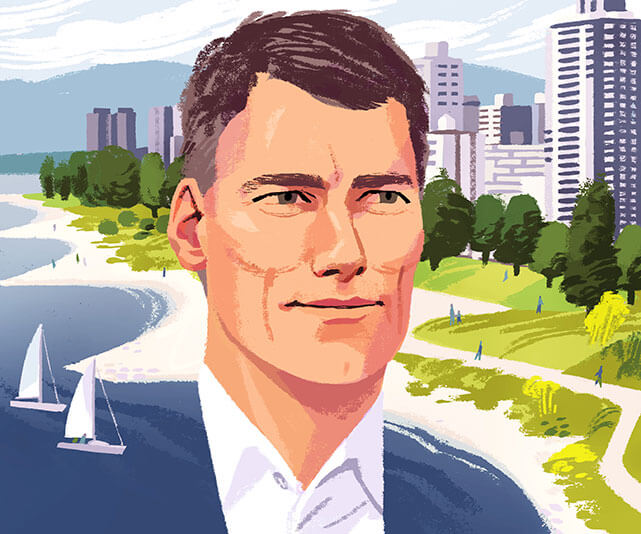 October 2008 was a dark time for the environmental movement in British Columbia and throughout Canada. The economic downturn had focused the electorate’s attention away from climate change onto pocketbook issues, turning Stéphane Dion’s Green Shift plan into an albatross around the neck of the federal Liberal Party and contributing to the re-election of the Conservatives.

In B.C., Premier Gordon Campbell’s province-wide carbon tax, introduced earlier that year, was polling poorly going into a Spring 2009 election against an NDP party that had vowed to “axe the tax.” Presented with these developments, the Globe and Mail’s Gary Mason opined that “it may be some time before we again see a political leader in Canada brave enough to build a campaign platform around saving the environment.”

A month later, Vancouver Mayor Gregor Robertson was elected on a platform dedicated to doing just that.

From rancher to farmer to entrepreneur, Robertson’s life before politics was anything but conventional. Born in North Vancouver, he was accepted into the University of British Columbia but ended up transferring to Colorado College, a private liberal arts school in Colorado Springs. On a pre-med track, Robertson studied English and biology alongside ambulance training. But a change of heart led to him backpacking across Asia with his future wife, Amy.

After several months spent ranching in the interior of B.C., he began painstakingly restoring a 1957 sailboat named Shoeless Joe. Once complete, the newlyweds took off on an 18-month trip across the Pacific.

On returning to Canada – and in order to satisfy a growing passion for farming and sustainability – the couple sold off their sailboat and purchased an old dairy farm in B.C.’s Glen Valley. They began growing organic produce and livestock just as the organic local food movement was finding its legs. In 1994, Robertson teamed up with former schoolmate Randal Ius to form Happy Planet, a fresh juice company. By the end of the decade the company had grown so rapidly that it was sold in Starbucks outlets across the country. 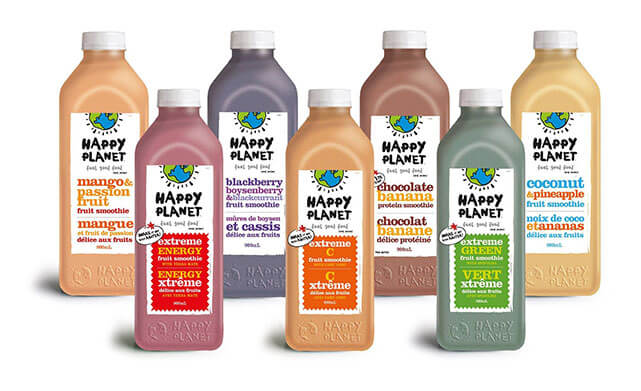 “I’ve always been an entrepreneur,” explained Robertson in an interview with Corporate Knights. “Currently, I consider myself a political entrepreneur, but whatever I’ve done in life I have always approached it grounded in sustainability, trying to make positive change on environmental and economic and community levels simultaneously.”

Over the years he grew more interested in policy and activism, serving as a director at the Tides Canada Foundation from 2002 to 2004. In 2005, he was persuaded to run for a seat with the provincial NDP, which he won in a competitive downtown riding. But frustrated by the slow rate of change and limitations imposed by strict party discipline at the provincial level, he resigned his seat and ran for mayor of Vancouver.

What was so surprising about Robertson’s victory wasn’t so much the scale as much as its unabashedly green message. After Robertson won the nomination for the left-of-centre municipal party Vision Vancouver, he managed in 2008 to form a temporary alliance with rival parties the Coalition of Progressive Electors (COPE) and the Green Party. His mission, as head of that alliance, was to take on the incumbent Non-Partisan Association, which had held the mayor’s seat since 2005.

Robertson’s campaign was built around two particularly ambitious goals: to eliminate street homelessness in the city by 2015 and become “the greenest city in the world.” The environment and sustainability commitments occupied nearly a third of the real estate in the party platform. One Green Party candidate for the park board boasted “Gregor Robertson could be a Green Party member.” Voters were impressed, sending Robertson to city hall with a strong majority of councillors.

These findings were turned over to city staff, which then undertook a lengthy public consultation with business groups and members of the public. In 2011, The Greenest City 2020 Action Plan (GCAP) was approved by council, establishing a series of goals and benchmarks for turning Vancouver into the most sustainable city in the world by the end of the decade.

While Vancouver had been making strides in some areas, including walking and biking, prior to 2008, the GCAP required a wholesale reinvention of the city itself. The 15 goals for 2020 included a doubling of the number of green jobs, a 33 per cent reduction in greenhouse gas emissions, exposure to the healthiest air and water quality of any municipality around the world, and having more than 50 per cent of trips in the city occurring by foot, bicycle, and public transit.

After seven years in office, GCAP’s impact on the city is hard to miss. While Vancouver’s “Ecodensity” plans began under Robertson’s predecessor, recent densification efforts in the downtown core, along transit corridors and major corridors have transformed significant portions of the city into more walkable neighbourhoods. “Another million people are expected to move into Metro Vancouver by 2040 and densification is the only responsible way to address that growth, while maintaining quality of life and mitigating the environmental impact,” explains Robertson.

This has been accompanied by a rapid expansion of separated bike lines and car-sharing programs. Vancouver’s bike lanes experienced record traffic last summer, a point the city punctuated by displaying live data collected by an automatic bike counter on a screen mounted to the Burrard Bridge, which connects downtown Vancouver to Kitsilano. 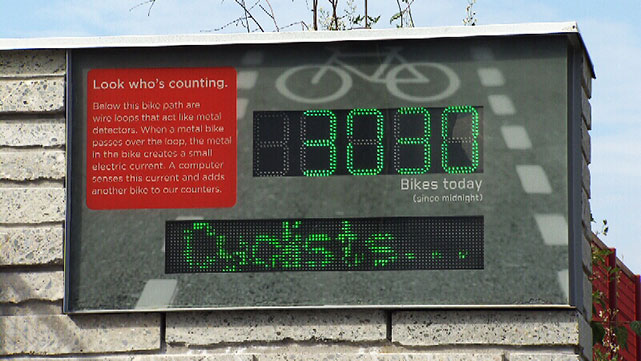 Automatic bike counter on a screen mounted to the Burrard Bridge.

The city has also adopted the greenest building code in North America, and is aiming for a carbon-neutral standard for all new construction after 2020. A new single-family home in Vancouver already has a 53 per cent smaller carbon footprint than one built in 2007, boasts Robertson.

Progress has also been made on less obvious fronts, including water use. “We’ve been water hogs traditionally because it rains so much in Vancouver and people didn’t think that it (conservation) was necessary,” said Robertson. But robust conservation measures have reduced water consumption 20 per cent, surprising many residents.

Although Robertson will become the longest-serving mayor in Vancouver’s history by the end of his third term in 2018, he’s pushing just as forcefully for change as he did when first elected. This includes constantly looking to other cities around the world for inspiration and best practices. He helped, for example, to found the Carbon Neutral Cities Alliance earlier this year. In March, Vancouver’s city council voted unanimously to shift the city towards 100 per cent renewable energy by 2050 – an ambitious goal that will put pressure on other Canadian cities.

So far, the electorate has been broadly supportive of Robertson’s sustainability transition strategy. “On the one hand, Vision Vancouver has the support of people who want to see Vancouver as a centre for sustainability, for the high-tech industry,” said Maxwell Cameron, director of UBC’s Centre for the Study of Democratic Institutions. “But at the same time they’re close with developers, and are very interested in promoting the kind of development that allows us to build a denser and thus lower carbon-footprint city.” This potent combination means that Vision Vancouver remains well financed, while still attracting a substantial electorate that prefers them to the alternative.

Another reason for ongoing support of Robertson is the size of the city itself. The municipality of Vancouver has about 600,000 residents. This cuts more suburban voters from the Vancouver metropolitan area, unlike cities such as Toronto or Montreal.

Robertson and Vision Vancouver did face significant pushback during last year’s re-election regarding a perceived lack of public consultation by city hall. This culminated with an apology from the mayor himself in the waning days of the campaign, and a promise to do better going forward. “A substantial portion of the electorate can get behind Robertson’s goals,” Cameron said. “The question is how he does it, and that’s really what city hall needs to work on.”

No doubt, Vancouver’s municipal boundaries have produced a favourable electorate for Robertson, but they’ve also limited his ability to expand public transit throughout the region. Despite the regions’ mayors endorsing a proposal to redirect revenues generated by the B.C. carbon tax toward regional transit projects, Premier Christie Clark insisted instead on a transit referendum that would institute a 0.5 per cent sales tax across Metro Vancouver. Voting on this will end in late May, but results are not expected until sometime in July. The transit plan would, in part, allocate substantial funds toward construction of a subway along the city’s crowded Broadway Corridor. 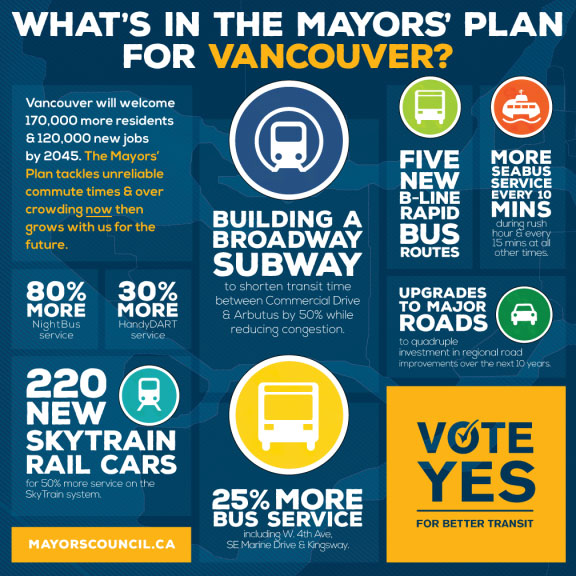 The prospects don’t look good for the Yes vote. “It’s never popular to increase taxes and that imperils the referendum outcome, as there’s a knee jerk anti-tax movement coming from the suburbs,” said Robertson. “But certainly in Vancouver, the majority recognizes how crucial this investment is for mobility.” While walking, biking or transit currently makes up 49.7 per cent of trips in the city – one of the best records in North America – some form of large-scale transit investment will be needed in order to push Vancouver well past its 2020 goal of 50 per cent.

After seven years at the helm, Robertson has developed an international reputation for his greenest city initiatives. In May, he was invited to address the National Assembly in France about Vancouver’s Action Plan, while the city continues to rank highly on liveability and sustainability rankings.

Even with these achievements, Robertson doesn’t sound like someone who’s ready to slow down anytime soon. “In city politics we’re able to enact change in a more direct and hands-on manner that enables our city and people to craft a brighter future for all,” he explains.

“That’s a lot more fulfilling than past careers.”