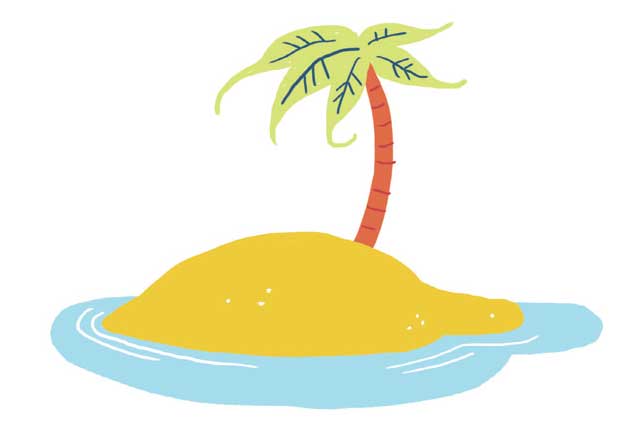 Apple may have been passed by Google parent company Alphabet as the world’s most valuable company in February, but it still maintains a leadership position in one notable category: the amount of assets held offshore in global tax havens. It was holding $181 billion (U.S.) in tax havens as of December 2014.

An analysis by the American non-profit groups Citizens for Tax Justice and the U.S. Public Interest Research Group Education Fund dug through SEC filings for the 500 largest American companies to come up with one of the most comprehensive inspections of tax haven use in corporate America.

The report, Offshore Shell Games 2015, found that at least 358 of Fortune 500 companies are operating a total of 7,622 tax haven subsidiaries, although there are likely more. These subsidiaries hold $2.1 trillion in accumulated profits offshore for tax purposes. Two-thirds of this sum is concentrated among the top 30 companies.

Not all loopholes are created equal

Some American multinationals are able to take greater advantage of tax loopholes than others, as evidenced by which industries populate the top 30 list. Pharmaceutical and technology companies are best positioned to capitalize on transfer pricing rules to move intellectual property abroad (learn more here), although this practice is used by other industries as well.

Google, for example, moved a number of its technology patents to Ireland so it could take advantage of a loophole known as the “double Irish.” The Irish subsidiaries holding the patents then registered in Bermuda, allowing Google to flow most of its worldwide profits into tax havens by paying its Irish subsidiary fees for the use of its intellectual property.

Apple is also known for its creative use of Irish tax policy, with almost all of its foreign operations run through an Irish subsidiary. One high-profile U.S. Senate committee investigation in 2013 made the rather astonishing discovery that Apple was taking advantage of subtle differences in tax language to allow its two major Irish subsidiaries to avoid paying any tax on the majority of their profits. 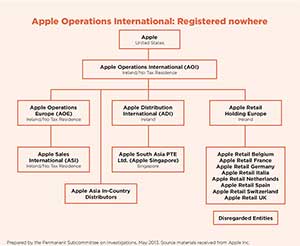 Click to see a flowchart of Apple Operations International (AOI)

It was, in effect, registered nowhere.

A number of financial services industries are also on the list. Morgan Stanley has 210 tax haven subsidiaries, including 100 in the Cayman Islands and 36 in Luxembourg. The transient nature of financial transactions allows firms to secure deals through low-tax jurisdictions.

Combing through SEC filings helps to capture the extent to which tax haven use has multiplied among Fortune 500 companies, but it does not tell the whole story. There are a variety of ways in which companies can shield the number of their tax haven subsidiaries when reporting, as evidenced by the number of companies that have begun to report fewer tax haven subsidiaries while simultaneously increasing profits held offshore.

Citigroup disclosed that it was operating 427 tax haven subsidiaries in 2008 but had reduced this number to 41 by 2014. At the same time it increased profits held offshore from $21.1 billion to $43.8 billion. Walmart, meanwhile, hasn’t reported using any tax haven subsidiaries for the past decade, despite holding $23.3 billion overseas.

Some preliminary steps have been taken to restrict the most egregious abuse of offshore tax havens. Aggressive lobbying by other EU states led Ireland to announce the phase-out of the double Irish loophole, although companies like Google will be allowed to continue using it until 2021.

The U.S. Treasury Department has repeatedly tightened regulations to avoid corporate tax inversion schemes like the recent Johnson Controls-Tyco merger, although at least 13 such deals have gone through over the past 18 months.

“Policymakers should reform the corporate tax code to end the incentives that encourage companies to use tax havens, close the most egregious loopholes, and increase transparency so companies can’t use layers of shell companies to shrink their taxes,” states the report.