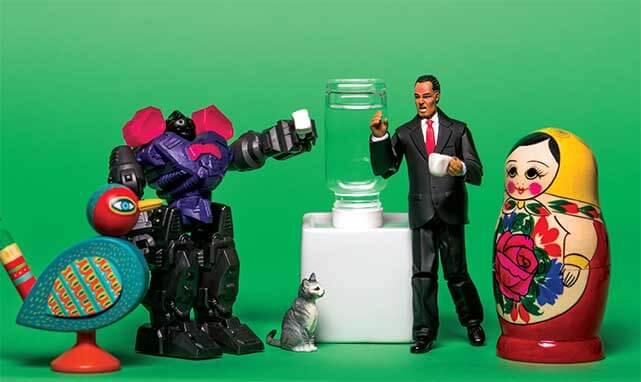 What can a little boy looking at a violin and a girl holding books in a field tell us about the motivations of Millennials?

Nicole Borges, a medical education researcher at Wright State University in Ohio, spearheaded a study in 2010 in search of an answer. By better understanding what drives this generation – today’s driving-age teenagers and 20-something adults – the thought was that medical school educators could adapt their teaching methods to improve student learning.

The students, who averaged 18 years of age, were asked to write a story after being shown two picture cards: a boy looking at a violin on a table in front of him; and a girl carrying books while an older woman looks on and a man in the background works in a field. The students had to describe the people in the pictures, what was happening, what led up to the situation, and what was likely to happen later.

A strange assignment under any context, but what researchers call a Thematic Apperception Test has proven an effective way of assessing personality, including individual motive. From their story analysis, Borges and her study co-authors determined that the Millennials who participated were motivated less by power, money and the need to exert influence over others and more by a desire to improve themselves, build positive relationships, and collaborate with others toward the betterment of society.

“Compared with previous generations, Millennials have greater needs to belong to social groups and to share with others, stronger team instincts and tighter peer bonds, and greater needs to achieve and succeed,” their study, published in the peer-reviewed journal Medical Education, concluded.

The findings, while based on med school students, speak to the broader contention that Millennials – the largest, most educated demographic cohort in history – see the world differently and have expectations about the future that distinguishes them from the more individualistic, cynical and money-focused Generation X-ers who came before them.

This is largely because the world they have grown up in is quite different – economically, technologically, environmentally and psychologically. True, like all generations you’ve got your slackers and self-absorbed brats, but there are kernels of truth in generalizations about Millennials that employers and politicians need to understand, especially as these young achievers reach their prime spending and working years.

What’s indisputable is that Millennials are what Goldman Sachs calls the world’s first “digital natives.” They were practically born with a computer on their lap and a smart phone in their hands. Connectivity – along with the virtual globalization this enables – is core to their being.

“Technology defines Millennials,” according to a 2014 report from market research firm Nielsen. “They sleep with their mobiles and post status updates from the bathroom.”

Quite simply, they don’t remember a world without the Internet, mobile devices, e-commerce, online dating and all-you-can-eat entertainment. Cameras with film? Music on tape? Banking in person? Silly relics of a bygone era.

“I haven’t lived in a non-digital world,” says Alice Park, 27, who co-founded the Vancouver-based ride sharing start-up Go2gether. She says growing up with the Internet has made it easy for anyone in her generation to build their own identities and reputations and reach out to others based on common interests.

“It’s very empowering, and has helped us determine our influence over others, as opposed to the top-down approach our parents lived by,” she explains. “We’re more inclined to collaborate with others who may not necessarily have the fanciest degrees or the most money.” 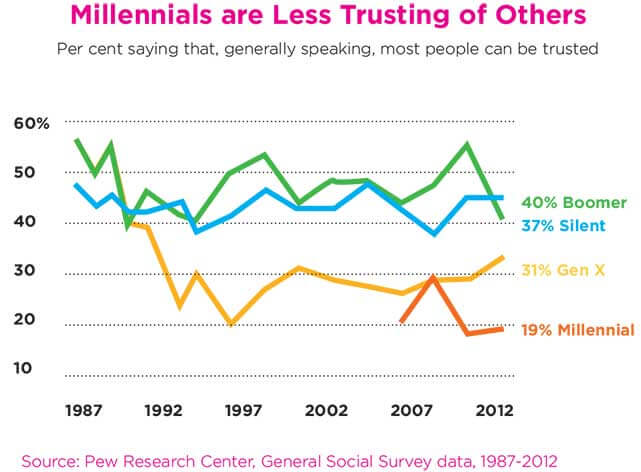 As much as hyper-connectivity has allowed them to define themselves to the world, it has also made the world more accessible to them. Through social media and the near-infinite search power of Google, Millennials are more aware of what’s going on in the larger global community – good, bad and ugly – than any other generation.

“It’s a lot harder to ignore issues when technology puts them at the forefront,” says David Berliner, 27, founder of CoPower, an online investment platform for renewable energy projects. “Those issues weren’t in your face 30, 20, even 10 years ago.”
Climate change. Resource scarcity. Pollution in China. Child exploitation in India. Sweatshops in Indonesia. Ebola in Africa.

Daily reminders oppressively weigh on today’s teens and young adults, a group that’s poised to inherit a world seen as dysfunctional – but also in dire need of solutions. This raw awareness may explain why more Millennials demand action on climate change than the average U.S. voter, according to research from Yale University and George Mason University.

“It’s a struggle to stay positive,” admits Park, adding that it’s part of the reason she and her friends try to stay true to their values – embracing diversity and demanding fairness and respect for the environment – both in and out of work. “We’re looking for purpose in everything that we do.”

This includes taking a more values-based approach to consumer spending. Young adults in their late 20s are 30 per cent more likely to purchase a product from a socially responsible company than someone in their late 50s, according to research from Nielsen.

The greater tendency to spend with a conscience, combined with the economic uncertainty that comes with record youth unemployment and debt, has led to some interesting behavioral trends that are changing the workplace, the way we do business and the direction of public policy. 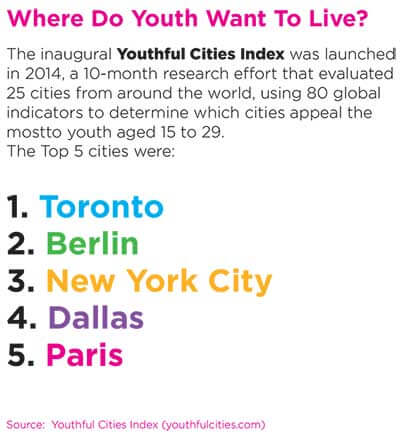 Consider the impact just on transportation: Fewer students are getting their driver’s license, and less dream of owning a car compared to previous generations. Mobile devices, not vehicles, are more likely to be the centre of their universe. According to U.S. transportation data, the average distance driven by 16 to 34 year olds dropped nearly a quarter between 2001 and 2009, and the downward trend continues. According to the Urban Land Institute, 18 per cent of surveyed Millennials were using public transit in 2013, four times more than Gen X-ers.

Where Millennials are choosing to live speaks to how they get around. In a survey of Americans aged 25 to 34, 51 per cent said they preferred to live in urban neighbourhoods within walking distance to shopping, restaurants and work, versus 32 per cent in 2000 and just 12 per cent in 1990, according to City Observatory, a think-tank that studies city trends.

Some of this talks to financial constraints that make owning a car or supporting a mortgage difficult – two thirds of Millennials, for example, are renters. It also points to technologies that have made car sharing, ride sharing, and transit tracking affordable and more convenient.

Unlike previous generations, the car isn’t a default transportation option for Millennials, who are more open to multiple modes of travel – from walking and cycling to taking the bus or reserving a Zipcar.

Whether by choice or situation, today’s young adults are also a frugal bunch always looking for the best deal – again, getting an assist from technology that allows for instant price comparisons, advice from Facebook friends, and a new depth of product research that has disrupted many industries and flummoxed marketers.

Millennials want cheap goods, but they’re also more likely to pay for more sustainable options when presented with the choice.

This reluctance to compromise can also be observed in their work life. As demographic experts often say, “Gen-Xers live to work while Millennials work to live.” Work is a “thing” to these young adults, not a place, so they expect to be judged on what they produce and not where they produce it. In other words, they want flexible hours and autonomy. At the same time, they want their ideas heard, crave feedback and seek recognition that their work is having an impact.

In job interviews, they have just as many questions for employers as employers have for them. Decent salary is important, but just as much emphasis is placed on work-life balance, workplace culture, company values, and how employers contribute to and are perceived in the community. 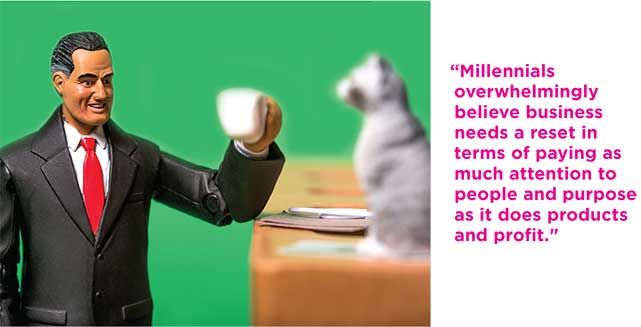 “Millennials overwhelmingly believe that business needs a reset in terms of paying as much attention to people and purpose as it does products and profit,” according to the 2015 Deloitte Millennial Survey. “Seventy-five per cent of Millennials believe businesses are too fixated on their own agendas and not focused enough on helping to improve society.”

If their needs aren’t met in the corporate world, Millennials are more likely to venture out on their own to achieve the impact they seek.

“I see lots of friends working very hard in jobs they’re not passionate about. I think all of them sit around on Thursday nights at the bar talking about startup ideas,” says Berliner, an example of someone who took the plunge. 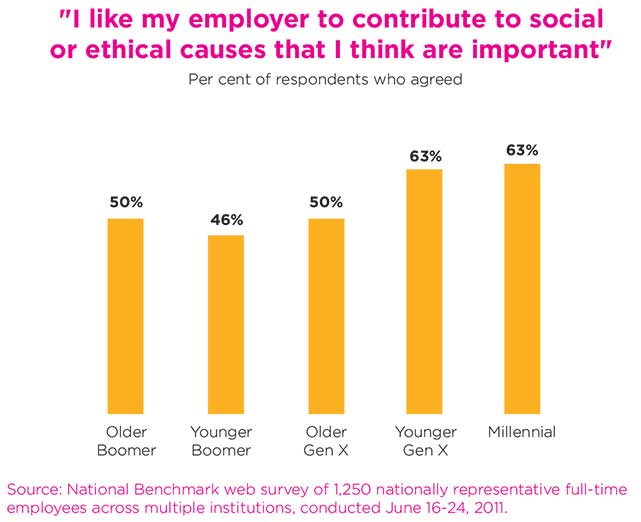 Inspiration to launch his own business, he says, came partly from his generation’s willingness to share stories of success – and even failure. Again, technology here has acted as a powerful enabler, allowing budding entrepreneurs like Berliner to explore new ideas, learn from others and tap into the generational instinct to collaborate. “Seeing other people like me doing something I like, that tells me I can do it as well,” he says.

Both Berliner and Park are under no illusion the path forward will be easy. In many ways the odds are stacked against them, but they remain positive they can make the world a better place and earn a living doing it.

“We’re redirecting a Titantic,” says Park. “I guess the challenge is what motivates me to try.”

Perhaps that’s exactly what the boy with the violin is thinking.