The famous wetlands of Ahwar in southern Iraq received UNESCO World Heritage Status in July, bolstering post-war efforts to restore the fragile marshlands. The Ahwar marshes, often pointed to as the most likely site of the Biblical Garden of Eden, are fed by the Euphrates and Tigris rivers. The protected area will consist of three archaeological sites from ancient Sumerian cities and four wetland marsh areas in southern Iraq. 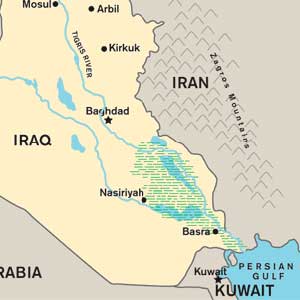 The marshes, UNESCO explained in its announcement, “are unique, as one of the world’s largest inland delta systems, in an extremely hot and arid environment.” The area is a key spawning ground for Gulf fisheries, and is home to over 40 bird species. Migrating birds between Siberia and Africa also use the marshes as a waystation.

Once stretching over 9,000 square kilometres, the Ahwar marshes were purposefully drained by Saddam Hussein in the 1990s in a bid to quash Shiite rebels using the area for protection and punish local Marsh Arabs viewed as disloyal. The remaining marshland had been reduced to just 760 sq. km by 2002. The overthrow of Hussein led locals to destroy most of the local dams and canals. These steps, combined with an international restoration effort, have now restored 40 per cent of the original marshland. The Iraqi government has established the long-term goal of restoring 6,000 sq. km of marshland, but this is complicated by upstream dams continuing to restrict water along the Euphrates and Tigris rivers and local irrigation schemes.