Illustration by Jack Dylan. Detail from the painting Panoramic View of the Amstel Looking Toward Amsterdam by Jacob van Ruisdael, 17th century

Rome, Italy – Big Oil is fading on the stock market and in investors’ imaginations. Clean power companies are the rising stars, and analysts already have a name for the top ones. They are the “new energy majors” and they are coming on strong.

Iberdrola of Spain, Enel of Italy, Ørsted of Denmark and America’s NextEra Energy all have market values that are moving into, and sometimes beyond, the oil majors’ territory and have shareholder returns that are absolutely blowing them away. Enel, Europe’s largest utility, had a stock market value equivalent to US$110 billion in the late autumn after a 23% rise in the past year. BP’s value was US$83 billion, after losing about 40% of its value.
Italy’s ERG is also catching the new-energy wave, proving that high growth and value creation are not limited to the biggest names in the industry. Like some of its big-name rivals, the Italian company embarked on a black-to-green transformation out of necessity, not out of the goodness of its heart, but soon learned that cleaning up its act could produce compelling shareholder returns.

ERG began life as an oil refining and oil products company just before the Second World War and stayed that way until 2008, when it started to push its carbon assets out the door and moved into wind power, as Ørsted did when it shed its oil and coal businesses on its way to becoming the world’s top offshore wind-power company. Since then, ERG’s shares have gone from €7 to €25. “Now I’m fighting against climate change, and it’s paying off well,” says Luca Bettonte, the dapper accountant and auditor who became ERG’s chief executive officer in 2012.

ERG knows it will never be a “new energy major.” Its market value is €3.8 billion and it has only a small following on the Italian stock exchange in Milan because the Garrone family – the “G” in ERG – owns almost two-thirds of the shares and is giving no signs that it would relinquish control. But the company is ambitious. It’s already the top wind-power company in Italy and recently broke into the top 10 in Europe, where its expansion plans are focused.

Reaching the top five is not out of the question, and if President Joe Biden makes good on his commitment to propel the United States into clean energy, trans-Atlantic investments “might be an opportunity,” Bettonte says.
Until 2017, ERG and the French oil giant Total jointly owned TotalErg, the fourth-largest fuel marketer in Italy, with some 2,600 service stations. The collection had made ERG a brand name among motorists. Today, ERG has no retail presence – it’s a B2B company – and most Italians have no idea what it does to make money.

ERG was one of the family-owned companies that helped Italy get back into business after the Second World War, and it thrived when the country’s “economic miracle” was in full swing in the 1950s and 1960s, the era when Italy scrambled up the value chain to become an industrial and design powerhouse that would produce some of the world’s best-known brands, including Ferrari, Vespa, Alfa Romeo and Maserati.

Edoardo Garrone, ERG’s founder, was an industrialist at heart and a product of his home city, Genoa, the gritty seaport, oil terminal and transportation hub on Italy’s northwest coast. Best-known as the birthplace of Christopher Columbus, Genoa would emerge as a key player in Italy’s industrial revolution. Garrone realized that petroleum was necessary to lubricate Italy’s wealth-creation machine and launched a small oil, tar and chemicals business in 1938 but made little progress before the war started a year later. After the war, which left much of Genoa in ruins, he opened a brick factory to help Italy’s reconstruction effort. In 1947, when demand for oil products was taking off, he built the San Quirico refinery in Genoa. 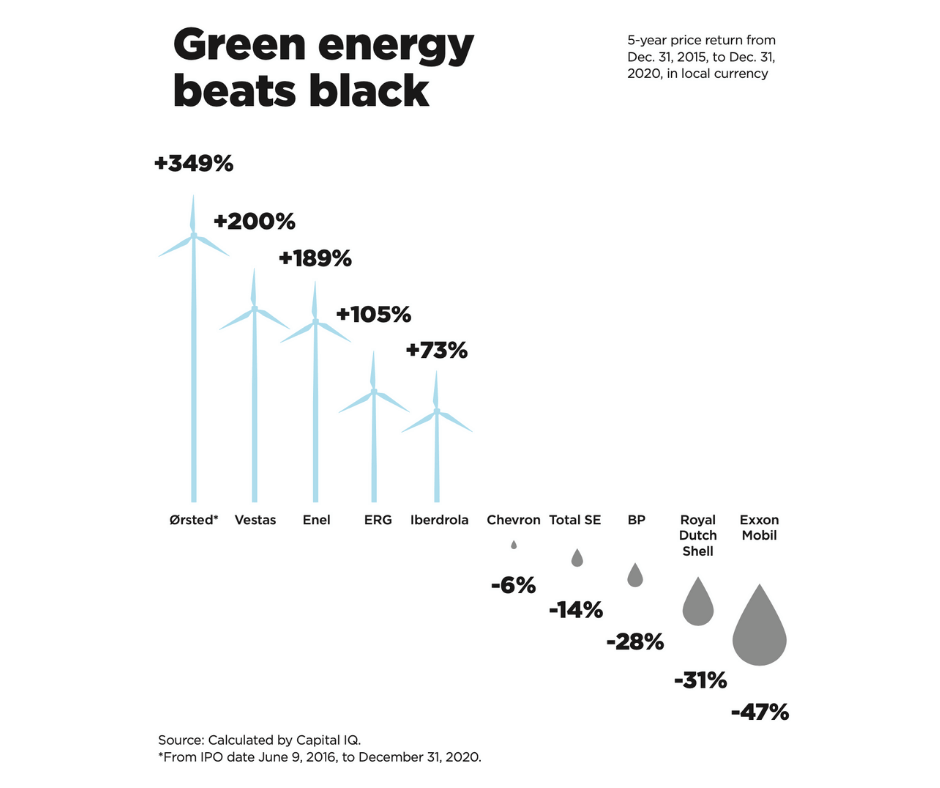 In the early 1950s, he created a fuel distribution and retail business under the ERG name, which stood for Edoardo Raffinerie Garrone – “raffinerie” is Italian for refinery. BP, then British Petroleum, became the refinery’s main oil supplier in 1958 and would become a minority investor in ERG. Five years later, Edoardo died of a heart attack on a fishing trip in Norway at age 57. His son Riccardo was pushed into action, becoming chairman at age 27. The young man expanded the company, and ERG joined an investment group, called ISAB, that built an enormous refinery in southeast Sicily in the early 1970s (ERG would take control of the refinery in 1985).

When the ISAB refinery opened in 1975, the energy markets were in crisis. The 1973/74 Arab oil embargo had sent crude oil prices up fourfold, and oil-importing countries went into recession. Demand for oil products sank, and price volatility became the norm – a fatal recipe for low-margin European refineries. In Italy, a dozen refineries, including ERG’s original plant in Genoa, closed between 1975 and 1989, by which time the Garrone family had realized there was no future in being a one-trick company; ERG had to diversify to survive.

The first diversification move came in 1993, when ISAB built an electricity plant next to its Sicilian refinery. The power was generated by burning the gases extracted from the refinery’s heavy-oil products. The plant opened in 2000, and the technology proved to be a great success. At that point, it was still unthinkable for the Garrones that ERG would be anything but a hydrocarbon company – old habits die hard. But the first decade of the 2000s rocked the company yet again, and new thinking emerged.

Bettonte, who joined the company in 2007 as chief financial officer, says the Garrones were slowly taking the view that their precious Sicilian refinery was becoming uncompetitive and that the industry’s rather violent price swings eliminated any hope of financial stability.

Demand growth for refined products was shifting to soaring Asian economies. The Saudis were building dazzling new refineries, as were Asian nations, with superior technology. At the same time, the world was realizing that the science behind climate change was real. In 2004, ERG made an opportunistic move into Italian wind energy, through a partnership with a Spanish company. Two years later, it made a big wind investment through the purchase of Milan-listed EnerTAD. A year after that, EnerTAD entered the French wind market. ERG’s black-to-green transformation was in full swing. 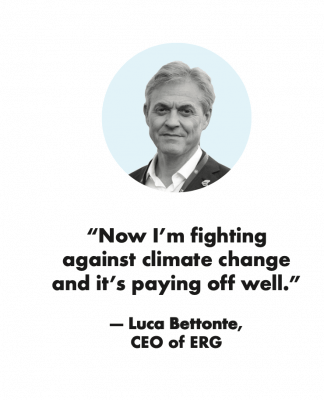 In one of the best-timed deals of the decade, ERG sold 49% of the Sicilian refinery to Russian oil giant Lukoil just before the 2008 financial crisis. Suddenly, ERG was swimming in cash and had to decide where to invest it. On cue, the investment bankers came knocking. One of them suggested that ERG pump its new fortune into healthcare; another suggested shipping. But ERG by then was smitten with clean energy. “We had a huge amount of money and had identified a fast-growing business – renewables,” Bettonte says.

The problem was selling the idea to ERG’s managers and employees, many of whom had spent decades building an oil company. “There was a lot of resistance from their side,” he says. “They were worried because they didn’t know about the renewable-energy business. They thought we would transform the company into a financial holding company that would invest in infrastructure. They thought we would cease being an industrial company.”
But the Garrone family – by then control had passed to Edoardo’s grandson and his older brother Edoardo, who is now chairman – backed the transformation, as did the other shareholders. ERG would be a renewable-energy company, dominated by wind power, with a strong presence in hydro and solar power too. And it would not act merely as passive investor in portfolios of clean energy – it would build. “I can’t say we made the decision because we wanted to save the world,” Bettonte says. “But the idea to go green played a part in it.”

ERG’s transformation has been remarkable. In 2013, the year it sold its final piece of equity in the refinery to Lukoil, the company emerged as Italy’s biggest wind-power player with the purchase of GDF Suez’s Italian wind farms. A rapid-fire series of acquisitions saw its onshore wind business blow across Europe, where it now has a presence in the U.K., Germany, France, Poland, Romania and Bulgaria. At last count, ERG had almost 2,000 megawatts of wind capacity in Italy and elsewhere in Europe, with another 280 megawatts under construction (as a rule of thumb, 1 megawatt can power 650 homes). It also had a big hydropower business in Italy, is pushing into solar power and has an enormous electricity plant in Sicily fuelled by natural gas. It’s the last vestige of its hydrocarbon heritage but one that, for now, is essential to ERG’s diversification strategy.

In 2008, only 3% of its earnings before interest, taxes, depreciation and amortization (EBITDA, essentially operating earnings) came from renewable power. By 2014, the figure was 73%. In 2019, 87% of its reported €496 million in EBITDA came from renewables. Investors have cheered the overhaul. From the end of 2007 through September 2020, ERG’s total shareholder return, including dividends, was 250%, greatly outpacing the FTSE Italia All-Share Index. Of the nine analysts who follow the company, there is only one “sell” rating, from Citigroup, which fears that the relatively high exposure to “short-lived” electricity subsidies makes ERG shares vulnerable.

Bettonte says ERG’s goal is to be the “bigger among the smallers.” More growth in Italy will be difficult, though the company is “repowering” its wind sites – replacing old turbines with much bigger and more efficient ones, an exercise that will produce four times as much electricity from half the number of machines. The growth will come elsewhere in Europe, and even that may be difficult, since overall electricity demand is not rising and coal-burning electricity plants are hanging on longer than expected in Germany, Poland and other countries. Getting permits for new renewable-energy projects is also a hassle. “Hydrocarbon plants are like car plants – they are hard to shut down,” he says.

But ERG knows it made the right decision to go green and also knows that renewable energy’s rise is irreversible as climate change is factored into every energy decision. “We are strongly committed to grow in this industry,” Bettonte says. “I am proud that we have become a climate-change fighter.”

Eric Reguly is The Globe and Mail’s European bureau chief.