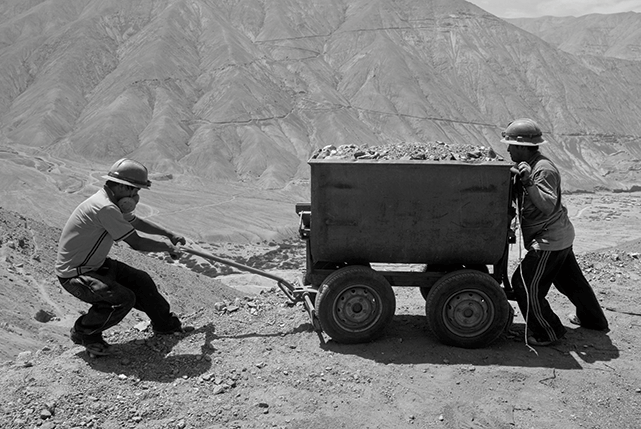 When Chavez began excavating at what is now the Santa Filomena mine, there were no roads and miners had to walk to the site, carrying heavy barrels of water on their backs. They descended 4,000 to 5,000 metres below ground, lugging the heavy mineral up on their backs.

“The search for work turned us into adventurers,” says Chavez with pride. “The physical exertion was tremendous. It was quite a sacrifice.” Even today the majority of Peru’s estimated 30,000 small-scale miners face abusive labour conditions, health problems from handling toxic chemicals and exploitation from gold buyers, bosses and labour traffickers.

But Chavez is now one of the happy exceptions: He belongs to a cooperative of about 900 artisanal miners who have formed their own company, called Sotrami. With help from non-profits, the company has brought in strict environmental, labour and human rights standards. In 2012, thanks to these reforms, Sotrami became Peru’s first mine to earn Fairtrade and Fairmined certification.

Certification allows indigenous miners to use their natural resources in a sustainable manner while earning extra profits on their gold, which are invested in community development projects. And it provides jewellers and consumers with the guarantee that they’re purchasing gold that has been mined with respect for the environment and human rights.

Gold has come under attack in recent years as the new ivory or baby seal skin – blamed for fuelling a bloody, decades-long war in the Democratic Republic of Congo, for deforesting the Amazon rainforest and for displacing and exploiting indigenous communities around the globe.

Reality is not so black and white. According to Fairtrade International, about 100 million people worldwide earn a living from artisanal and small-scale mining. Although artisanal miners produce only about 10 per cent of the world’s gold each year, they make up about 90 per cent of the workforce in gold mining, providing important financial support for their families.

But large-scale gold mining by transnational corporations has eliminated jobs by using high-tech machinery, depriving local indigenous communities of employment. Profits typically end up in foreign bank accounts, and most supporting services such as equipment repair and hotels are handled by outsiders. Across the globe, indigenous people are demanding the right to control and benefit from their natural resources, including mineral rights.

Some people within the jewelry industry have been listening. Greg Valerio is one of the founders of Fair Jewelry Action and has been calling for certified gold since the mid-1990s. At that time, most industry people said it would be impossible to certify gold because once it is melted down, it’s very hard to know where it originated. “I challenged the jewelry industry,” says Valerio. “They told me: You are mad, go away, you’re wasting your time and you’re wasting your breath.”

But the stubborn Brit continued his quest. In 2003 he met people from the Oro Verde mine in Colombia. This cooperative, run by local Afro-Colombians in a fragile ecological zone, was producing gold using chemical-free methods passed down by their ancestors, such as panning for gold in riverbeds. Certification didn’t exist yet, but Valerio took a gamble and marketed “green gold” wedding rings from Oro Verde, with instant success.

“The jeweller met the miner and bingo, we proved you can have certification in mining,” says Valerio. “You can trace where your gold came from, and you can turn it into a product and sell it to a customer at a premium.”

“It’s been a long process,” says Manuel Reinoso, vice-chair of ARM’s board of directors. The gregarious Peruvian is also an indigenous artisanal miner, with large muscular arms from a lifetime of manual labour.

Small-scale miners like Reinoso have a long history of clashes with the corporate mining industry. Peru’s trade union representing large-scale miners has called on the government to take a hard line against illegal miners who don’t pay taxes and aren’t subject to environmental regulations. In a published editorial, the union accuses illegal miners of “deforestation, pillaging, tax evasion, corruption and quasi-slavery labor tactics.’”

But certification changes the narrative. It requires small-scale miners to become legal operators – a step the corporate mining industry applauds. However, Reinoso and others admit that certification is still in its infancy and the majority of artisanal miners around the world still operate outside the law. One of the problems, says Reinoso, is that many national governments have set up bureaucratic obstacles to legalization, with excessive steps and paperwork that most artisanal miners can’t afford to complete.

On the other side of the spectrum, environmental groups have also viewed certification with some criticism. “The efforts to improve the safety performance and wages for small-scale miners are very important and laudable steps in the right direction,” says Payal Sampat of Earthworks, a U.S.-based environmental group. But that doesn’t address environmental risks, says Sampat, who has been calling on certification initiatives to set a firm timeline for phasing out the use of mercury and toxic chemicals by many small-scale mining operations. “The footprint of these mines is going to expand as certification systems become more successful, and some of these are inside protected areas and ecologically sensitive areas.”

Certification currently allows the use of mercury and cyanide, but miners must follow best practices, using the most environmental technology available. Fairtrade has also created a special label called “ecological gold” for mining processes that don’t use chemicals. This gold fetches a higher price for miners.

In Africa, ARM has joined forces with the Artisanal Gold Council, a Vancouver-based non-profit, to set up pilot projects using a chemical-free processing system. Their first training centre is already operating in Burkina Faso on an artisanal mining site of about 3,000 miners.

“The miners are really interested in the technical issues, in improving productivity,” says Yves Bertran Alvarez, ARM’s project manager. “Right now they’re losing a lot of gold through inefficient mining, so it means more gold for them.” He says that earning Fairmined certification will also mean increased profits for the miners, along with improved health and safety conditions.

If the project takes off, this could have major implications for Burkina Faso, a country with 200,000 small-scale miners and up to a million people earning a living from mining-related industries. And ARM is working on similar pilot projects in Senegal and Mali.

But as the fledgling certification movement grows, divisions have also emerged. In 2012, ARM forged an alliance with the Responsible Jewellery Council (RJC), an organization that certifies some of the jewelry and mining industry’s largest corporations, assuring consumers that their products are environmentally and socially responsible.

Over 150 jewellers and citizens signed a letter opposing the partnership, including Valerio, one of ARM’s founders. Many opponents felt that ARM should not join forces with large corporate interests, and that the organization’s strength was in remaining independent, small and community-based.

The RJC has also been tarnished by criticisms from environmental groups. Three of its members – major Swiss gold refineries – have been accused of purchasing illegal gold linked to the civil war in the Democratic Republic of the Congo and deforestation of Peru’s Amazon.

Those in favour of the RJC partnership say it will allow small-scale miners to sell to large refiners, providing them with a bigger market and integrating them into the global mining sector. But the move has led some ethical jewellers, such as Marc Choyt, to bypass ARM’s Fairmined label and go instead with Fairtrade.

Choyt is president of Reflective Images, a designer jewelry company in Santa Fe, New Mexico. He now buys his gold from Sotrami, the cooperative where Chavez works in Peru.

“In our society, people buy jewelry for symbolic, highly emotional reasons, like commitments and marriage,” Choyt says. “But the materials used in these products are resulting in toxic mercury poisoning and destruction of rainforests and indigenous culture. With Fairtrade gold, we’re trying to create a parallel economic model, something different.”

The choice is ultimately up to consumers. A wedding ring can hold the tears of indigenous peoples who have been displaced from their ancestral lands, or it can represent a more hopeful story: the struggle of indigenous miners around the world to rise out of poverty, and the risk taken by ethical jewellers to invest in a sustainable, more responsible world.