Geothermal developers often struggle to make their projects economically viable, while mining companies are finding it increasingly difficult to get social license for new projects.

Given these two market challenges, the U.S. Department of Energy (DOE) is taking a closer look at the idea of recovering minerals from the hot brines that geothermal power plants pump out of the ground. These mineral-rich fluids contain a variety of rare earth elements and other valuable metals, but at conventional geothermal plants the only thing that gets extracted today is the heat.

A wasted opportunity? That’s what the DOE thinks. Last summer, the department committed more than $4 million to nine geothermal projects aimed at recovering both heat and minerals from brines. Work on those projects started in October, with results expected by fall 2016 or earlier.

“This is effectively ‘solution mining by nature’, and minerals dissolved in these fluids represent potential resources,” according to a DOE paper presented in January at a geothermal energy workshop at Stanford University.

For geothermal developers, added revenues from harvested minerals represent a way to move projects forward that might otherwise lack a business case – for example, if the heat resource at a particular site isn’t quite high enough. For mining companies, geothermal mineral recovery represents a sustainable path forward for an industry under pressure to reduce its environmental footprint.

“This is the future of mining,” said Gary Billingsley, a director with Saskatoon-based Star Minerals Group, a partner in one of the DOE-funded projects. “It’s a natural step in the evolution of mining, and certainly something I’m pretty keen on.”

No such research is being funded by the Canadian government, despite the country’s vast mineral resources and efforts by the Canadian Geothermal Energy Association (CanGEA) to raise awareness of the opportunity.

“We are delighted that Star Minerals received DOE support for their innovation, but what can the Canadian, provincial and territorial governments do to create these opportunities at home with our own world class resources?” said CanGEA chair Alison Thompson.

Star is working with Pacific Northwest National Laboratories (PNNL), the University of Oregon, the DOE’s Office of Energy Efficiency and Renewable Energy, and consultancy Barr Engineering on the testing of advanced sorbent materials that can separate certain minerals from brine flows.

The two-year project will look specifically at ways to extract rare earth elements and precious metals. The sorbents already show promise based on preliminary tests conducted by PNNL, according to the DOE.

The sorbent is, in essence, a designer molecule attached to a substrate. The molecule has an affinity for grabbing specific metals out of the fluid that flows over it. It’s not an entirely new activity – the mining industry has been using a similar approach with what’s called “solution mining” for many years.

The innovation, explained Billingsley, is being able to strip those metals off the molecules at the kind of flow rates, volumes and low mineral concentrations characteristic of a geothermal power plant.

Star Minerals is particularly interested in rare earth elements such as dysprosium, a name derived from a Greek word that means “hard to get.” It’s one of several rare earth metals used to create permanent magnet alloys for use in electric vehicles, wind turbines and other green technologies. China dominates the market, so finding new domestic sources has grown in importance.

“If you’ve been in the industry for as long as we have, which is about 40 years, there are getting to be fewer and fewer places to mine, and fewer places to look for these particular types of metal,” Billingsley said. “To us, it’s a lot better if you can target recovering them from waste streams or geothermal brines or oil-field brines. It makes a lot more sense.”

It’s a message that Thompson of CanGEA has been sending to the mining industry over the past year. By working together, geothermal developers and mining companies can help each other out, she said. The association recently released a chemical analysis report showing the best places in western and northern Canada to mine for both heat and minerals. “It’s hard to get companies to take it seriously,” Thompson added.

One seven-year-old company that has taken it seriously is California-based Simbol, often considered the poster child of geothermal mineral recovery. Operating in the state’s Imperial Valley, it has partnered with several geothermal power producers, which after extracting heat from hot brine flow have agreed to let Simbol extract lithium, manganese and zinc compounds from the fluids before they’re injected back into the ground.

Based on the operations of a pilot plant between 2011 and 2014, Simbol knows its process works – at least for producing high-purity lithium carbonate, an essential ingredient of lithium-ion batteries used in electric cars – but efforts to break ground on a large-scale commercial plant this year have reportedly stalled. 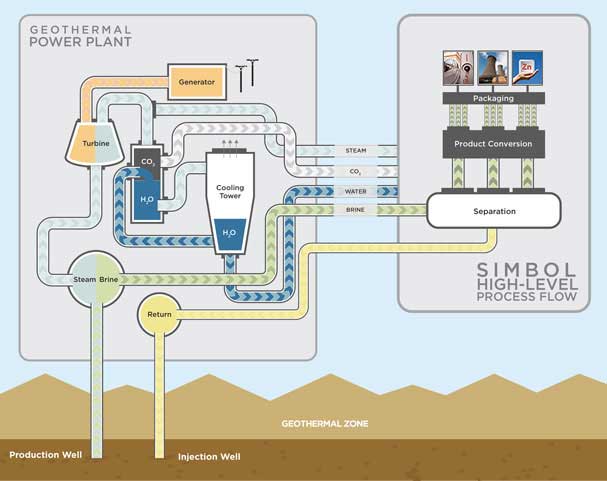 In February, it was reported that Simbol – which was one of the company’s that received DOE research funding last fall – had dismissed most of the employees working at its demonstration plant. It was a sign, some observers said, that the company is having a difficult time raising capital for its commercial plant, which at full production capacity is designed to produce enough lithium for more than a million electric cars.

Simbol co-founder Luka Erceg, who was chief executive before leaving in early 2013, said he has completely severed ties with the company but continues to believe in the larger mission.

“I’ve always been bullish on mineral extraction from brines,” he said. “This is clearly an area with a lot of potential.”

If it can be made to work with geothermal brines, the DOE believes the approach can also be used with fluids that are co-produced with oil and gas operations.