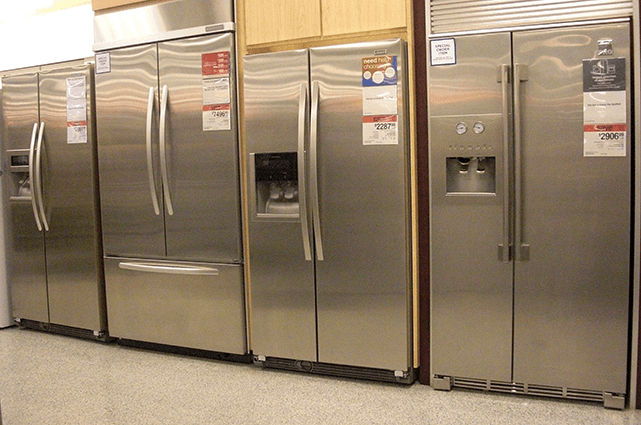 General Electric announced in September that it had successfully recycled 100,000 refrigerators and freezers through the UNTHA Recycling Technology (URT) system. The company estimates about nine million refrigerators are disposed of every year in the U.S. and shredded for metal, sending over 200,000 metric tons of foam and insulation to landfills. In 2011 it teamed up with the Appliance Recycling Centers of America, an organization that provides services for 175 utilities in North America, to establish an end-of-life recycling program within 12 states in the U.S. Northeast and Mid-Atlantic regions.

GE became the first appliance manufacturer to work with the U.S. Environmental Protection Agency (EPA) to comply with its Responsible Appliance Disposal program, by offering to remove old units for recycling when it delivers new refrigerators to customers. The URT is a 40-foot machine which deconstructs the refrigerator into two-inch pieces in under a minute. Greenhouse gases from the foam are captured in a closed system, while foam and insulation are converted into pellets and used as fuel in a cement kiln. Steel is sent to a mill, with copper and aluminum sold off to a motorcycle engine manufacturer. Only 5 per cent of the fridge material is not recycled.

Along with other appliance manufacturers, GE has faced criticism for contributing to a marketplace increasingly filled with disposable appliances that have become less reliable. Putting greater emphasis on end-of-life recycling for its products does not fully address this problem, but it does help mitigate the burden placed on utilities mandated with waste disposal. GE, which produces more than 500 Energy Star-approved appliances, has also partnered with the EPA on three other voluntary initiatives. These EPA programs include WasteWise, which focuses on waste reduction and saving environmental resources while reducing emissions, and SmartWay, designed to help lower transportation-related emissions by encouraging companies to use certified carrier partners with a track record in fuel efficiency and environmental performance. In 2005, GE launched its green-focused Ecomagination research and development program, which generated $21 billion in revenue for 2011. The company is on track to meet its 2015 goal of $10 billion in research and development for the program, with Ecomagination profits growing twice as fast as overall company profits.

Guatemalan officials announced on September 28 that they have arrested Mynor Padilla, the former head of security at the Fenix mine property near El Estor, Guatemala, on charges of murder and attempted murder. The mine was owned at the time by Hudbay Minerals, a Canadian mining company that acquired it as part of a merger with Skye Resources in August 2008. Skye Resources, which was then renamed HMI Nickel, controlled the Compania Guatemalteca de Niquel (CGN), which operated the ferronickel project. This was the first time Hudbay had controlled assets outside of Canada.

Following years of tension over disputed land rights with local Mayan Q’eqchi’, who claim they were driven off the land during the Guatemalan civil war, a meeting between the regional governor and protestors spiralled into a violent confrontation that left one protestor dead and another disabled. Witnesses allege that Adolfo Ich, an influential community leader, was surrounded by CGN personnel who attacked him during the daytime with machetes and then shot him in the head. Despite the controversial actions taken that day, the head of security continued to be employed by the company for over a year. Hudbay denies any wrongdoing, noting five security personnel were also injured that day. “Based on internal investigations and eye witness reports, Hudbay believes that CGN personnel were not involved with his death,” the company said in a statement. In August 2011, Hudbay sold the Fenix mine for $170 million to a Cyprus-based private equity firm.

Three lawsuits are currently in Ontario courts, two of which deal with attacks from security forces that day. The third lawsuit claims that before Hudbay acquired Skye in January 2007, 11 women were raped during a forced eviction from land near the Fenix mine. At the heart of the Canadian lawsuits is whether a parent company is liable for actions taken by subsidiaries in foreign countries.

Murray Klippenstein, the lawyer for Adolfo Ich’s widow, who brought forward one of the lawsuits, is encouraged by the arrest in Guatemala. “Now that the man that Hudbay allowed to be put in charge of security has been arrested for murder, we hope Hudbay changes its unsupportable position, makes amends, and takes real, concrete steps to ensure that similar severe human rights abuses never again are committed at one of its projects.”