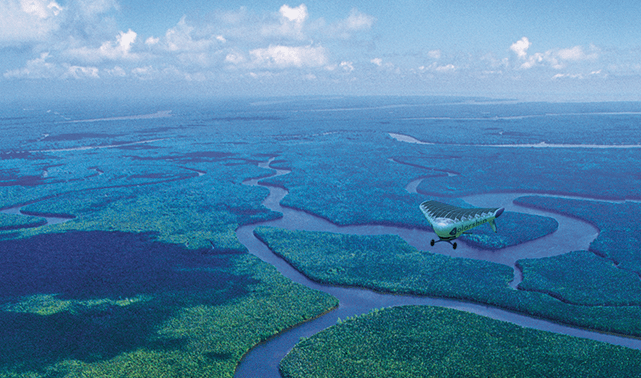 Extractive companies, whether hunting for oil or gold or chromite, face a growing problem. As demand for minerals, metals and energy rises, the search for new supply becomes increasingly remote and treacherous. Whether talking about offshore drilling in the Arctic, mining for gold in the most isolated regions of the Peruvian Amazon, or tapping into Ontario’s mineral-rich Ring of Fire, the challenges are the same: safely bringing people, equipment and supplies in and out of an area that has no roads or infrastructure – with as little impact on the surrounding environment as possible.

In the Ring of Fire, located in the most northern parts of Ontario, access is particularly challenging. Ice roads, increasingly unstable with the effects of climate warming, are often the only route for ground travel. Small propeller planes are a common mode of transportation, assuming the availability of sufficiently long runways or nearby lakes for take-off and landing.

Toronto-based Solar Ship has what it considers a better way, one that uses less or no fuel, can carry potentially larger weights and volumes, and which doesn’t need a runway to land – a clearing the size of a school soccer field will do just fine.

“It’s not about replacing current bush planes, it’s about complementing them,” says Jay Godsall, founder and chief executive of Solar Ship. “It’s about taking things they can’t take and delivering them to places they can’t go.”

Not quite an airship, not quite an airplane, Solar Ship’s unique vehicle is a hybrid of both. It’s a delta-shaped aircraft filled with helium, but slightly less than what airships use to lift themselves off the ground. Solar panels across the top of its body, backed up by a lightweight battery system, will supply enough power to drive it forward and into the air. In this way, the design achieves just the right balance of static lift (like a blimp) and aerodynamic lift (like a plane).

Because of the buoyancy it does have, it doesn’t require a lot of space to take off, and combined with its broad wingspan – which varies depending on the model – it can carry between 200 kilograms and several tonnes for thousands of kilometres. When the sun is shining, it needs remarkably little, if any fuel.

“Theoretically, we should be able to cut down on carbon emissions and costs a great deal,” Godsall says.

The Ring of Fire is a multibillion-dollar opportunity with the potential to create many thousands of jobs, he says. The problem is that communities in the area aren’t set up for that kind of rapid growth and activity, and they’re wary of the environmental consequences of that growth – what is often called “resource curse.”

It may be why Wasaya Airways, an aboriginal-owned airline based in Thunder Bay, and which pretty much has a monopoly on commercial air travel in the region, has signed a partnership agreement with Solar Ship.

“Their communities are going to be heavily impacted by this massive mining development in their backyard, and that will mean, at a primary economic level, just moving a lot more stuff in and out,” Godsall says. “But they have trouble with large volume payloads. How does someone pick up and deliver a pick-up truck, or 20-foot container, or on-site water purification system?”

Solar Ship has built a demonstration aircraft that will be hosted in Wasaya’s Thunder Bay hangars. It will be tested under a variety of conditions to determine whether it’s fit for the job. That being the case, Wasaya could end up being one of Solar Ship’s first customers.