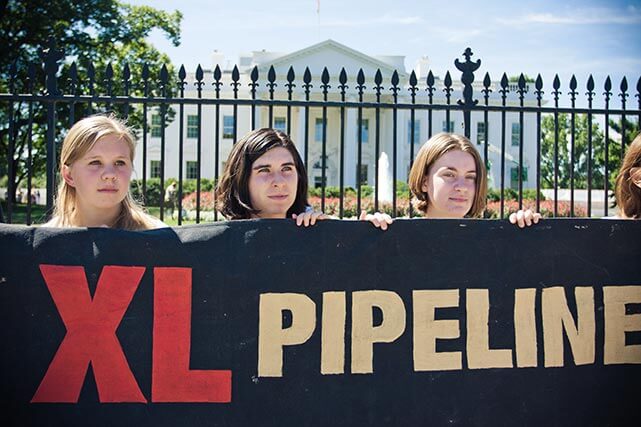 An anti-Keystone XL demonstration in front of the White House. Photo by Josh Lopez. Licensed under Creative Commons.

President Obama declared that the United States will contribute $3 billion to a fund that will help the world’s poorest countries deal with the effects of climate change, while Japan will contribute $1.5 billion. The leaders of both countries made the announcements at the G20 summit in Brisbane, Australia last weekend. It’s unclear whether the U.S. money will come from existing sources, or whether Mr. Obama will have to ask Congress for it.

The money will be directed toward the Green Climate Fund (GFC), the central financing mechanism put in place by the United Nations to help developing countries mitigate and adapt to climate change. An initial investment of $10 billion would be enough to get the fund going, Park Geun-hye, President of the Republic of Korea said at the UN Climate Summit in New York City, Corporate Knights reported in September. At that summit, France and Germany committed to contribute $1 billion each over the next four years, the Republic of Korea committed $100 million and Mexico committed $10 million. That brings the fund’s balance up to $7.5 billion. More countries will be asked to make formal commitments to the GFC at a pledging conference in Berlin later this week.

The Republican-led U.S. House of Representatives voted on Friday to approve the proposed Keystone XL pipeline that would carry crude oil from Canada to the U.S. gulf coast. The U.S. Senate is expected to vote on the issue tomorrow, but 15 Democrats will need to join the 45 Republicans in order to send the bill to the President for approval. “We are one vote short as we left last week. I know they’re burning up the phone lines and emails trying to find that vote to support the procedural move. I don’t know how successful they’ve been,” Dick Durbin, a Democratic leader in the U.S. Senate, told Reuters yesterday.

Regardless of how the vote goes, it seems likely that President Obama will veto the bill. He told reporters in Myanmar on Friday that the Keystone XL project only helps Canadians get oil to work markets and has little value for the U.S. consumer. “Understand what this project is: It is providing the ability of Canada to pump their oil, send it through our land, down to the Gulf, where it will be sold everywhere else. It doesn’t have an impact on U.S. gas prices,” Mr. Obama said.

Germany urged the European Commission on Friday to approve national-level bans of GMOs before next year’s harvest. Corporate Knights’ senior writer Ashley Renders wrote about the vote, which took place last Tuesday and would allow European countries to have the final say on whether or not GM crops can be planted on their soil, even after they have been approve for EU-wide use. This flies in the face of a proposed Canadian initiative that aims to get 15 countries to accept low levels of non-approved GMOs in their grain imports. The day after the MEPs voted on the E.U. bill, Agriculture and Agri-food Canada signed a trade agreement for canola worth $1 billion (CAD) with the Chinese government, which is more receptive to biotechnology.

Most aboriginal Canadians not fans of mining industry

A new survey reveals that only 38 per cent of Aboriginal Canadians have positive perceptions of the mining and mineral exploration industry. This the first time a national survey of this kind has been conducted among Aboriginal Canadians, even though their approval is critical to the mining industry. About 1,200 Aboriginal communities are located within 200 kilometers of 180 producing mines and more than 2,500 active exploration projects. “The survey will provide a benchmark upon which the industry can measure the effectiveness of ongoing engagement with Aboriginal people,” said Robert Simpson, chief executive officer of PR Associates, the public relations firm that conducted the survey. Mining companies can also use the results to gain social license and build positive relationships with Aboriginal communities, the company said in a press release.

EPA cracks down on methane emissions

The U.S. Environmental Protection Agency (EPA) signed two actions on Friday that will enhance transparency around the methane emitted by oil and gas companies, which is 80 times more harmful to the climate than carbon dioxide over the short-term. In the first action, the EPA eliminated certain monitoring methods for oil and gas sources that allowed companies to use “unreliable reporting methods to calculate emissions,” the EPA said in a statement. The second action adds new reporting requirements for previously unreported sources of methane emissions.