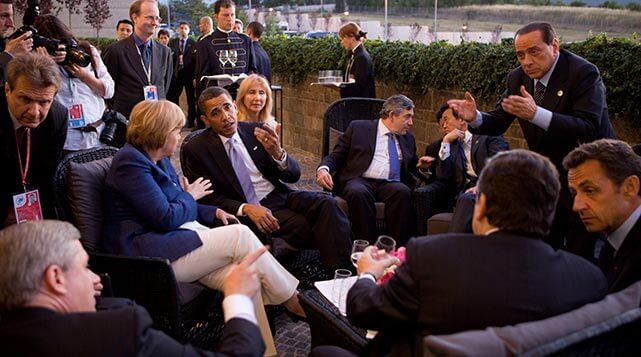 World leaders talk at a summit in Italy in 2009. Photo by White House (Pete Souza).

Tax transparency has received a lot of attention recently.  In an effort to end tax evasion via secret bank accounts, 51 countries signed an agreement last week to automatically share tax information. This came only a few days before the International Consortium of Investigative Journalists leaked documents revealing that 343 companies “have secured secret deals from Luxembourg, allowing many of them to slash their global tax bills,” of which a Canadian crown corporate was a part.

A report released yesterday by Transparency International shows that “the world’s companies disclose little or no financial details about their operations outside their home country.” The organization will also publish an open letter on Monday to G20 leaders, who are meeting in Brisbane, Australia next week, outlining the steps that leaders should take to stop public money from crossing borders illegally.

In light of the Luxembourg scandal, Transparency International is also asking E.U. finance ministers, meeting in Brussels tomorrow, to look at country-by-country tax disclosure laws that will show citizens how much companies pay their governments.

The U.S. and E.U. have already passed laws that will require extractive companies to report how much they pay governments at home and abroad for access to their resources on a country-by-country basis. The E.U. rules will be implemented by July 2015 and the Securities and Exchange Commission will discuss its second set of rules in March 2015. Canada tabled a similar bill last week.

While all of these laws are a step toward holding companies and governments accountable for the money that belongs in public coffers, it leaves out the most important question: are companies, particularly extractive companies, paying enough in the first place?

Research that I conducted with colleagues at Thomson Reuters Foundation (TRF) last year showed that oil and gas companies have a history of using various accounting sleights of hand to purposely underpay their royalties under leases on federal and Native American land.

Lawsuits settled by the Department of Justice and audits conducted by the Office of Natural Resources between 1990 and 2013 have resulted in over $730 million (U.S.) in settlements under the False Claims Act, over $53 million (U.S.) in civil penalties and over $2.2 billion in audits and checks that showed companies underpaid royalties on federal and Native American leases. This is money that could be used to pay for local schools, infrastructure, water conservation and other projects.

Tax transparency laws would not necessarily pick up on this lost money because as Lance Astrella, a lawyer who specializes in representing private lease-holders in royalty disputes with oil and gas companies explained to TRF, “It’s very difficult to determine whether [an oil] company is paying the right amount of royalties because so much of the business happens behind closed doors and is not included in the lease agreement.”

A lawsuit filed in 1996 by Eugene Wright, a Texas wildcatter who sued more than a dozen oil and gas companies for contract fraud on behalf of the U.S. government, highlights 19 different schemes that companies allegedly use to avoid their royalty obligations, none of which would come under scrutiny in any of the transparency laws currently being discussed.

This is a big deal because as Isabel Munilla, senior policy advisor at Oxfam American explained to TRF, “If this is happening in the U.S, where we have a strong legal and regulatory system, which should in theory reduce the incentives for this type of behaviour, it’s very likely to be happening around the world, especially in places with much weaker governance systems.”

Markus Meinzer, a senior analyst at the Tax Justice Network, a UK-based research and advocacy group, said “it is a no brainer in the 21st century to demand corporations to provide detailed disclosure of their activities that will allow citizens and journalist and campaigners to look at the data and independently assess and compare that data.”

As Markus said, it is a “no brainer” that companies should have to answer difficult questions about their operations at home and abroad. We just need to make sure we are asking the right questions.