Memorial Day barbecues and parades were thwarted this year in Houston when a massive storm dumped more than 10 inches of rain in two days, creating a Waterworld of flooded freeways, cars, houses and businesses, leaving several people dead and hundreds in need of rescue.

But it was a predictable disaster. That’s because, thanks to a pro-development bent, the magnitude of stormwater runoff has increased dramatically as Houston has sprawled across 600 or so square miles of mud plain veined with rivers, sealing under asphalt the floodplains and adjoining prairies that once absorbed seasonal torrential rains and planting development in harm’s way. Land subsidence from groundwater pumping and oil and gas development and, now, sea level rise and more frequent and severe storms are applying additional pressure from Galveston Bay, which sits just east of the city of 2.2 million.

The good news? Houston had already begun shifting gears, hoping to reduce the severity of future floods by reclaiming 183 miles of natural waterways that snake through the city and 4,000 acres of adjacent green space from industrial areas through a project known as the Bayou Greenways. The goal is to absorb rain where it falls, reducing the volume rushing into stormwater detention facilities, and to encourage biking and walking as “active transit” in the parks that make up the Bayou Greenways.

With these measures, Houston is beginning to embrace a worldwide trend in urban retrofitting — layering new infrastructure on top of old to help cities weather climate change. In many places, that includes reducing greenhouse gas emissions: shifting to cleaner energy, making buildings more efficient and improving public transit. For cities facing increased threats from floods and droughts, it also means adapting to a changing world by finding new ways to manage water.

The Memorial Day flood led Houston to postpone its planned celebration of the new Buffalo Bayou Park, a piece of Bayou Greenways. The flood was something of a test: While much of the city suffered because of the floodwaters the park passed with flying colors, acting as a stormwater channel while park infrastructure weathered the deluge as intended, Anne Olson, president of the Buffalo Bayou Partnership, a nonprofit organization focused on redeveloping and restoring the bayou, told a local news site.

Such water management projects can pay economic dividends to cities, says Henk Ovink, a Dutchman who was recently appointed by Dutch government ministers as the first special envoy for international water affairs for the Netherlands. Having danced with the sea and four river deltas for nearly a millennium, the Netherlands has created something of a cottage industry imparting hard-won water management wisdom to other countries — among them, the United States, the Philippines, Japan, Colombia, Vietnam, Korea, Bangladesh, France and Guyana.

Ovink points to the economic benefits reaped by London’s Docklands redevelopment project and Essen, Germany, which was recently dubbed European Green Capital for 2017 for remediating derelict coal industry areas with green infrastructure that enhances nature and biodiversity. Essen has built green and blue corridors and taken steps to address climate change, air quality, waste management and energy as it moves to a services and financial center economy.

“Waterfronts are turning communities’ faces back to the water as they become great urban places, parks, public amenities,” Ovink says. That in turn attracts new businesses by making it easier to hire good employees, which is a big part of Houston’s motivation, says Michael Bloom, manager of sustainability practice at R.G. Miller Engineers, a Houston-based civil engineering firm. 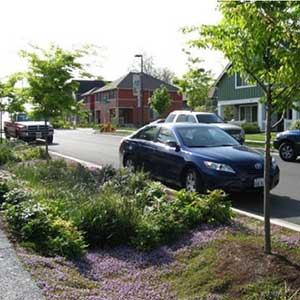 The extent to which cities are making natural infrastructure an integral part of their water management plans is new, says Katie Arkema, senior scientist at the Natural Capital Project, an early proponent of resilient infrastructure. Around the world — from Melbourne, Australia, to China’s “sponge cities” to coastal cities in New Jersey and Belize — urban planners are formally expanding natural stream and wetlands hydrology and ecosystems such as dunes, mangrove forests and coral reefs to better protect communities. Last fall the White House explicitly backed natural infrastructure as a tool to boost climate resilience.

“Natural” or “green” infrastructure tends to be more resilient to water stress than human-engineered infrastructure because it’s flexible; it bends, rather than breaks. The goal is to create a system that “functions as a living organism,” says Tony Wong, an early advocate of green infrastructure and founder and CEO of the Cooperative Research Centre for Water Sensitive Cities, which has hubs in three Australian cities, including Melbourne. Green infrastructure “mimics the functions of forests and wetlands and open spaces to serve and cleanse our cities,” he says.

It’s a reversal from the 20th century model that collected rain in detention tanks and lined rivers with concrete to move water away from built infrastructure as quickly as possible. That approach cut off rivers from their floodplains, raising water levels. And because concrete systems don’t flex, when they were inundated disaster struck.

As more cities formally embrace green infrastructure in their planning, it can be hard to remember how radical it seemed just a few years ago. In fact, in Houston, despite the Bayou Greenways project, it’s still pretty radical, says Bloom, who is active in local groups focused on water sustainability. Given Texas’ anti-regulation culture, “I can’t be too outlandish, but I do try to move the needle forward,” he says. He encourages developers to build swales swathed in native grasses as an alternative to concrete stormwater detention cisterns. One colleague dubbed them “beautiful ditches,” Bloom says, and their popularity is growing because they “add landscape attraction and usually cost less.”

Meanwhile, Wong’s home city of Melbourne has a complex challenge — one with which more cities are beginning to grapple. Even though it sometimes floods, Melbourne also suffers from the severe droughts that frequently plague Australia.

Like several other cities in Australia, Melbourne built a desalination plant in response to the recent 11-year drought. However, the facility is energy intensive and the water it produces is expensive, so it has sat idle since it was completed because the drought broke soon afterward, meaning cheaper, less energy-intensive sources of water were once again available.

But one approach can solve both drought and flooding, says Wong.

“If you look at the water balance in many of our cities, you will realize that the combined amount of stormwater … plus the wastewater, the sewage water, are in fact more than the water that our cities consume,” he says. By creating wetlands among buildings, expanding community gardens and urban orchards in public spaces, using gray water to water landscapes and flush toilets, Melbourne can reduce its dependence on dams and desalination plants to supply itself with the water it needs in dry times, he says.

Taking steps to restore a city’s natural hydrology can also clean polluted water. Many cities on the U.S. East Coast and Great Lakes were built with a combined sewer system. Stormwater is routed through the sewage treatment plant to clean it before releasing it into nearby rivers. It sounds like a good idea, but these systems are regularly overwhelmed during big storms — meaning that untreated sewage overflows into rivers.

While some cities have replaced combined systems with separate “gray” stormwater infrastructure to reduce the number of combined sewer overflow incidents, others, such as Philadelphia, are using green infrastructure to absorb more stormwater where it falls — which can be a cheaper way of dealing with the problem. Philadelphia reclaimed land along the banks of local creeks and rivers and built parks that can flood when necessary. That reduces the amount of water entering the sewage system during storms and also cleans it via the ground’s natural filtration. This Green City, Clean Waters initiative, begun in 2011, also gives incentives to private landowners to open natural water pathways with street tree wells, planted “bumpouts” in sidewalks, rain gardens, green roofs, urban agriculture and even porous pavement.

Such features act as “the kidneys of our city that filter the stormwater that carries all the urban pollution every time it rains,” says Wong, adding that they also beautify cities and enhance their microclimates. Wetlands and native grasses in Houston’s Bayou Greenways project are expected to filter 2 billion gallons of runoff annually, saving US$1.3 million in treatment costs, according to a report to the Houston Parks Board.

Seaside, enhancing natural ecosystems can also be cost-effective and deliver ancillary benefits. After Hurricane Sandy, the Rebuilding Task Force asked for input from Ovink, then deputy director general of the Dutch Department of Spatial Planning and Water Affairs. Ovink set up a competition called Rebuild by Design to inspire innovative rebuilding solutions. Green infrastructure was a critical goal of the competition, and a final task force recommendation was to build up and protect existing ecosystems, such as sand dunes. Now New Jersey is working to close the gaps between dunes in a massive sand dune restoration effort to protect homes. Although not everyone is on board, many local homeowners see the benefits. “People are saying, ‘I’d rather lose my view and have a big dune to protect my home,’” says Arkema.

Sometimes neither built infrastructure nor natural ecosystem enhancement can do the job, however, and the best solution is to withdraw from the shoreline entirely. Unfortunately, disasters are the quickest way to convince property owners to relocate. Tropical Storm Allison in 2001 killed 22 people and damaged 73,000 Houston-area homes, causing US$5 billion in property damage. The disaster prompted the Harris County Flood Control District to use money from the Federal Emergency Management Agency to buy out the hardest-hit homeowners, removing the structures from future harm’s way.

But dialogue and community engagement can sometimes work ahead of disaster. The Dutch recognized the importance of collaboration in water management way back in the 1100s, Ovink says, because if a farmer built levees around his house, the water would then inundate neighbors. “Our democracy started as a water democracy with regional water authorities, even before we were a kingdom,” he says.

A near-disaster can also spur change, says Ovink. Rising waters in the Dutch rivers Rijn, Maas and Waal in 1995 forced 250,000 people to evacuate. Although the waters eventually receded without flooding the towns, “it raised the awareness of how vulnerable our riverine system was,” Ovink says.

In response, the government created a national program called Room for the River. “This really meant making more room for the rivers, giving up the land and asking people to move,” says Ovink. Farmers were asked to give up land that had been in their families for generations. “This was not the government coming in and telling you, ‘You have to leave your houses,’” he says. “The government said, ‘These are the risks, here are some possible solutions. … We have to make room for the water.’”

Communities across the region came together to discuss the problem with experts and officials and ultimately agreed on solutions. “Instead of only building higher dams and dikes, we increased the capacity of our delta,” says Ovink, by pushing back dikes and widening floodplains. Some farmers were persuaded to give up their land; others agreed to let their land flood if necessary — after evacuating their cattle to higher ground. “It was a marriage between two interests: safety and community,” says Ovink.

It’s important to understand, however, that there’s not going to be a one-size-fits-all solution. “Cites are unique — built upon varied habitat with different weather patterns, economies and social values,” Arkema says. Interdisciplinary science and community engagement helps cities figure out what approach works best where.

A mental shift into the 21st century, which is going to continue to look very different than what we’ve known, also helps. The key, says Ovink, is to “try to live with water instead of fight it.”