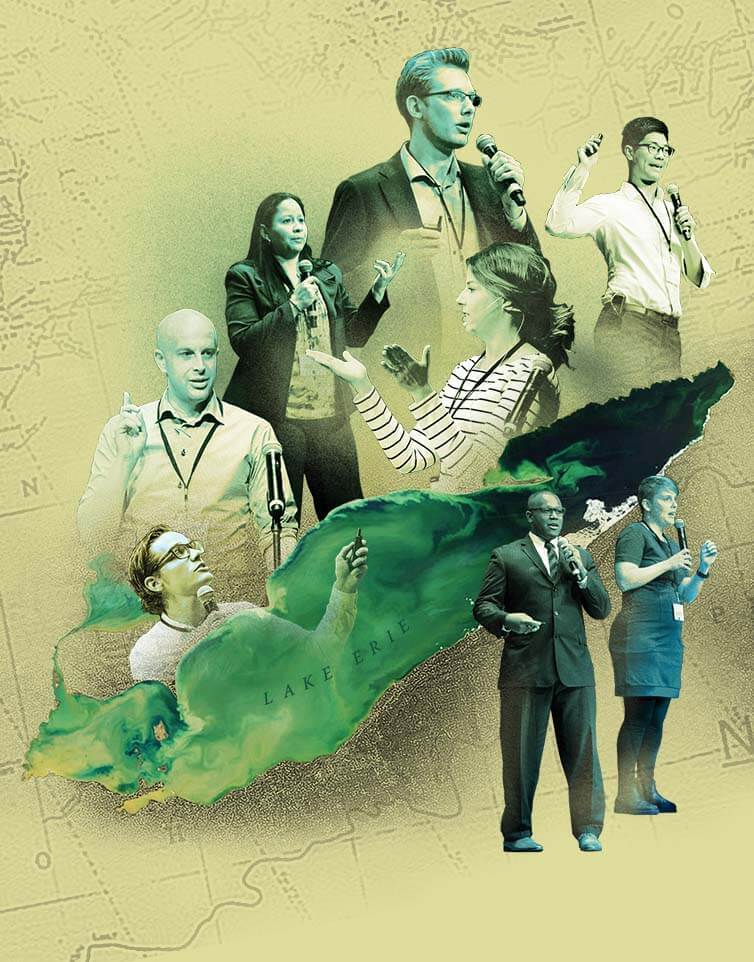 The hackathon format is new for the family-run de Gaspé Beaubien Foundation. Founded in 1990, the organization has typically guided its philanthropic largesse towards supporting family businesses and improving health resources – assistance that often takes the form of partnerships and investment. But when a younger generation of the family suggested the Great Lakes and St. Lawrence River region wasn’t as water secure as their ancestors thought, the foundation turned its attention to water issues plaguing the basin.

“We talk about problems all the time, but we want to focus on solutions,” says Claude Perras, executive director of the de Gaspé Beaubien Foundation. Rather than assume they or institutional experts knew best how to tackle worries facing the watershed, the hackathon format opened the field to a variety of international players from across disciplines.

“It becomes playful,” Perras says: “It’s a game, and people like to compete.” But be sure to lose any Silicon Valley-esque, Red Bull-chugging and late night pizza-scarfing image you may have of hackathons. Given the seriousness of the problems the teams were being asked to tackle, packing plans into 24-hour cram sessions didn’t make sense. Instead, the foundation staggered the competition over 10 months, allowing teams to meet, reformulate plans, work with Southern Ontario-based incubators like LaunchPad and Velocity, and polish their pitches.

After the 2015 and 2016 AquaHacking Challenges focused on issues facing the Ottawa and St. Lawrence rivers, the organization shifted focus in 2017 to the most vulnerable Great Lake – Lake Erie. Prospective teams of hackers were told to focus their solution on one of five broad categories: invasive species, algal blooms, citizen science, plastic microbeads or what they dubbed “Spreading #LakeErieLove.”

Thirty-two teams answered the call. Most came from Toronto, Montreal and Quebec City, but a small number registered from Chicago and one even signed on from the Netherlands. “The best teams are always multi-disciplinary,” Perras says. “You have engineers, water experts, you could [even] have a social scientist. The whole idea is that you need to develop solutions beneficial to society – and at the same time create a potential start-up.”

Far from generating theoretical solutions, the AquaHacking Challenge is premised on transitioning effective and scalable ideas into the real world. Finalists share $75,000 in prizes from the de Gaspé Beaubien Foundation and its partners in the form of cash, incubator workspace and pro bono legal and business services. The ultimate winner also receives one-on-one time with venture capitalists familiar with water technologies.

Forming businesses from hackathon ideas is no empty promise. Since winning the inaugural challenge in 2015, Kat Kavanagh’s citizen science project, Water Rangers, has connected conservation authorities and lake associations with real-time water data like pH and dissolved oxygen levels. “As a web designer I saw this great opportunity to create something that connected everyday people who care about lakes and rivers with technology that might help them understand the issues affecting their water,” Kavanagh says.

Water Rangers has found partners for its app-based platform in Alabama and Florida, but its focus remains on the Ottawa Valley and western Quebec where Ottawa Riverkeeper (a partner in the 2015 AquaHacking Challenge) has been instrumental in connecting Kavanagh’s business with partners and potential investors.

Before shuffling into the auditorium at the Centre for International Governance Innovation, the teams stood in clusters around high tables, poring over notes and fiddling with lanyards. Some participants paced around fountains in the outdoor foyer. One man sat alone in the sun, eyes closed and hands clasped in his lap as if in silent meditation. Lights flickered, telling everyone to find a seat in the darkened theatre. The presentations were about to begin.

Ideas presented ranged from practical to doe-eyed and back again. Gamification was an early favourite of many who aimed, Pokémon GO-style, to connect people with local Erie landmarks while collecting digital tchotchkes. These teams seemed unaware of just how spatially massive Lake Erie is. Others focused on enhancing citizen science, part of a broad approach that numerous teams embraced to collect user data affecting things like beach closures.

The panel, including judges from The Water Institute, WaterTAP Ontario and Velocity, among others, ultimately selected five teams that went straight to the source in tackling Lake Erie’s woes. ImPONDerable is developing a kit to help Erie residents detect unsafe water conditions, while eMagin is proposing to work with wastewater utilities to reduce untreated sewage spilling from combined sewer overflows directly into the watershed. SIM Labs is constructing hardware to classify and enumerate cyanobacteria, a form of bacteria found in algal blooms that can carry lethal toxins. PolyGone, meanwhile, was making a device to capture 90 per cent of plastic microfibres shed from fleece clothing in household washing machines.

The fifth team, Fertilizer Burn, is manufacturing a device that assists farmers in determining how much fertilizer is present in their soil, with the aim of reducing the volume of nitrogen and phosphorus, two leading causes of algal blooms, applied to their fields. “Our goal,” Fertilizer Burn’s Rebecca Swabey told the crowd, “is a soil lab for every farmer.”

Few believe the solutions proposed at the AquaHacking Challenge will revolutionize how society tackles multi-dimensional (and multi-generational) problems facing Lake Erie. Algal blooms alone have been Erie’s summertime scourge since the 1970s. Without radical alterations to agricultural practices, blooms are unlikely to cease – with or without citizen data.

“We shouldn’t kid ourselves that [the solutions proposed] are going to solve all the problems” facing Lake Erie, says Kevin Boehmer, managing director of the University of Waterloo’s The Water Institute, noting that “complex problems need complex solutions.” But many hackers brought together by the de Gaspé Beaubien Foundation will propose solutions that stand on their own.

“Hackathon participants are committed – it’s almost like a benevolent cult,” Boehmer says, a format bringing people “committed, enthusiastic and passionate about the technology side” to contemplate, in new ways, the water problems facing the 40-million-plus people living in the basin.

With the winner announced in Waterloo on September 13 (SIM Labs), the de Gaspé Beaubien Foundation will now turn its attention to the next AquaHacking Challenge for Lake Ontario in 2018, followed by a binational challenge that may take place in Chicago in 2019.

It’s all part of a plan to engage the next generation of clean water advocates, those not beholden to old solutions or outdated ways of thinking, says Claude Perras. As they grow the movement to find solutions to our water problems, the goal is to allow youth, students and water researchers to begin expressing their ideas for improving local watersheds in language that everyone understands.

“You convert them,” he says, into “water ambassadors and water entrepreneurs.”