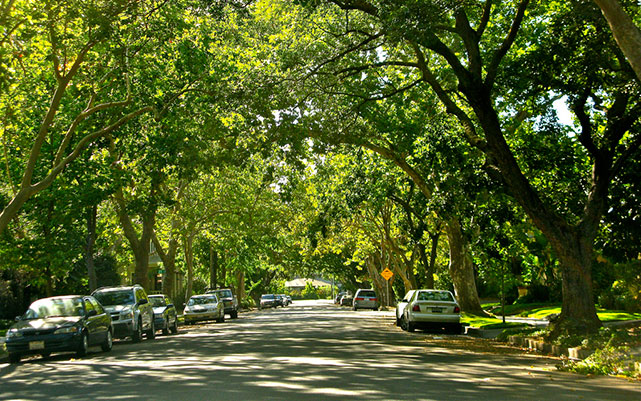 Portland, New York City, Milwaukee and Atlanta are among the cities that have quantified the payoff from pines and palms, olives and oaks. It’s part of a breakthrough in thinking among city planners in recent decades who now realize that a city runs not just on engineering, but on biology and ecology as well.

What’s a tree worth?

Tampa, Florida demonstrated that kind of thinking in moving its leading tree official, Kathy Beck, from the Parks and Recreation Department onto its chief planning team. Tampa approaches trees as part of a green public works system, the living equivalent of roads and bridges. It’s a case of what Beck calls “green meets grey.”

Part of how Tampa gets it right on trees is that planners can shield themselves from partisanship, protest and profit motives by relying on science to decide on what, where and how many trees to plant.

To get the biggest bang for tree planting and maintenance bucks, Tampa turns to my colleague, University of Florida Institute of Food and Agricultural Sciences urban forester Rob Northrop, for information on which trees provide the greatest shade, which can be planted closest to sidewalks and parking lots without root growth buckling pavement and which species best withstand floods in a city already impacted by sea level rise. University of Florida scientists Michael Andreu, Andrew Koeser and Paul Monaghan and the USDA Forest Service’s Geoff Donovan have also provided valuable expertise.

Northrop and other natural resource scientists see intrinsic value in trees. But he recognizes the tremendous economic pressures communities are under, so he and economists collaborate to get at the straight-dollar costs and benefits.

The most recent study of Tampa’s trees estimated that they save the city nearly $35 million (U.S.) a year in reduced costs for public health, stormwater management, energy savings, prevention of soil erosion and other services.

Drilling down even further, the University of South Florida has begun mapping individual trees. So planners know, for example, that the live oak on the 4200 block of Willow Drive has a 38-inch diameter and a $453 annual payoff.

Through the painstaking work of compiling an inventory of a city’s green infrastructure, policymakers can make more informed decisions on where to focus resources.

Just as the most decrepit or most used roads get more attention, key trees might get pruned or watered more often. Tampa has assessed the health of trees that line its evacuation routes. This kind of information would have been valuable to transportation officials in the San Francisco area, for example, before a commuter train was recently derailed when it struck a fallen tree.

Other cities recognize the importance of urban forestry. The Atlanta Tree Conservation Commission, for example, is appointed by the mayor and City Council to oversee urban forestry. Portland, Oregon, has a Parks and Recreation Urban Forestry Division that manages and regulates 236,000 street trees and 1.2 million park trees.

But in general, few cities employ people with deep expertise in urban forestry.

The Society of American Foresters didn’t start accrediting university programs in the discipline until 2005. There’s not even consensus on a definition of urban forestry, though Beck, from Tampa, describes it as the science of addressing both people with tree problems and trees with people problems.

In coming years, the nation will continue to grow and urbanize. One study suggests that in the next half-century, seven million acres in Florida alone could convert from rural and natural to urban use.

The push into formerly natural areas will bring with it more impacts on trees. At the same time, we’ll need trees more than ever to create and maintain liveable cities.

Let’s love our trees. More than hugs, they need science. The quiet efforts of planners and scientists are our best bet for green cities that inspire us to marvel year-round at the natural canopies above us and the ground beneath our feet.